A funny thing happened when Quaker Steak & Lube decided to create a new prototype restaurant that was half the size of its typical location.

The 46-year-old casual-dining chain has long been known for its large and loud restaurants. Its 43 locations, spread mostly through car-loving Rust Belt states and into the South, are as large as 10,000 square feet and are often decorated with full-sized cars and motorcycles hanging from the ceiling, along with a lot of other automobile memorabilia.

But the chain struggled and filed for bankruptcy protection in 2016, after which it was sold to truck stop operator TravelCenters of America (TA) in one of the more unique deals in the restaurant space in years.

Under new management, the company has tested a smaller prototype—about 5,000 square feet—that did away with a lot of those full-sized cars.

“We’re not sacrificing sales or anything,” CEO Bruce Lane said in an interview with Restaurant Business. “Our restaurants average $3 million a year in sales. We’re doing that in a 5,000-square-foot or a 10,000-square-foot building.”

“The math is hard to dispute.” 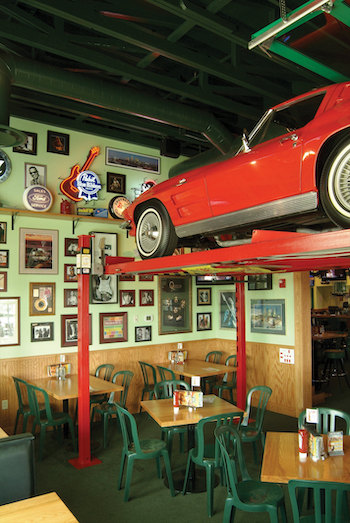 The chain was founded in Sharon, Pa., in the wake of the 1973 oil crisis, when George Warren and Gary Meszaros sought to preserve the heritage of old gas stations and muscle cars. The original restaurant featured a 1936 Chevrolet on a hydraulic grease rack.

The chain specialized in steak, but over time became known for its chicken wings and sauces. It struggled coming out of the recession and filed for bankruptcy protection in 2016 with a $25 million deal to sell the chain to TA.

Ohio-based TA is well-versed in the restaurant business. The company operates 650 restaurants and is a franchisee of some 40 brands. The company saw the Quaker Steak’s gas station theme as a good fit with its centers.

To be sure, Quaker Steak has shrunk since the sale. The company operated “more than 50” restaurants at the time of the deal and had 50 at the end of 2017, according to Technomic Ignite data. It has 43 locations today, meaning it has shuttered 14% of its locations in just more than a year.

TA did have to adapt to the fact that it is a franchisor, not just an operator. “We had to realize it wasn’t just our P&Ls we were worried about,” Lane said, referring to profit-and-loss statements.

“When we wanted to do something, at TA we could do it and write a check and make it work,” he said. “As a franchisor, you have to think about franchisees’ return, investment-level sales, and profitability. It made us much better operators of our own restaurants. We look for positive return on investment on almost everything we do.”

Quaker Steak found it could do good sales in an “express” unit of about 3,000 square feet. It typically doesn’t offer a full bar, but it opens up the chain to college campuses, airports, and food courts.

TA’s focus on franchisee profitability also came into play as the chain looked to develop its typical prototype.

The environment has been increasingly difficult for casual-dining companies. And Quaker Steak’s older model was getting both expensive to build and costly to operate, especially in a time of rising labor costs.

Plus, Lane said, “If you can find them, they are relatively expensive.”

The smaller locations are easier to find and cheaper. But with 5,000 square feet, Quaker Steak doesn’t have the real estate for all of the full-sized vehicles. “The return on investment is better when you can fill the space with tables and seats,” Lane said. “The overall transition is being received very positively.”

There’s another benefit. “They’re easier to clean.” It takes time, after all, to clean a car—even one hanging from the ceiling.

To be sure, the loss of some of the traditional decor has caused some consternation with customers who grew up visiting the restaurants and seeing the old cars. But Lane said the theme is still there, even if there are fewer cars and bikes.

And the rest of the chain is the same. “We’re still giving the same experience to the guest,” Lane said. “We have the same events. We’re still going to put concerts in the parking lot and bike shows, cruise-ins and the best of all the rest.”

Editor’s note: This story has been changed from its original version to correct the number of locations the company and TravelCenters operates, and to add context about the reduced number of Quaker Steak and Lube restaurants.