Rocco’s Ristorante & Pizzeria is an institution in the Encina Grande Shopping Center in Walnut Creek, California. The 13-year-old restaurant anchors a space filled with five other restaurants, including an Applebee’s, Taco Bell and Papa Murphy’s. But owner Rocco Biale doesn’t sweat the competition. He welcomes it. 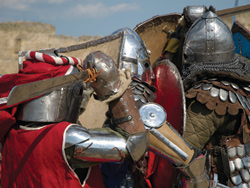 “Each new restaurant is another reason for people to come to the shopping center,” says Biale, who rarely has trouble packing his 8,000-square-foot space. “People aren’t going to eat out at the same place every night anyway.”

Tim McEnery, founder and CEO of Cooper’s Hawk Winery and Restaurant, a chain of eight restaurants in Illinois, Indiana and Wisconsin, is more wary. His restaurants have faced competition since he launched the first in Orland Park, near Chicago, in 2005. He wishes their rivals would just go away.

Who’s right? Well, they both are, according to Fred LeFranc, founding partner of Results Thru Strategy, a Charlotte, North Carolina-based restaurant consultancy.“Developers try to convince us that a rising tide lifts all boats when they want to install a new restaurant in one of the malls where we are operating. But I would rather be the only game in town any day of the week,” says McEnery, who plans to expand into three more states in the coming months. “Every customer that goes to the competition is one less for us.”

“For the first time in decades, the restaurant sector is contracting instead of expanding,” LeFranc says. “It’s becoming a zero-sum game: You can’t get a customer without taking him from somebody else.” Competitors are the only things standing between you and more business. Fire up the steamroller!

Easy, tiger. At the same time, the only way to expand the pool of potential customers is to grow the market, and that means drawing more consumers out of their homes with new and more inviting restaurants. Competition can expand the pie.

What’s a growing restaurant to do? The answer, according to LeFranc, is to focus on your customers—and use the competition to improve yourself.

For some restaurants, it may even make sense to work with the competition. Biale teams up each year with other local restaurants—including a fried chicken stand, a sushi restaurant and a burger joint—to raise funds for the Walnut Creek Chamber of Commerce. “We might technically be competing, but in reality it helps build a community around local restaurants,” Biale says. “We’re all in it together.”

Robert Ancill, CEO of The Next Idea, agrees. His Los Angeles-based consulting team advises restaurateurs around the globe that areas full of restaurants become hot spots that draw consumers to come out to eat. They help create a scene. “Many people don’t even decide where they are going to eat until they arrive,” he said. “If you get rid of all the competition and are the only game in town, chances are fewer people will show up.”

It’s the same rationale for putting competing car dealerships cheek-to-jowl on the same strip, or locating all of a city’s theaters in the same vicinity.

McEnery doesn’t take any chances. When competition rolls in, he calls HQ and dispatches the Cooper’s Hawk operational support team, who makes sure that particular location is running at peak efficiency. They retrain waitstaff, kitchen crew and bartenders. They suggest price and menu changes, too.

McEnery also tries to stay one step ahead. “I read every magazine, visit every restaurant. And I’m open to tweaking anything I think will give us an edge, whether it be price points, specials or our entire service model,” he says.

Owners shouldn’t fear competition; they should get to know it. “Don’t wait until a competitor comes into the market to start doing research,” says Small, noting that it’s never a good idea to try to put your competition out of business. “Another restaurant will just replace it. ”

Retooling is a given. But LeFranc says that some restaurants benefit outright from competition, such as when a less popular restaurant fills seats thanks to overflow from a more popular one. Some shopping malls use collective advertising funds for co-promotion campaigns. And then there’s the time-honored tradition of restaurant kitchens sharing ingredients when another kitchen runs short.

And the competition will vary depending on the type of restaurant you run. For instance, if you run a casual eatery, the battle may be fought with lower price points to attract fickle lunch and dinner customers. But if you operate a high-end restaurant, competition can be less of a direct threat, with customers deliberately choosing to patronize your dining room.

Neighboring eateries may simply agree to be “frenemies,” and that’s fine. Yet how a restaurant channels its response to competition is what sets the most successful operations apart from the pack. LeFranc’s advice: Improve the value of your business—an approach Biale and McEnery have both used with good results.

“Price wars and other aggressive tactics are a slippery slope and can wind up hurting both businesses,” LeFranc warns. “Today’s market is about value. If your focus is on finding ways to improve your service and your product, you’re on the right track.”