When even the smallest profit increases are major victories for restaurateurs, neglecting to examine fixed costs such as trash removal is like throwing away money, says Dean Corbett, owner of Corbett’s: An American Place and two other Louisville, Ky., restaurants. 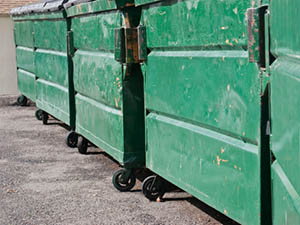 Corbett negotiates his own waste contracts for his freestanding buildings, but for many operators with restaurants in strip centers or malls, trash costs get lumped into common area maintenance (CAM) fees. And while restaurateurs might assume the CAM fee is fair, Jack Fletchner, a VooDoo Barbecue & Grill franchisee with three units across South Florida advises operators to dig for more information to be sure.

Lean on the landlord. “You can work to get [the CAM fee] lowered by asking the landlord to shop it around,” says Fletchner. “The point is to not ignore the issue. Trash costs are in the neighborhood of what some pay for utilities, so it’s not a nominal cost.”

But trash removal shouldn’t be significant when viewed as a percentage of overall sales, says Tom Kohler, owner of Premier Accounting Services in Louisville, Ky. “I have clients who pay as little as $125 per month per store and other very high-volume restaurants that pay $1,000 a month. But you’re talking a tenth of a percent in both cases,” says Kohler, a former CFO for Rally’s Hamburgers who started Premier to handle accounting for restaurant franchisees.

Kohler says it’s highly unlikely large, multi-tenant landlords will share how much of their CAM fees come from trash removal. As a partner in Yang Kee Noodle, an Asian-inspired fast-casual concept in a Louisville mall, Kohler says his landlord gave him a CAM price that wasn’t itemized. “You really don’t have a clue about how much of that CAM fee is trash removal,” he says. But while they may not disclose details, it’s still worth it to talk to the landlord about lower fees.

Keep in mind, landlords sometimes need a little grace when they lack the wiggle room to change CAM costs favorably, operators say. They may have signed a too-costly trash deal or the municipality could have rigid environmental rules that increase costs.

Read the fine print. Operators of freestanding restaurants need to scrutinize garbage contracts before and after they’ve signed the dotted line, says Dan Schneider, CEO of SIB Development and Consulting in Charleston, S.C.

In auditing operating costs for small and large restaurant chains, Schneider’s firm occasionally finds that prices in initial agreements aren’t reflected accurately in monthly bills. “The bill comes, and it’s loaded with all these environmental and fuel surcharges that could raise the price 35 percent,” Schneider says.

It also happens that the agreed-upon price is fixed just for the first year and leaps 20 percent in year two. “You’ll get some firms that raise their prices every nine months instead of every year, too,” Schneider says. “Be really careful of contracts that auto-renew. You don’t want to get locked into a price that’s unnecessarily high if you think it should be lowered.”

Don’t be silent. Schneider says it’s common for a restaurant manager to negotiate a new and better deal without telling the accounts payable department to look for and confirm the new price when the bill arrives. “The old price stays the same and nothing changes because nobody said anything,” he says. “These companies are really aware of how restaurants work and they’ll take advantage of that.”

Fletchner recommends operators in facilities hosting multiple restaurants talk to one another and band together to negotiate a fair trash removal rate. Not only will the landlord listen more attentively to a group, he says the team effort removes the stigma of being “the problem tenant.”

“Recycling programs are good,” Schneider begins, “but be careful you’re not paying more to have those materials hauled off.” Depending on a restaurant’s proximity to a recycling center or composting source, the cost of the effort may offset any trash hauling savings. Waste haulers themselves are good sources for learning about those costs, and local government websites also have helpful information. “It’s a tricky balance, but if you can save money overall, it’s worth looking into it,” Schneider says.