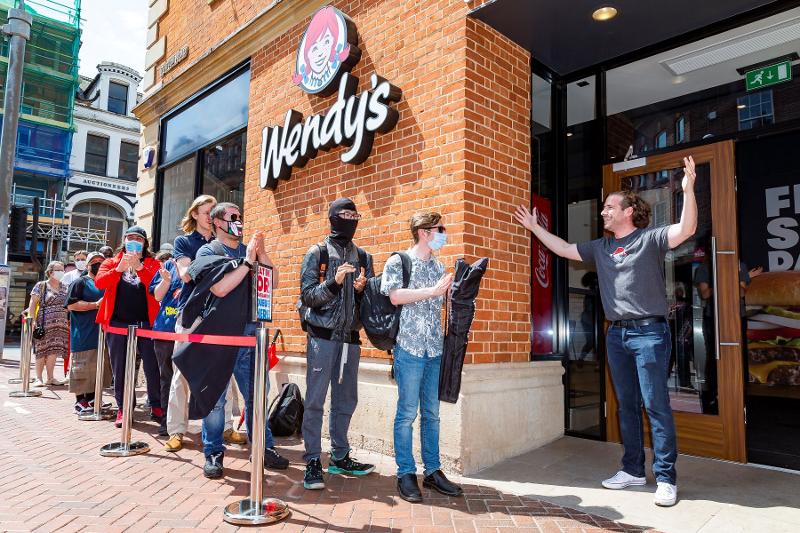 Photo courtesy of The Wendy's Co.

Wendy’s opened a restaurant on a street corner in Reading, U.K., on Wednesday, an event that marked the company’s return to a country it had left just more than two decades ago.

It also marks the company’s renewed commitment to international growth. Wendy’s, which has successfully added breakfast in the U.S. and is implementing new technology in its restaurants, hopes to join rivals McDonald’s and Burger King as being omnipresent around the world.

The United Kingdom is an obvious beachhead. The company believes it could build 400 locations in the country, making this location particularly important—though it has four more locations planned to open this year.

“We’re getting more and more excited about the U.K.,” CFO Gunther Plosch said last month. “The U.K. consumer seems to be ready for us. We have built a robust franchise pipeline.” That includes 20 potential operators evaluating the market, among 150 new franchisees considering building Wendy’s locations outside the U.S.

To be sure, it’s hardly the only big U.S. brand that hasn’t quite found its footing in international markets—both Chick-fil-A and Taco Bell operate relatively small percentages of international restaurants despite their domestic success.

International growth is important for these large brands because domestic growth has slowed and competition remains fierce for the types of drive-thru sites most of these big brands want. Wendy’s is smaller today than it was a decade ago even after adding about 160 U.S. locations since 2016.

Wendy’s wants to have 7,000 global restaurants by the end of this year and 8,000 by the end of 2025. The company expects a “good mix” of international and domestic unit growth.

The United Kingdom makes sense as a beachhead because the company already has fans in the country—particularly of its irreverent social media account. Abigail Pringle, president of international for Wendy’s, said in an investor presentation in 2019 that the company worked to understand consumers in the country and built a supply chain there along with marketing partnerships.

The Reading location features a three-foot-tall bronze statue of a Frosty just above the entrance of the building. The location also features menu items that are unique to the U.K., including a Veggie Stack, Veggie Bites and an Avocado Veggie Salad.

“Our restaurant opening in Reading is very exciting for Wendy’s as it marks the official launch of the brand in the U.K. and across Europe,” Pringle said in a statement. “Our team is working on opening additional restaurants across the country, starting in the southeast, and establishing new franchisee partnerships to help us quickly scale and expand our brand presence.”