Observers have had a hard time explaining why restaurant traffic has declined over the past few years, but we have at least figured out who is eating out less.

According to Technomic Ignite consumer data, the percentage of men who say they eat out once or more per week has declined each of the past two years.

By comparison, women have been pretty consistent at between 67% and 68%. 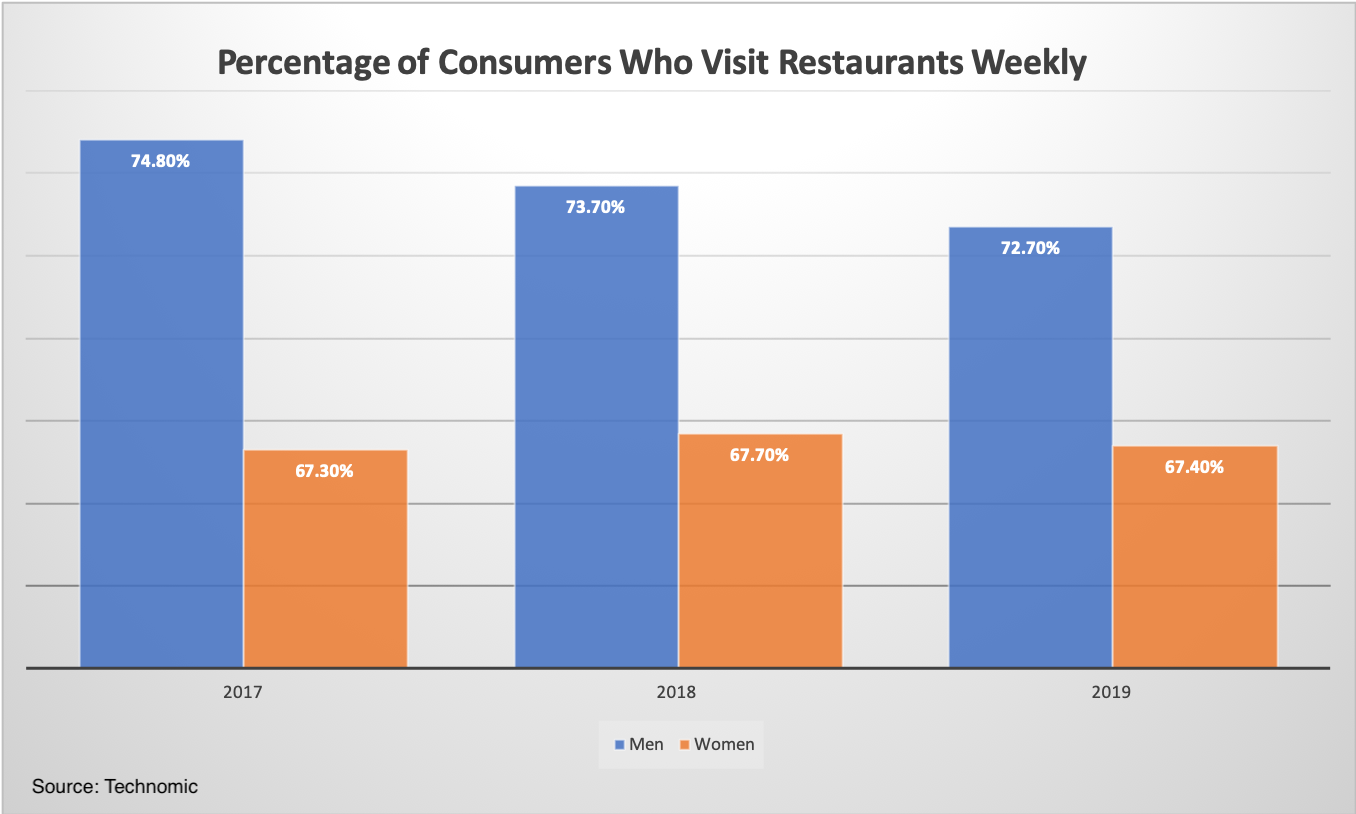 Exactly why this is happening is uncertain, but Robert Byrne, senior manager of consumer insights for Technomic, has an idea.

“It’s price,” he said. “What we’re looking at is a price-based inflection point.” (Technomic is a sister company of Restaurant Business.)

Numerous restaurant chains have struggled to generate traffic, and many believe that higher prices and an overt focus on premiumization, along with strategies such as kiosks and delivery that increase average check, are ultimately reducing visits.

This is notably true in the fast-food space. McDonald’s same-store sales rose 5.7% in the second quarter, and its traffic still fell. The chain is selling more Quarter Pounders and customers are adding more items to their orders. But it’s also raising prices on many items and some believe that’s reducing frequency.

Burger King in the second quarter generated just 0.5% same-store sales growth in the U.S., and company executives blamed the lack of value.

“We did not have strong enough offers and messaging throughout the quarter,” said Jose Cil, CEO of Burger King parent company Restaurant Brands International, on Friday.

Men tend to be big users of fast-food chains, particularly concepts such as Burger King. If they are using restaurants less often, it can help explain such chains’ difficulty in generating traffic growth.

Byrne believes that it’s men ages 25 to 34 who are reducing their visits the most, and he believes that’s the age where price-consciousness really kicks in.

“They’re not just feeding themselves,” he said. “They have families, kids, significant others. You can only take price so far before it impacts trips.”

To be sure, there could be other reasons men are reducing their restaurant visits. Maybe they’re more likely to shop online, and thus don’t make shopping-related convenience visits. Maybe more of these men are burdened with college loans and are just cutting back.

But price could be a big factor, particularly as grocery prices have remained relatively stable in recent years.

The real problem, Byrne said, is that these consumers have somewhere to go. While people aren’t cutting back on eating, they do have numerous convenience options, from prepared food offerings at grocers to new higher-quality frozen meal options.

“It’s a lot easier to put together something satisfying,” Byrne said. “You can feed more people at a better price point.”