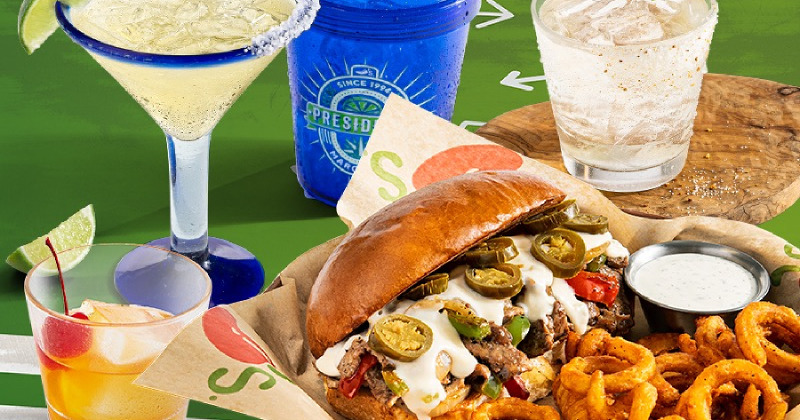 When football is on, happy hour is on, with a lineup of menu specials starting at $3 on the bar and lounge side of participating locations.

“We are Chili’s Grill & Bar, and we want to reinvigorate the bar with this expanded happy hour,” said CMO George Felix. “Tying it into football invites people to come back to the bar to watch. We also brought back our partnership with DirecTV and NFL Sunday Ticket and have lots of TVs and seating in the bar areas.”

The new bar menu focuses on simplification to keep it easier on the team and value to lure guests and build sales and traffic.

On the food side, there are 10 new bar bites, including nine wing variations served with a side of curly fries and house-made ranch. Three of the bone-in and boneless wing flavors—House BBQ, Buffalo and Honey Chipotle—are also on the regular menu. The other six, including Garlic Parmesan, Honey Sriracha and Mango Habanero are flavors developed for Chili’s virtual brand, It’s Just Wings.

“We don’t anticipate that wings will be a [price or supply] challenge again, and we’ve diversified the menu enough to guard against it,” said Felix.

Both the wings and curly fries are being offered in the bar for the first time. Customers can also order the fries separately, topped with white queso for $5 or loaded with queso, bacon and jalapenos for $1 extra.

A hearty Philly cheesesteak ($10) and downsized Burger Bites ($7) both come with a side of curly fries; wing baskets with fries run $7-$14 depending on size.

“All the ingredients were already in our kitchens, keeping complexity low,” said Felix.

Several new drinks have been added, including Chili’s Ranch Water, a cocktail that originated in Texas where the chain is headquartered. It’s a mix of tequila on the rocks with soda and a splash of lime.

“Ranch Water is taking Texas by storm and as the tequila experts, we want Chili’s to be the brand that introduces it to the rest of the U.S.,” said Felix. “It can be the next margarita.”

Chili’s knows margaritas. The drink has long been a brand signature, through Chili’s Margarita of the Month promotion and its signature Presidente Margarita. That one’s available for $9 on the new happy hour menu, along with several new $5 shots. 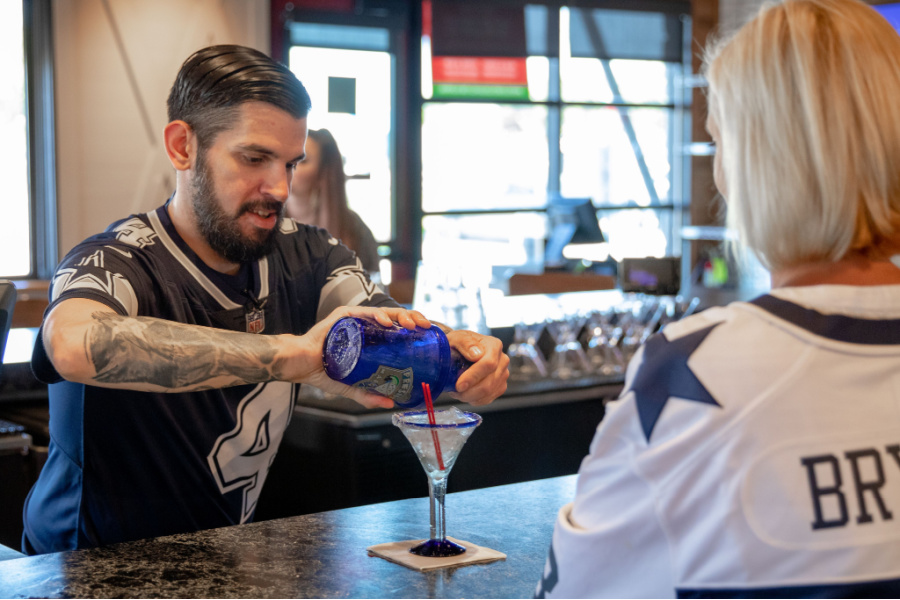 A Chili's bartender shakes up a Presidente Margarita for a happy hour football fan./Photo courtesy of Chili's Grill & Bar

“The PB&J shot is on the front end of the spirits trend,” Felix said. It’s a combo of peanut butter whiskey and black raspberry liqueur. Also on the roster is a Lemon Drop Shot made with lemon vodka and a Green Tea Shot shaken with Irish whiskey, peach schnapps and lemon sour.

“The shots are a fun enhancement that we haven’t had before,” he said. The peanut butter whiskey also accompanies the Grown-Up Molten, the only dessert on the menu. It’s a pairing of molten chocolate cake with a sidecar of the whiskey.

There’s also a secret side of the drinks menu for those in the know. Included are Modelo beer topped with frozen margarita and a Michelada that teams up Modelo with bloody mary mix, lime juice and a Southwest Cajun rim. Unadorned beers start at $3.

The happy hour menu runs all day on Saturdays and Sundays, as well as Thursday and Monday nights. For Monday night games, the chain partnered with DraftKings to attract fantasy football fans.

A couple of weeks in, Felix and the Chili’s team have gotten great feedback from guests and a slow build of traffic.

“Football brings in a great mix of happy hour customers. All ages, and some of the new drinks appeal especially to women,” he said.