Perhaps it’s due to rising beef prices, a craving for comfort classics or the Southern-food trend, but fried chicken is getting serious attention in every segment. PDQ, a QSR known for its fried chicken tenders, made it to the top spot on our Future 50 list of the fastest-growing small chains. On the upper end, chefs are elevating fried chicken with skilled preparations—and charging more for their efforts. 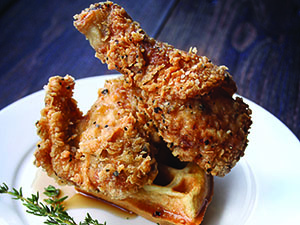 John Rivers started in the restaurant business in 2009 with 4 Rivers Smokehouse, a barbecue place based in Florida, now numbering six units. “To cook the food I grew up eating,” Rivers opened The COOP this spring in Winter Park, Fla. The 146-seat fast casual is decorated like grandma’s house, he says, but it took some work to replicate  grandma’s fried chicken.

“I underestimated the intricacies of making fried chicken for 500 people,” he says. Rivers first tinkered with the brine. Pure buttermilk turned the coating too dark, so he mixed it with water and herbs to get the color and flavor right. Rivers also played around with the oil, temperature and holding equipment. “Even if the chicken comes out perfect, most hot boxes use moisture, which works against crispness,” he says. He finally found a hot box made to hold fried chicken.

At Corners Tavern in Walnut Creek, Calif., Executive Chef Gavin Schmidt runs $30 Weeknight Suppers; Mondays are fried-chicken nights. He sells 25 to 30 orders of the three-course meal. “It’s cost effective compared to other proteins, even if you source special birds,” he says.

Schmidt starts with local pastured chickens, then brines them in a salt-sugar solution, followed by a buttermilk soak. He coats the pieces in a batter made with rye and rice flour, cornstarch and spices. “My cooking technique is my personal stamp,” he says. “I ‘par-fry’ the chicken for six minutes at 315 degrees, then per order, fry it for six minutes more at 325.”

Frying in high-grade leaf lard is one of the secrets to Paul Fehribach’s “fine-dining” fried chicken at Big Jones in Chicago, where he is executive chef and co-owner. Fehribach saves ham and bacon drippings to add to the lard, along with a bit of clarified butter, for his perfect frying medium.

Two more secrets Fehribach shares: He adds vinegar to his salt- water brine to tenderize the meat and a little cornmeal to the flour dredge for extra crunch. This attention to detail moves 300 orders of fried chicken a week at $21 a pop. Fehribach also has a secret to controlling protein costs. “I buy directly from a couple of Midwest farms, so even though the commodity market for meat has gone crazy, local prices haven’t gone up as much,” he says.