Although sandwich consumption is high—people eat more than three per week, reports Chicago research firm Technomic—there’s a lot more competition in the quick-service and fast-casual sandwich segment. “In order for sandwich operators to drive traffic and steal [market] share … they have to give guests a more interesting range of toppings, breads and proteins,” says Technomic Executive Vice President, Darren Tristano. 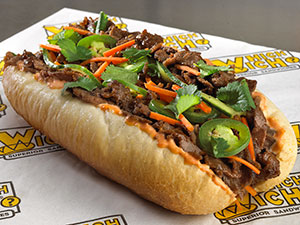 Technomic’s 2014 Sandwich Consumer Trend Report reveals that Asian influences are proliferating for sandwiches, fueled perhaps, as one operator suggests, by food trucks. Options such as Vietnamese banh mi, Chinese bao and builds on Indian naan are trending on menus. Younger consumers, in particular, indicate interest in Korean- and Vietnamese-style sandwiches, says the report.

Banh mi goes mainstream. Yum! Brands jumped on the Asian sandwich trend in September with the Dallas opening of Banh Shop, a Vietnamese-inspired fast casual that sells banh mi sandwiches. A second unit is slated for DFW airport. Another Dallas-based concept, Which Wich, introduced banh mi in an LTO at its 310 locations in August. “Our customers are telling us they want more adventurous flavors, including Asian,” says Evan Brody, senior director of marketing for Which Wich. “Food trucks may have spawned this interest.”

Which Wich prefers to expose guests to new flavors and ingredients through its Bag 8 selection—a monthly special. The Banh Mi Sandwich, August’s Bag 8, featured pulled pork in an Asian-style sauce layered on a French baguette with Sriracha mayo, cucumber and carrot strips, fresh jalapeños and cilantro ($7.50).  “We tried 15 builds to come up with the final item,” says Brody. “The sandwich needed to have broad appeal; not too exotic yet authentic.”

Nailing the Asian sauce took some time. The goal was to make it a sweeter component to balance the spicy Sriracha and jalapeños. “Our priority was to go to the source to taste real Asian versions, but distribution was a challenge,” says Brody. “We eventually partnered with an overseas supplier to source and distribute the sauce. Customers were excited that they could get an authentic-tasting banh mi outside of a big city.”

Emerging platforms. To capture both lunch and snack business, Bee & Tea in Chicago offers small Asian sandwiches known as Taiwanese buns ($1.99 each or three for $4.99). Spongy Chinese bao bread is the carrier of choice at this new fast casual from Forever Brands, which also franchises Forever Yogurt stores. Bao bread is typically used to enclose a meat filling in a sealed bun, says founder Mandy Calara, but Taiwanese buns are open face and offer more flexibility. “The format lets us customize fillings and add fresh condiments,” he says.

Bee & Tea currently menus six Taiwanese bun variations; Asian-style barbecued pork, chicken teriyaki, salt-and-pepper tofu and Indian-inspired butter chicken are rooted in Asian cuisine, but a couple of fusion varieties are on the menu, too. These include a spicy beef chorizo and a mushroom-quinoa bun. In development are half a dozen more selections that use ingredients such as seafood, sweet potatoes and peanut butter.

The sandwiches complement the other half of Bee & Tea’s menu—a wide choice of Asian bubble teas and hot and iced teas—making the place popular for guests on a morning or afternoon break. “We’re also exploring breakfast sandwiches to attract people earlier in the day,” Calara says.

Indian rising. The Aggarwal family runs eight sit-down Indian restaurants in the New York City area, but second-generation Rohan Aggarwal was keen on starting a fast-casual spot geared to the lunch rush. “Roomali rolls are a common Delhi street food. I always craved them, but they weren’t available here,” he says. So he opened Baluchi’s Fresh this fall, marketing  these Indian wrap sandwiches and other grab-and-go items.

The wraps are formed using very thin roomal bread. “Roomal means ‘handkerchief’ in India; it’s our version of a tortilla,” says Aggarwal. The dough is made the night before, then portioned out and cooked quickly, much like a crepe, on an upside-down cast-iron pan. To order, the roomal are wrapped around fillings such as chicken tikka masala and lamb seekh  along with sauteed onions and peppers; masala fries are served on the side. Guests can customize their rolls with housemade chutneys and condiments; average check is $11.

“My goal is to open up American palates by offering  unique flavors and formats,” says Aggarwal. “And to grow Baluchi’s Fresh into a multiunit concept.”