If you were to land on the floor of the sprawling National Restaurant Association Show from a distant galaxy, you might think the inhabitants of this planet do not consume animal protein.

In every corner of the Show, which runs through Tuesday at McCormick Place in Chicago, there are plant-based versions of burgers, ice cream, shredded beef, sausage, shrimp, tuna poke and even a perfectly runny egg.

John Li, VP of culinary innovation at Wendy’s, said during a session at the Show that he’s been amazed by the growth of plant-based foods over the past decade, and that he can’t imagine what the next decade will bring.

It does lead one to wonder whether we’ve yet reached peak plant-based foods. With so many choices, and so many products within individual categories, it seems a shakeout is likely on the horizon with some of the smaller brands getting gobbled up by bigger producers.

In the meantime, though, we are left with many, many options.

Some of the Restaurant Business team spent Sunday strolling the Show’s many aisles, sampling the vast assortment of plant-based offerings. We likely missed lots of things. And our stomach real estate was depleted before we could try everything that looked enticing.

But here’s a very unscientific rundown of some of our favorite vegan offerings from suppliers big and small. 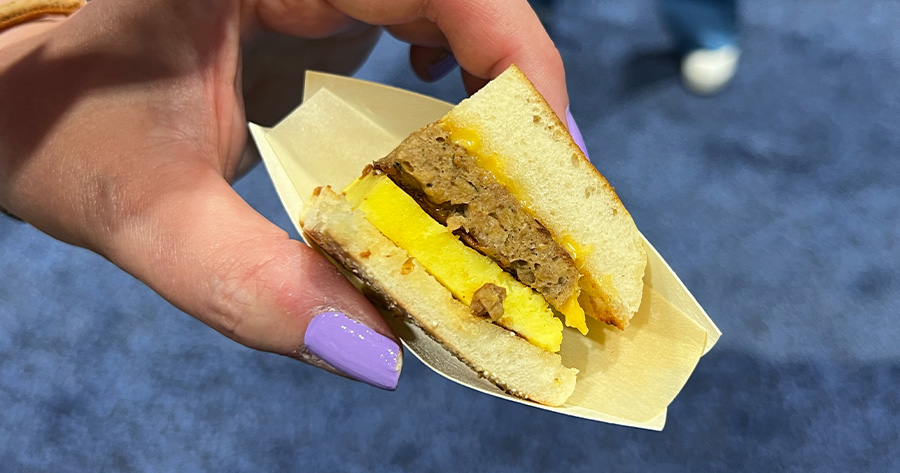 Major player Beyond Meat excels at plant-based sausage. So, this all-veggie breakfast sandwich made with a nicely spiced sausage patty, egg and cheese represented a good range of textures and flavors that was remarkably similar to the meat-based classic. 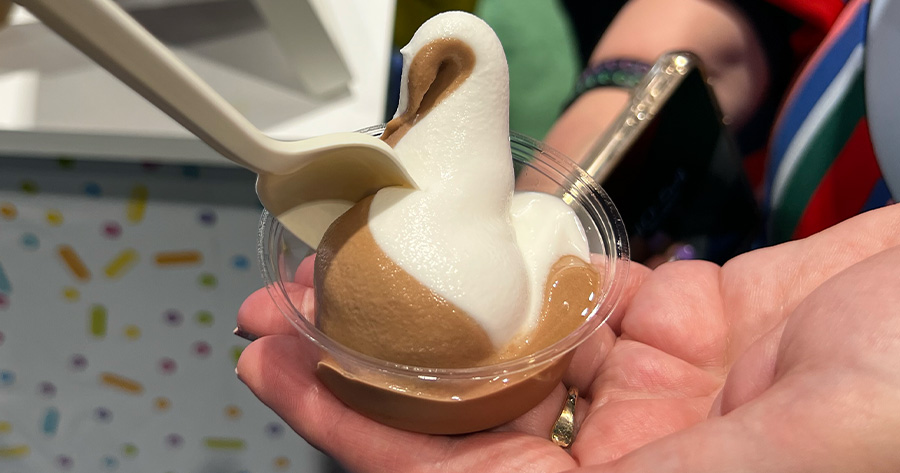 Temptation’s oat-based soft serve (we tried the chocolate-vanilla twist variety) is decadent and creamy and hard to believe it’s vegan and fat-free. We were especially impressed with its texture and were tempted to go back for more. 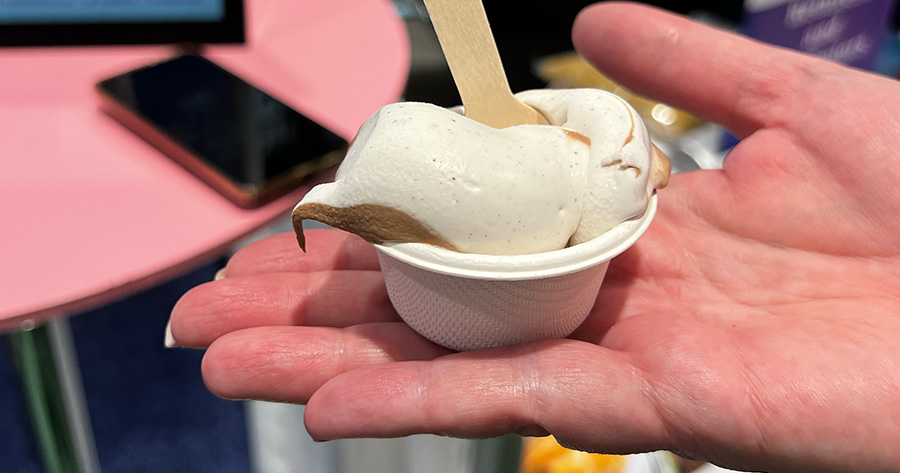 We had to try Nada Moo’s soft serve, to compare it with Temptation’s version. Instead of oats, this one is made with a coconut milk base, sweetened with agave nectar. The soft serve was also very creamy, but with a slight coconut undertone. 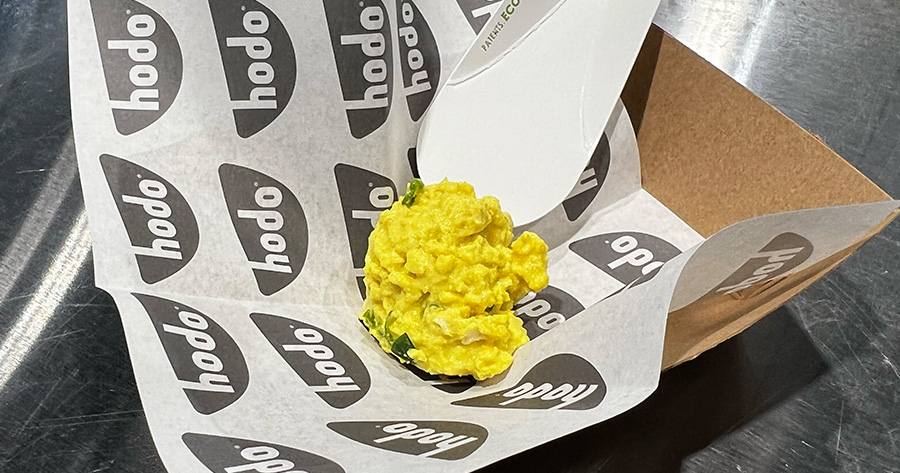 Hodo Foods is the producer behind the vegetarian Sofritas at Chipotle Mexican Grill. At the show, the company demoed its newest product: All-Day Egg Scramble. This ready-to-eat tofu-based item lent a toothsome bite to a curried vegan egg salad. 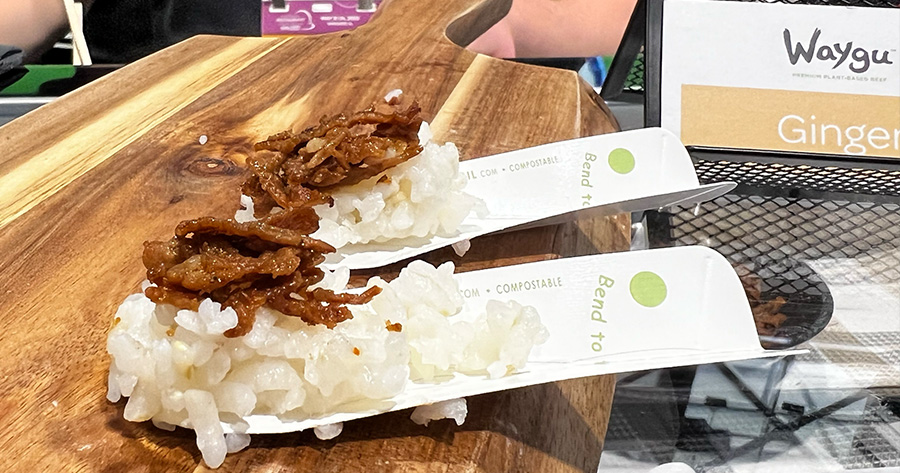 Wamame Foods is out with Waygu, a plant-based alternative to high-end Wagyu beef. The product, which is sold in several different flavors, comes in thin strips that can be fried and shredded much like real beef. We liked the melt-in-your mouth texture of Waygu’s ginger beef, very thinly sliced and served over rice. 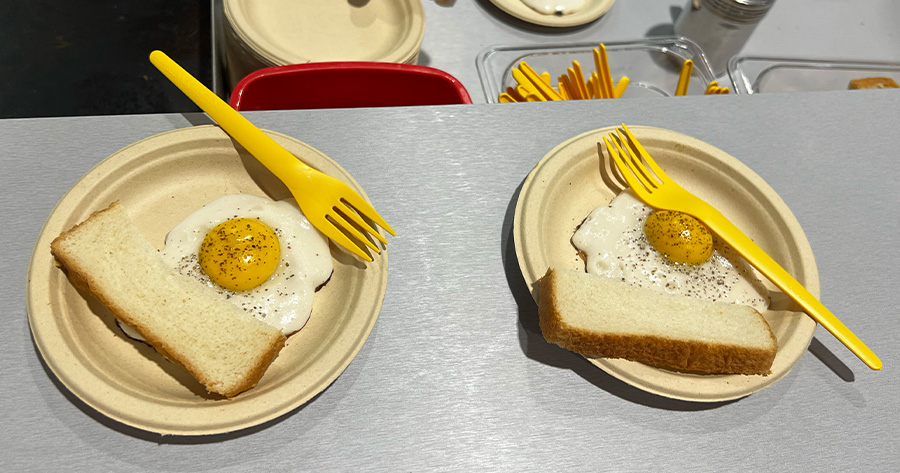 Yo! sunny side up egg

It’s hard to fathom a runny, plant-based egg yolk, but that’s what the team from Israel-based Yo! has come up with to compete in the fast-growing plant-based egg segment. At the Show, chefs griddled up Yo!’s sunnyside-up eggs by first extruding a circle of egg white and topping it with a perfectly shaped yellow yolk. The result drew plenty of wows from passersby and was a fine accompaniment with a toast point. 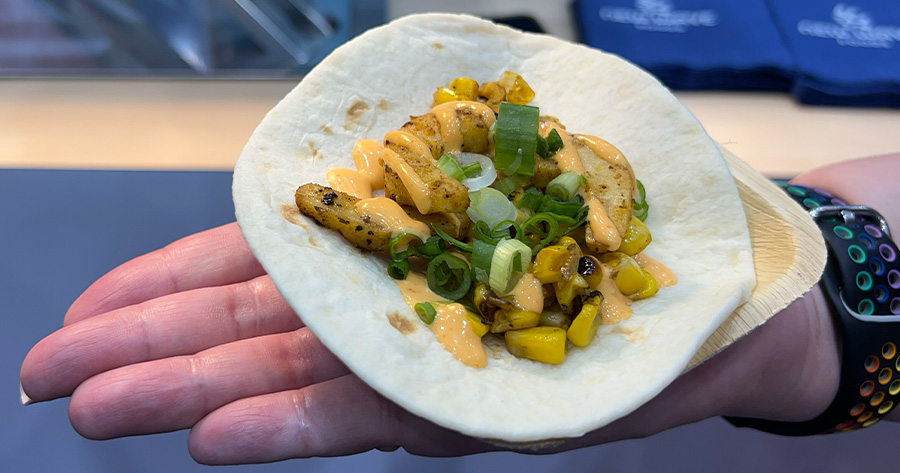 Seaweed, mung beans and other ingredients make up the delicious plant-based shrimp from New Wave Foods. We tried both the fried and sauteed offerings and found them to be close approximations of the real deal, adaptable to a wide variety of cuisines and dishes. 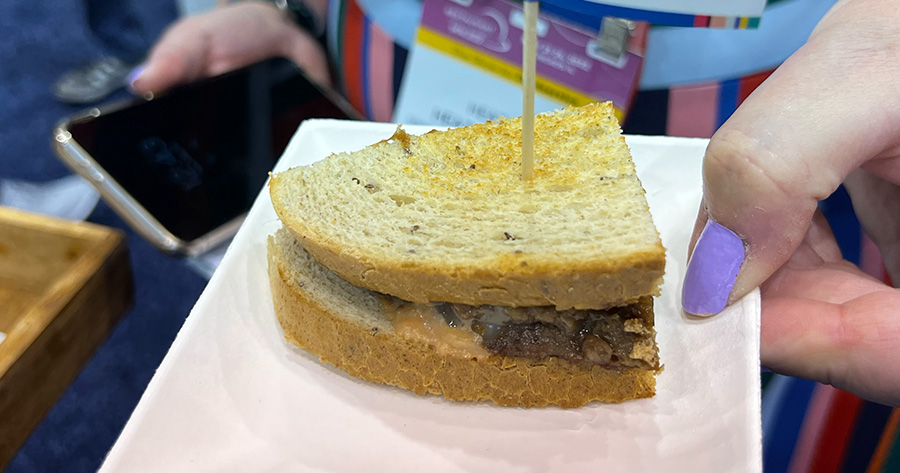 Like Beyond Meat, Impossible Foods is one of the OGs of the meat analogue space. The company’s burger patties, ground burger, sausage and now, chicken nuggets are found in a variety of restaurant and retail locations. There’s little wonder why Impossible’s products have found such mainstream success with both omnivores and vegetarians alike: They’re meaty and flavorful and adaptable to many different dishes, such as the comforting patty melt the brand served at the Show Sunday.