Nate Weir, director of culinary operations at Denver-based Modmarket, was on a mission: to create a better pizza—not just better than the growing number of customizable fast-casual concepts, he says, but better than the Neapolitan pies tossed at high-end pizzerias. He wanted it to be both more healthful and more artisanal in appearance. “What was missing from our recipe was a top-shelf dough,” Weir concluded. “We were rushing the process.” The new dough blends stone-ground, whole-wheat flour with unbleached flour to boost nutrition. Weir now allows the dough to ferment overnight to develop structure and more complex flavor. It takes more time, but not more people, he says; the kitchen staff assumes some pizza-making tasks. That’s allowed the price to remain the same at Modmarket’s 10 locations: $8.50 to $9 for a whole pie; $5.50 for a half. 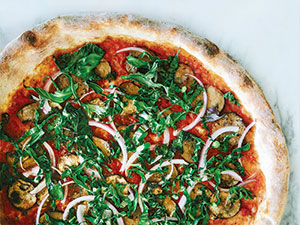 “Visually, the crust gets a beautiful color and char during baking and has a more pronounced ‘cornicione’—the puffy outer rim of the pizza,” says Weir.

Modmarket’s dough starts with six ingredients—the flour blend, water, sea salt, yeast, extra virgin olive oil and a touch of agave. It rests overnight and then goes through a multihour folding and rising process. This not only bakes up a better crust, it’s easier to stretch, says Weir. Modmarket’s eight options, including this vegan Crimini Kale Pizza, haven’t changed, but comments on social media suggest that guests have noticed the improved quality.