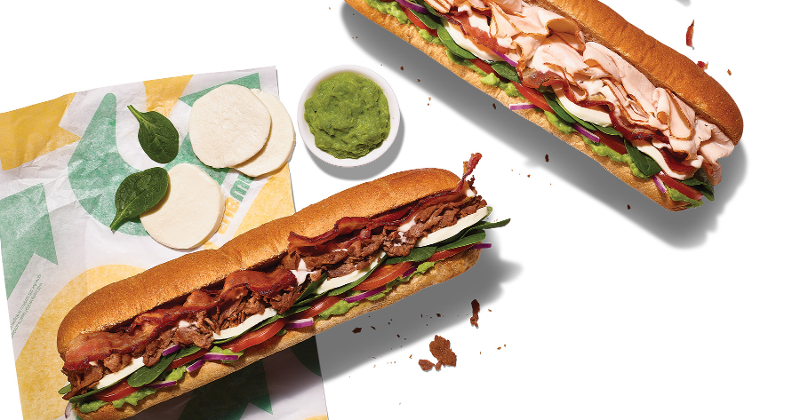 Subway had been working on a menu overhaul for two years when its new platform, “Eat Fresh Refresh,” launched last July. It all began with the bread.

“We worked with Nancy Silverton [award-winning restaurateur and baker] on two new formulations, modified the recipe and made some operational improvements, too,” said Paul Fabre, senior vice president of culinary & innovation at Subway.

The bread was the starting point for a complete menu upgrade, product by product, evaluating every item that could be improved throughout the core menu. By the time Eat Fresh Refresh made its debut, Subway had added 11 new ingredients to its pantry, including vinaigrettes, premium Italian cold cuts, Angus beef, fresh mozzarella, rotisserie chicken and fresh avocados.

“We looked at ingredients that would have the greatest impact,” said Fabre.

That impact seems to be working. In a survey of 66,000 guests, 83% reported that they are fans of the menu upgrades. Guest indexes shot up, with satisfaction scores increasing by 13 points and return visits rising 15 points, said Fabre. Guest satisfaction is often considered a leading indicator of improving sales.

But profitability and sales have not yet caught up to pre-pandemic levels, as Subway closed about 1,000 units in 2021, cutting the system count by 5%. In Technomic’s 2022 ranking of the Top 500 chains, the sandwich QSR came in at No. 8. It was the second-largest chain as recently as 2012 and was the third-largest in 2017. The chain's decline on the ranking came entirely from franchisees closing stores after years of sales weakness.

The journey toward craveability

Since the launch of Eat Fresh Refresh, every customer who walks into a Subway location is greeted by the aroma of baking bread, made fresh daily.

“We added more fermented notes to our artisan Italian bread to create a more authentic aroma, and our multi-grain bread is baked with three seeds and three different grains,” said Fabre. “We also score the loaves in house for a better visual—a technique we brought back.”

Subway uses the same ovens it always has, but bakes the bread longer at a higher temperature, plus extends the proofing time of the dough. These steps achieve a crisper crust, Fabre said.

Bread is the “hero” of the Eat Fresh Refresh campaign, he added. He and his team drew inspiration from the bread experience and other elevated ingredients to further build a craveable sandwich platform.

The Turkey Cali Fresh is the signature sub of the platform, according to Fabre. It features the new fresh mozzarella, layered with avocado, roast turkey, bacon, fresh spinach and mayo on the Hearty Multi-Grain bread. The Steak Cali Fresh substitutes premium shaved steak for the turkey.

The very popular Chicken Bacon Ranch was amped up with rotisserie chicken and peppercorn ranch, swapped in for run-of-the mill ranch dressing.  The updated ranch is a creamy blend of buttermilk, black pepper, garlic, onion and herbs.

With condiments key to creating a craveable, flavor-packed sandwich, Fabre also brought in a new vinaigrette. He and his team worked with a supplier to create a fresh take on the classic oil-and-vinegar blend, using red and black pepper to brighten the flavor. “The MVP vinaigrette goes great on our Italian-style subs,” he said.

Italian is the theme of two of the new builds. “We had been seeing a lot of capicola on the market, so we went with it, layering it with Genoa salami, Black Forest ham and pepperoni—ingredients already on hand—on the new Italian bread,” said Fabre. “It’s the first time we put four meats on one sandwich.” Subway calls it the Supreme Meats sub; it also includes provolone, banana peppers, red onions, lettuce and tomato, all drizzled with MVP vinaigrette.

Fabre and his team are constantly evaluating the ingredients in Subway’s pantry to avoid adding a lot of new SKUs. “We thought about adding pesto but the timing was not right. I liked it from a culinary perspective, but it didn’t fit with any of our sandwiches,” he said.

He also simplified the supply chain, taking regional products out of the pipeline for consistency across the system. “We’re also mindful of what we’re adding and eliminating, and so far, there have been no net adds or subtractions,” Fabre said.

Fabre also created a new version of Jimmy G’s sub, a popular sandwich from Subway’s Vault. He updated it with the new mustard roasted rotisserie chicken, layering it with pepperoni.

Subway has partnered with sports stars to promote some of the brand-new Vault sandwiches as their favorites—a campaign that will continue.

“I am focusing on building on our core rather than developing LTOs,” he said. “These are items that customers will come back for.”

Going forward, Fabre will continue to introduce new signature builds. And later this year, customers can expect to see the next phase of Eat Fresh Refresh hit the menu.

“We’re working much further ahead in R&D, already planning 2023 and developing items for multiple years,” he said.

But in the end, it’s the Subway customer who steers menu development.

“We’re always doing research to make sure our menu is aligned with our North Star and fits what our guests want. Our consumers want food that’s craveable, flavorful and affordable,” Fabre said.