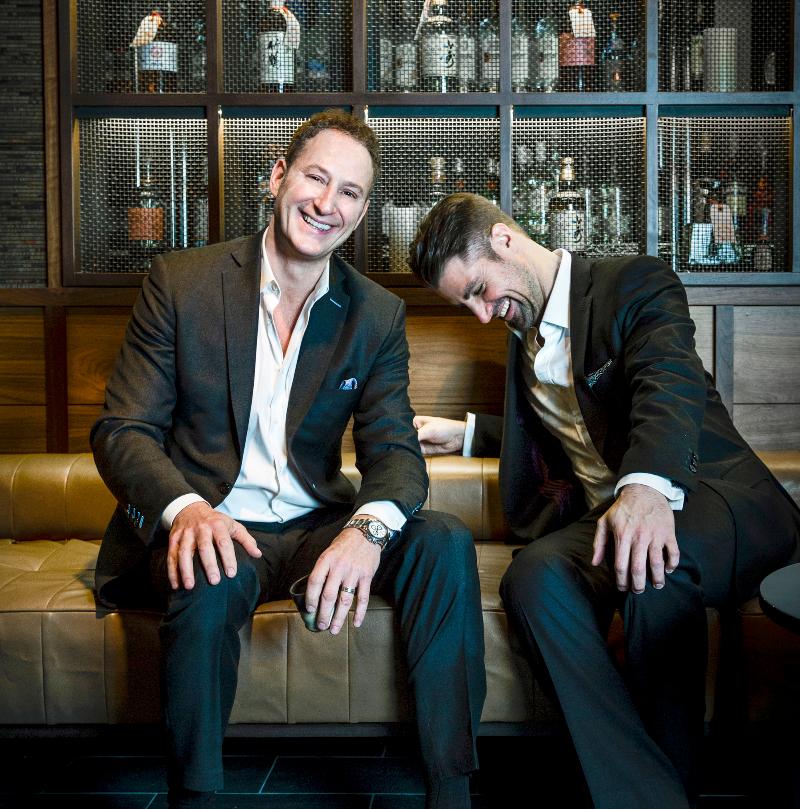 Kevin Boehm and Rob Katz, founders of Chicago’s multiconcept and multi-award-winning Boka Restaurant Group, remember the precise moment of their company’s breaking point, the instant that would serve as a line of demarcation between the organization’s past and its future.

It was 2012, on a construction site for what would become “Top Chef”-winner Stephanie Izard’s acclaimed Little Goat restaurant. Balena, the group’s sophisticated Italian spot, was about to open, marking seven new restaurants for the two-person leadership team in two years. Two GMs had just quit. The to-do lists were unconquerable. They hardly saw their wives and kids. Both were feeling depressed and run-down.

And Boehm and Katz stood on the construction site, staring at a cooler, unsure which restaurant it was for. “What type of circus must be happening for us not to know which cooler?” Katz said. He grabbed Boehm by the shoulders and said, “What the hell are we doing right now? This is lunacy.”

“That’s when the lightbulb went off,” Boehm says. “That was the dawning of the new Boka Group.”

In the years since, Boka has crafted the foundation necessary to fuel its growth and make it one of the country’s most successful and well-respected restaurant groups, known for its partnerships with leading chefs like Izard and Lee Wolen, its robust suite of benefits for its nearly 2,000 employees and its classic sense of design and hospitality.

Years before Boka Group was even an inkling, 10-year-old Kevin Boehm informed his parents that he planned on opening a restaurant. At 22, he did just that with the Lazy Daze Cafe in Seaside, Fla. He’d go on to open several more before a fateful “blind date” coffee meeting with Katz, an options trader who had launched some notable bars and nightclubs and was interested in starting a restaurant.

Mutual friends suggested the two have coffee, a planned 20-minute conversation that stretched to three hours and sparked the October 2003 birth of Boka, the pair’s first joint endeavor. (The restaurant’s name, naturally, comes from the first two letters of each man’s surname.)

“We just found that we really clicked,” Katz says. “We just had similar ambitions. We were very similar in many ways. It did not take long to come up with the fact that we should at least try one restaurant. We were just far too aligned.”

It took nearly 18 months to debut Boka after several real estate deals fell through. “The coffee was much smoother than the process of opening,” Katz jokes.

Infrastructure. It’s the key to Boka Restaurant Group’s success. And it’s the essential piece that was missing during those days leading up to the cooler incident, when Katz and Boehm were scooping up inexpensive recession-era real estate with little regard to the toll such rapid expansion would take.

For a year and a half after that moment, Boka Restaurant Group opened just one restaurant.

“We really put the brakes on growth until we could figure out a way to build the infrastructure, a team,” Katz says. “Before that, we hoarded information and we tried to do it the hard way, to do it ourselves. It was a game-changer and a life-changer.”

"If you don't evolve, you'll get blown away by this business." —ROB KATZ, CO-FOUNDER

So the two restaurateurs began creating a staff, finding people to promote from within and looking for talented people with little to no restaurant experience for other essential posts. They created teams, with directors responsible for certain restaurants.

“You start looking at talent in a different way,” Boehm says. Who could tackle human resources? Who’s best for accounting? Marketing? Restaurant liaisons?

In 2003, Ian Goldberg was a 24-year-old bartender at Boka. Today, he’s the VP for Boka Restaurant Group, overseeing operations for the company’s 19 concepts, and a prime example of how the company grooms employees for professional growth.

“From where we started to where we are now, it literally gives me goosebumps,” Goldberg says.

Goldberg worked his way up to bar manager by the time Boka opened its second restaurant. After years of hands-on learning about the industry and continued advancement, he became an equity partner in several Boka concepts in 2011. He now has a profit-sharing relationship with eight restaurants.

He’s also responsible for seeking out employees that share the characteristics he had when he began with the company. He looks for people with a “high likability,” he says, coupled with a positive attitude, responsibility, follow through, ability to receive constructive criticism and a willingness to find solutions.

Katz and Boehm currently have six chef partners. And they’re methodical about selecting them. There are tastings and get-acquainted dinners and calls with virtually everyone who has ever worked with the chefs. “We’ve done too many tastings to even count,” Katz says.

Some must-haves to be a Boka chef-partner: “Are they incredibly talented?” Katz says. “Do we like them? Are they leaders? Do they have a fiscal sense about them in the work they do? … We are purposely deliberate about that process. It’s a big deal because they are truly our partners.”

Lee Wolen, Boka restaurant’s chef since 2014, was working in the kitchen at Eleven Madison Park when he first met Boehm and Katz. He took their business card and made plans to keep in touch if he moved to Chicago.

"The best reason to grow is so you can create opportunities for people." —KEVIN BOEHM, CO-FOUNDER

Boka didn’t have any immediate openings when Wolen landed in Chicago, so he took a chef’s job at the Peninsula Hotel. Boehm and Katz ate dinner there several times. After then-Boka chef Giuseppe Tentori left to open his GT Fish & Oyster under the Boka Group’s umbrella, Wolen took the helm.

“I just really clicked with them,” Wolen says. “I get along very well with them. I like the concept of being part of a group, due to the infrastructure.”

Chef-partner Chris Pandel met Katz and Boehm in 2010, while he was chef at The Bristol, a contemporary American restaurant in Chicago. The Boka team had eaten at the restaurant several times, and when they ran into Pandel at an industry event in 2010, they mentioned having a storefront they wanted to turn into an Italian spot. “Within about two days of talking about it, we started on Balena,” Pandel says. Balena, which suffered a fire in 2017, officially shuttered late last year. Pandel, though, has gone on to open several other Boka concepts.

“The infrastructure that’s been developed since I started with them has been massive,” he says. “There’s so many layers now that didn’t exist before. You can reach out to someone to help you with digital marketing or graphic design. There’s just layers of things, just these really incredible, developed practices that allow you to do your job.”

With more layers of corporate structure, of course, comes more people. And with more people comes the need to create and define a company’s culture. At Boka, that culture includes a free-flowing pipeline for growth within the organization, benefits for all employees and an assortment of team-building initiatives.

“Part of the reason I’m working with and for this company is directly correlated to [Boka’s culture],” Pandel says. “There’s a lot of people that have been with me seven, eight, nine, 10 years. It’s my responsibility to provide them with a career. Through the growth of Boka, I’ve been able to do that. That’s one of the most valuable things you can offer anybody in the restaurant business, is the opportunity for growth.”

In fact, there’s a systematic employee review process to aid with moving workers along their chosen career paths.

Boka also offers benefits that are often unheard of in the restaurant industry, especially for independent concepts. The company recently added a 401(k) program. They are self-insured, with health coverage for all full-time employees after 90 days, including six mental health visits a year. Workers receive stipends to dine at all Boka restaurants. There’s also maternity and paternity leave and flexible scheduling.

In addition to benefits, a positive team environment matters to Boka leadership, too. Each summer, Boka hosts a companywide softball tournament, and there are regular team-building outings, all with the goals of building mutual respect, creating cohesiveness and, of course, reducing turnover.

After the 18 months during which Katz and Boehm decided to slow down and regroup, the Boka team went on to open eight restaurants in three years. It was harried and hectic. But, with corporate infrastructure in place, much more manageable.

The phenomenal success of 2010’s Girl & the Goat, headed by Izard, led to further Boka development in Chicago’s now-bustling West Loop dining area. (Girl & the Goat ranked No. 91 on RB’s2019 Top 100 Independents ranking.) “Something magical happened when we opened Girl & the Goat,” Katz says. “We were off on the pro forma by 3,000%. It was so crazy, so busy.”

Each of Boka’s concepts is a one-off. The group has been approached about opening multiple units in other cities, but has turned down every offer. “That’s the artistry piece of it,” Boehm says. “We have several concepts that could’ve been repeated. At the end of the day, we have a limited amount of time in life to do the projects we want.”

"It always starts with an idea," Boka Restaurant Group co-founder Kevin Boehm says. "That idea could be a chef or a concept or a location. ... Inspiration comes in a million places. It could be from a Wes Anderson film. Once we become serious about it, it's working that critical path that we use for opening restaurants. It's like the 835 things you do to open a restaurant. The first 40 or 50 things on that critical path are just Rob [Katz] and I. ... It really is about the details in this business."

Cabra. Peruvian, with ceviche bar and a rooftop lounge.

Cira. Mediterranean, serving all dayparts at The Hoxton hotel.

The J. Parker. Bar with concise food menu atop the Hotel Lincoln.

Little Goat. A diner, bakery and coffee shop with a rooftop and area for cooking classes.

Somerset. Breakfast, lunch and dinner concept at the Viceroy hotel, modeled after a country club.