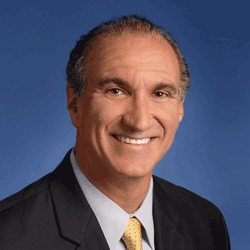 Silva will take over the 792-unit chain at the end of March. He spent 13 years as CEO of Checkers & Rally’s, a largely drive-thru focused chain.

He takes over for what has quietly been a successful fast-food chain in Culver’s, whose system sales rose 14% in 2019 and likely benefited from a pandemic that emphasized drive-thru service.

In a release, the company credited Silva for building a “family-serving-family culture” at Checkers, saying that he built unit-level operating margin by more than 300 basis points.

“As we searched for Culver’s next leader, we were looking for several key characteristics—a true culture and values fit, the ability to support and expand the successful growth of our current and future franchisees and a drive to genuinely deliver on Culver’s mission,” co-founder Craig Culver said. “We are confident that Rick can do all three and are excited to see what he brings to further accelerate Culver’s.”

Koss retired late last year after 23 years with the chain.

Silvia will become only the fourth CEO in Culver’s history. Culver had been its longtime CEO before he retired in 2015, after which he was replaced by Phil Keiser, who died of a heart attack in 2016. Koss took over in 2017.