Over dinner one night with founder Ron Shaich and a small group of Panera Bread franchisees, Paul Saber was last in the group to field questions from Shaich about what else the company should be doing and what his concerns were. Saber, who joined Panera in 2003 after a 17-year run at McDonald’s as a franchisee and senior corporate leader, posed a question that ultimately led to Panera Cares, the company’s groundbreaking pay-what-you-can business model designed to “share the warmth” with those less fortunate. 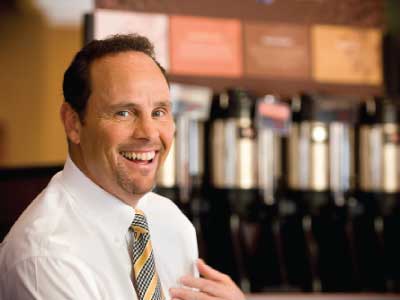 “I replied that what was keeping me up at night was the fact that we’ve been enormously blessed at Panera. We’ve seen great success both individually and corporately. At the franchisee level, we’ve always given back to our communities and the culture of giving back drew many of us to the company. But what I asked Ron that night was ‘What’s our Ronald McDonald House? What are we doing corporately that people can immediately identify as something that goes well beyond the serving of our products?’ I didn’t have a vision for Panera Cares, I just asked the question. I believe the idea was planted in Ron’s heart long ago, that God breathed in him and the vision took shape through a lot of dialog and conversation.”

Saber, who outside of his restaurant business is active in Christian ministries worldwide, says initiatives such as Panera Cares embody the type of Conscious Capitalism that drives his own approach to business. On the “capitalism” side of that equation, he’s had unqualified success. Starting in 2003 with an agreement to build 15 stores in San Diego, he now has 56 in southern California and Michigan and foresees growing to 75. But he’s even more passionate about the “conscious” side.

He’s built a corporate culture based on one simple premise: treat others as you would like to be treated. “If you’re deliberate in that with every new hire and keep repeating it in every manager’s meeting, every sit-down with any associate, if that’s the premise by which you begin every conversation then it permeates the culture...We talk a lot about looking for opportunities to demonstrate an attitude of care that [customers] don’t expect, whether it’s an extra smile, a warm cookie, recognizing them by name, or coming together to support someone in need.”

Early on, Saber developed a training department to help instill that corporate culture and keep it strong as the company grows. He stresses extreme care in hiring and bringing the right people into the “family.” His general managers function as owner-operators who bring the culture to life at the street level. The company supports charitable causes ranging from cancer research to feeding the homeless to domestic abuse, and GMs are encouraged to select and support causes in local communities. All managers are charged with buying someone a meal every shift just to thank them. A fund is maintained into which the company and associates contribute on a volunteer basis to help support fellow employees going through tough times.