Lippert’s stated mission is to accelerate the growth of Willie’s, a casual-dining concept, and its full-service sister concept within the Willie’s Restaurants fold, two-store Fajita Willie’s Cafe & Cantina. 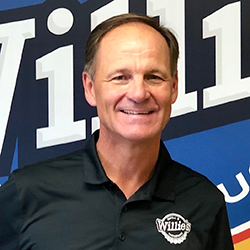 Willie’s Grill is patterned after a Texas icehouse, a spot where locals gather to drink beer, munch street foods and hopefully catch a breeze. Its menu ranges from half-pound burgers to chicken-fried steak, po’boys and shrimp. It also features beer, wine, margaritas and other alcoholic beverages.

All of its units are currently located in Texas, most around Houston and San Antonio. The company was started in 1982.

Red Robin’s turnaround finds a tailwind in the pandemic

Restaurant menus slim down to maximize efficiency and boost margins

Ark Restaurants faces continued uncertainty as the pandemic rages on