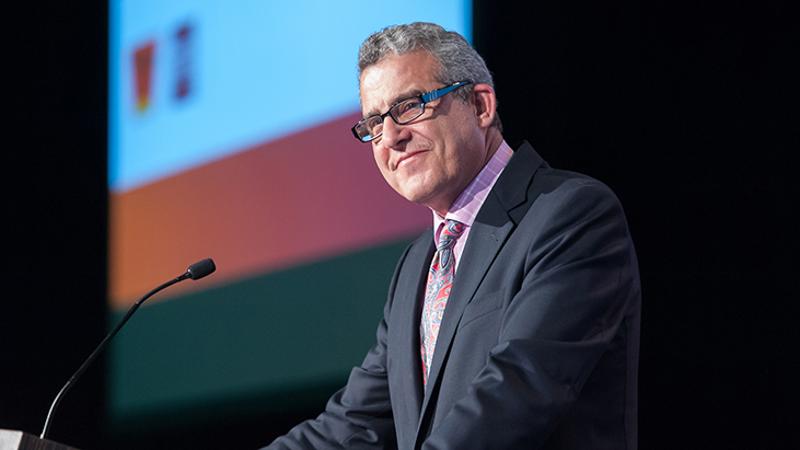 Hazem Ouf doesn’t profess to have all the answers for reviving restaurant organizations, even after snatching the likes of Village Inn, Max & Erma’s and O’Charley’s from the ICU. Rather, it’s the questions that drive the success of American Blue Ribbon Holdings, and that characterize Ouf’s style as president and CEO.

Even servers saw that style after ABRH purchased O’Charley’s and sister brands, Ninety Nine and Stoney River Legendary  Steaks, in 2012—doubling the company’s size. Ouf stepped in as acting president, kicking off the rejuvenation by posing a two-parter: What is O’Charley’s? What does it stand for?

“I remember asking the managers and servers, ‘Who are we?’ They couldn’t say,” Ouf recalls.

One of his self-assigned duties as CEO is clarifying that identity. “We examine our positioning statement, we talk to our guests, we talk to our team members, we look at our culinary, we look at our marketing, we make sure we have the right partners,” explains the 60-year-old. It’s a comprehensive process, but not necessarily a slow one.

When Ouf and his partners bought Village Inn and its family-dining sister, Bakers Square, in 2009, “the thing I remember the most was being asked to take a ride with him,” says Jeff Guido, then Village Inn’s president. “He asked me my thoughts on the brand, what was right and what was wrong, what I thought we should do.”

Bam! A strategy gelled. “To this day, that’s the blueprint for what we’re doing,” says Guido, now president of ABRH’s family-restaurant division. “You come into an existing management team, they’re used to a certain style of management and a certain pace,” says Ouf. “I changed the pace.”

Ouf acknowledges that speed and intensity are part of his fabric. He put guardrails on himself and ABRH by drafting a set of core values in 2009 and elevating them to near-religion status. Meetings start with a review of the code. Executives might be invited on stage at company events to talk about their favorite value. A third party is contracted every year to verify that the company is staying true to its stated tenets. “I want to make sure the management, the executives and all the layers of the organization share a common commitment,” says Ouf.

Stressing that he’s not above the code, Ouf recounts how he and a subordinate were having an icy disagreement over how to answer a particular question. “He looked at me and said, ‘Your solution is not part of our values, and therefore I know the answer to it.’ I no longer had to debate with this individual, because he was sticking to our values.”

The pillars include such commitments to good citizenship as a pledge to treat all associates with respect, but extend to harder-core business issues. For instance, “it really starts with taking accountability for our own results, to relentlessly look for ways to improve, to never be satisfied with the status quo,” Ouf says.

The culture, values and approach to turnarounds has yielded a scalable system for buying and rejuvenating restaurant brands, but Ouf is particular about potential candidates. “All of our concepts are super-regional brands that have great names but had lost their ways and were undercapitalized,” he says. “I have been an advocate and always been attracted to super-regional brands, because America is finding its roots culinarywise. Restaurants that have a coast-to-coast menu have a difficult time being relevant to every area of the county.”

Today, ABRH extends to five brands encompassing 700 restaurants in 42 states, with collective annual sales of $1.2 billion, according to Ouf. The workhorse is O’Charley’s, now defined as “serving classic American cuisine with a Southern twist,” which contributes 40 percent of the revenues.

O’Charley’s has just completed five consecutive quarters of positive sales gains, something that hasn’t happened within that brand since 2006, and Village Inn has logged its 26th consecutive positive quarter.

Ouf moved ABRH to O’Charley’s Tennessee headquarters because the acquisition brought with it an infrastructure capable of supporting the whole company. He notes with pride that not a single executive left the company because of the move, a fact that he reads as a clear buy-in.

That’s not to say there haven’t been personnel changes. “Do not let one person or a small group get in the way of our mission,” he says. “We lost a few executives because they didn’t believe in our values.”