Restaurateurs who view the business as a battlefield might’ve uttered an “amen” at the end of the presentation from retired Gen. Barry McCaffrey, who wound up this year’s conference with an analysis of leadership during wartime. 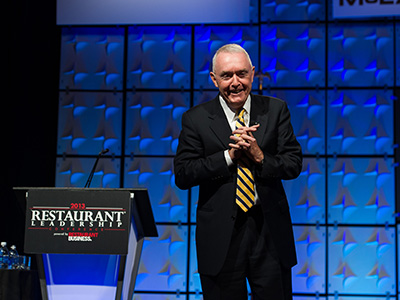 The highly decorated four-star general and first-ever federal drug czar shared what he’d learned about leadership during what he described as “four decades of running an organization under constant pressure.”

He defined three types of leadership:

McCaffrey spoke not only about how to exude leadership, but how to forge it in subordinates. Taking issue with the premise that today’s workers aren’t worth their salt, he advised audience members to take note of West Point’s guiding principle: Leaders are made, not born. “Recruit men and women of character,” McCaffrey said. “It’s nice if you are brilliant and attractive, but at the end of the day what you want is character.”

He also noted that not being afraid of hard work often means the difference between success and failure.

Echoing what a panel of military veterans—all of whom are involved in foodservice—asserted earlier in the day, McCaffrey said it’s no wonder that vets make great employees. In his view, they are persons of character, unafraid of hard work, problem solvers and have skills that translate into leadership off the field.

McCaffrey closed with the Top 10 lessons about leadership he’s learned in his storied career in public service:

McCaffrey knows a thing or two about leadership. Besides serving as commander in chief of the U.S. Armed Forces Southern Command and the 24th Infantry Division during Desert Storm, he had a storied government career, serving as assistant to General Colin Powell and becoming the inaugural U.S. drug czar under President George W. Bush. He now runs a consulting firm based in Arlington, Virginia, focused on helping organizations build leadership.