Which Wich Superior Sandwiches promoted a former franchisee to president, allowing the concept’s founder, Jeff Sinelli, to shift his day-to-day focus to his company’s other brands while the fast-casual sandwich chain gears up for expansion.

Cherry Hearn, who first worked with Which Wich as a trademark attorney 15 years ago and later went on to become a franchisee, is focusing on several initiatives at the 400-unit sandwich chain.

Chief among them is updating Which Wich’s food and beverage menu, including the systemwide addition of french fries in mid-July.

“The product mix is shifting more toward french fries and away from potato chips as a side selection, which is what we intended,” Hearn said. “It does raise the check.”

She is also working with the brand’s director of training to develop new training modules around customer service, with the hope of making consumers think of Which Wich as the Nordstrom of restaurant chains, she said.

“I really want to take our guest services training to the next level,” she said. “It’s going to be exciting to work on that. It’s the differentiator for a lot of brands. The thing you remember is how you felt when you went in.”

“We hung our hat for a lot of years on customization,” she said. “Build-your-own will always be part of the DNA at Which Wich. … People have become more accustomed to the one-click order process. We have to figure out a way to accommodate all those proclivities. Our fans have their favorites. Our new guests want more curated and prebuilt (options).” 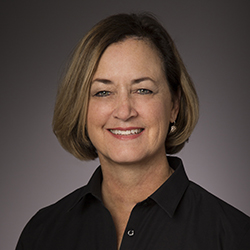 Hearn represented Which Wich in a trademark infringement case in 2005. A few months later, she signed on to become a franchisee, opening the system’s eighth store and two more locations after that. In 2012, she sold her stores and joined Which Wich’s corporate team as general counsel.

Which Wich had been without a president since August 2017, when former Corner Bakery Cafe executive Ric Scicchitano left the post. The chain had systemwide sales of $222 million last year, according to a Technomic estimate.

Hearn’s move into the role will allow Sinelli to concentrate on the expansion of 32-unit Paciugo Gelato Caffe, which he acquired in 2017, and a new concept, Supernova Coffee, slated to open its first unit next year at Which Wich corporate headquarters.

“Our nontraditional locations are growing—college campuses, convenience stores, hospitals, airports,” she said. “We can be flexible on menus and the real estate.”

Hearn’s previous experience as a franchisee gives her valuable insight when working with store owners as Which Wich’s president, she said.

“A lot of times, it’s the subtle things,” she said. “It’s just understanding the perspective of what it’s like to be in your store and the day-to-day stresses of what it takes to just operate your store and how little time you have left over. … We have to have programs that are very user-friendly for franchisees so it’s easy for them to implement.”