As the coronavirus crisis dragged on late last spring, Rohini Dey, owner of Vermilion restaurant in Chicago, invited 16 female restaurateurs to join her for virtual brainstorming sessions called “Let’s Talk.” The goal was to share ideas, resources and support to keep their businesses afloat during the pandemic, says Mary Nguyen Aregoni, chef-owner of Chicago’s Saigon Sisters and one of the participants.

Some of the women knew each other while others knew of each other; famous names including Deann Bayless of Frontera Grill, Beverly Kim of Parachute and Kumiko’s mixologist Julia Momose were among the members. The Chicago group now numbers 25 and Dey has expanded the idea to other cities, including Los Angeles, Washington, D.C. and Philadelphia. 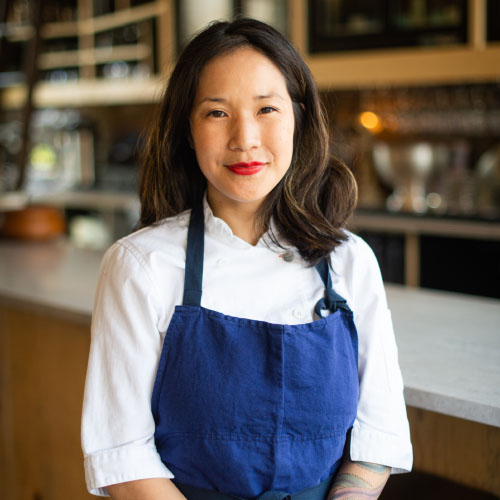 Independent restaurants have struggled for mere survival over the last seven months, with more and more shutting permanently every week. As winter approaches and a second wave of coronavirus is predicted, it’s expected that many more indies will close their doors for good.

But like the Let’s Talk group, chefs and restaurateurs around the country are banding together to implement survival strategies. Instead of competing with each other for customers, they are collaborating to collectively boost everyone’s business.

From brainstorm to action

Aregoni and another member of the Chicago group, Tigist Reda of Demera restaurant, had successfully put together to-go dinner packages of Vietnamese and Ethiopian food to expose customers of each restaurant to a different menu and brand. From that sprung the idea for Let’s Talk to initiate a four-week dinner series called FLAVOR–October Tastings. 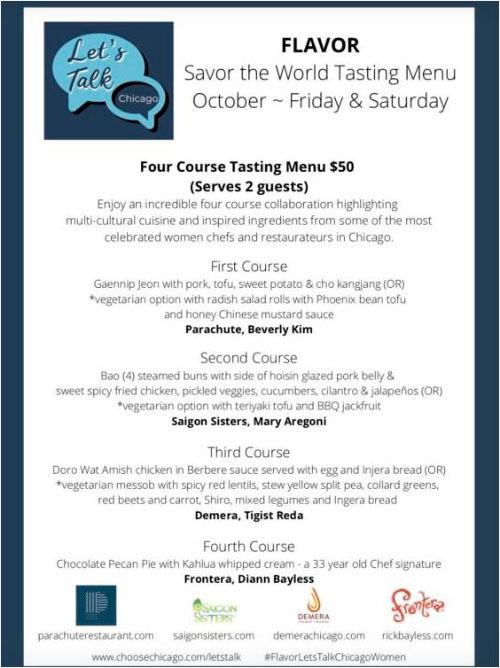 Each weekend, four restaurants join forces to curate a four-course dinner that’s packed to go. Customers pay $55 per person and place orders with Tock, the online reservation platform, by Wednesday of each week. Tock arranges for central pickup spots in the city and suburbs. Delivery is also available for an extra fee paid by the customer. 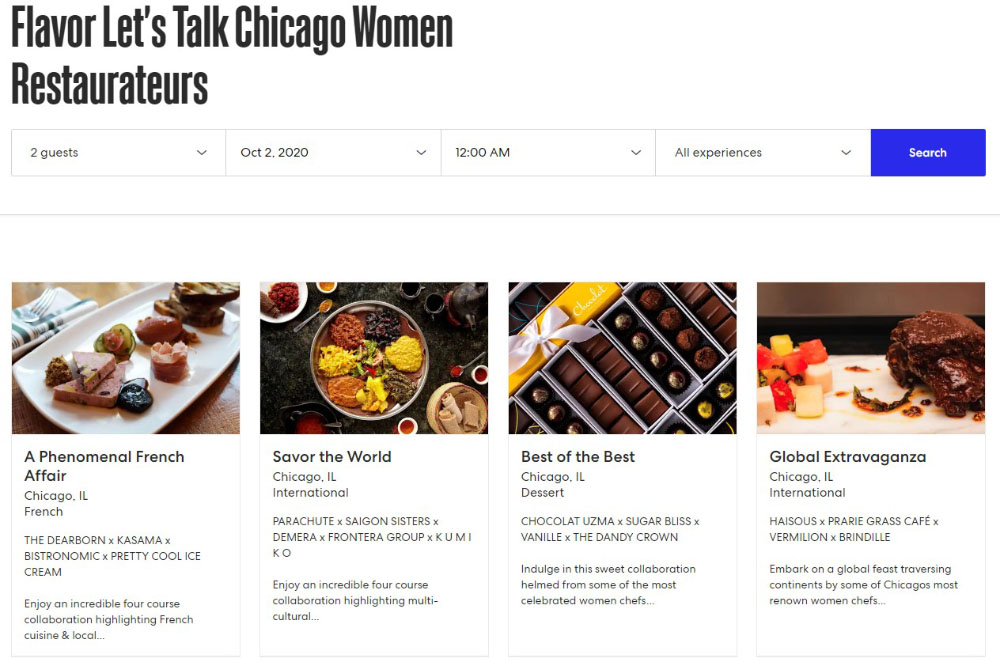 Aregoni contributed to the “Savor the World” menu that offered a Korean appetizer of pork, tofu and sweet potato from Parachute, steamed bao buns from Saigon Sisters, an Ethiopian chicken dish from Demera and chocolate pecan pie with Kahlua whipped cream from Frontera. All the dishes are cooked and packed cold to be reheated at the customer’s home. 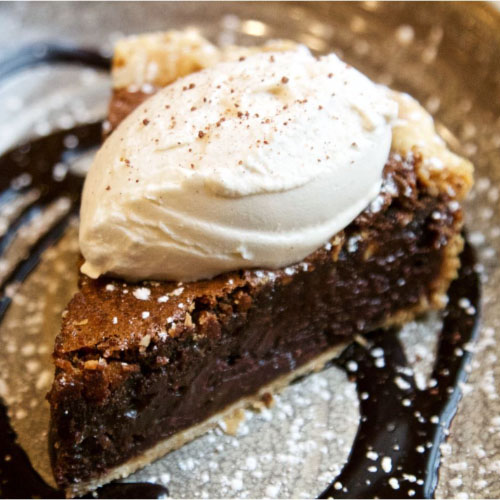 “All the meals are curated so customers don’t have to pick up individual components from different restaurants,” says Aregoni. “We capped orders at 80 and quickly sold out. People loved the idea and even ordered several packages to serve for small dinner parties.”

Dey, who co-founded the James Beard Foundation Women in Culinary Leadership Program, was able to work her connections to get marketing support from JBF as well as Choose Chicago and the Illinois Restaurant Association. But each of the women chefs had a skill or talent to contribute to make the idea work, says Aregoni. 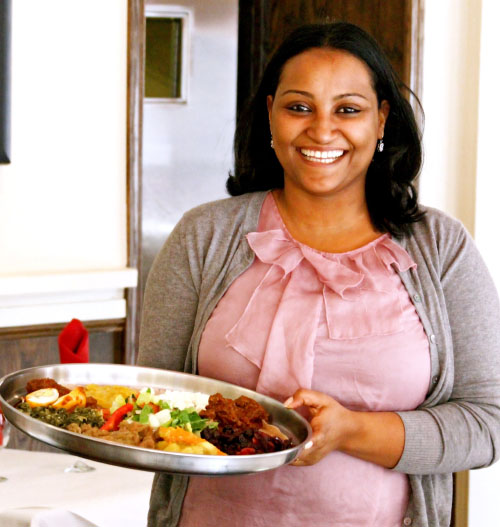 She is well versed in technology and brought in Tock as a partner, while Reda has accounting experience and was able to disperse the proceeds, as all the funds came into one account. Dey is the marketing guru and pastry chef Dana Cree of Pretty Cool Ice Cream came up with the catchy branding.

“All the planning was virtual and we got this off the ground in two weeks,” says Aregoni. “Everyone came together without competing against each other and we built great camaraderie.”

Get in the Kitchen, a Chicago cooking school, hasn’t held in-person classes since March. But instead of letting the space go idle, it turned the facility into a kitchen for furloughed chefs. The school partnered with chefs who were temporarily out of work, providing them the space and equipment to cook up dinners and meal kits. Customers have been ordering from the Furloughed Chefs Pick-Up Program since June.

Get in the Kitchen owner Jason Bailin is one of the chefs cooking carryout meals for curbside pickup. The other four chefs pay him a small rental fee for use of the space and equipment. Each has a specialty, from Asian comfort foods to pasta kits and Midwestern dishes with a French accent.

Together, the chefs helped Bailin create five weekly food and drink menus for customers, and it’s been a great symbiotic relationship, he told Block Club Chicago, a neighborhood news outlet.

Although not quite as grassroots an effort as the two Chicago initiatives, Los Angeles launched its own collective cooking event this month. Organized by hospitality platform Resy and American Express Gold Card, the Resy Drive-Thru gathered ten chefs who orchestrated a 10-course restaurant tasting around the exterior of the Hollywood Palladium.

Tickets, which were $95 per person through Resy, sold out in 15 minutes, according to a Resy spokesperson. 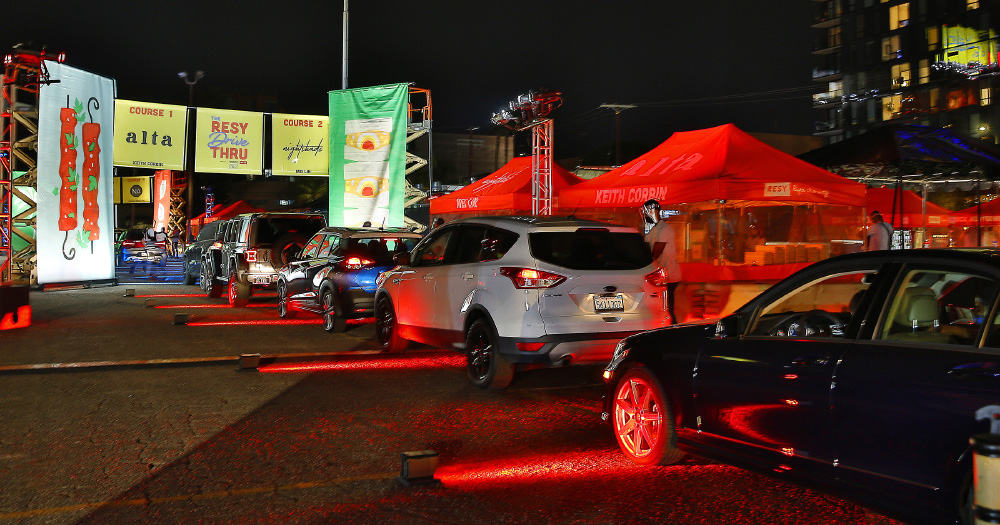 Upon entering the park, customers were assigned a designated waiter to guide their car from “restaurant” to “restaurant,” each represented by a socially distanced tent. Dishes were served to guests through their car windows. By the time diners drove away, they had experienced a 10-course collaborative tasting menu. 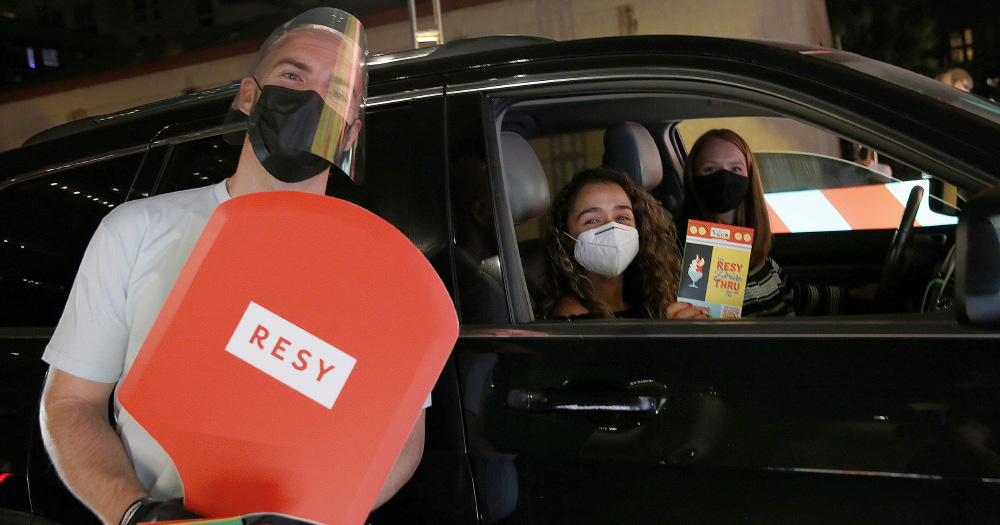 Pre-COVID, independent restaurants frequently participated in taste-arounds like these at food and wine festivals and fundraisers, but the pandemic has largely left chefs stranded to create their own experiences. Resy reconnected the L.A. chefs for two nights in October, offering financial and logistical support to pull off a similar event.

Proceeds from the Resy Drive-Thru are being donated to World Central Kitchen, but the event also provided revenue for the participating restaurants and helped them reconnect with customers and keep their brands top of mind.

While these events do bring in a bit of income to help restaurants stay afloat, there’s also a valuable long-term benefit. “We built an amazing database,” says Aregoni. “And 90% of the names in that database are new customers.”

The Let’s Talk women are already brainstorming future projects. They’re looking at doing more dinner packages for suburban locations and realized they could charge a bit more, says Aregoni. Also coming up is a collaboration on holiday gift baskets filled with specialty food products from each of the chefs.

Resy is also focusing future programming on collaborative events. “The Resy Drive-Thru is the first example of how we will continue to partner with our restaurant network to think and dine out-of-the-box, unlock new revenue streams for them and deliver for our community of restaurant-obsessed diners,” founder Ben Leventhal said in a statement.