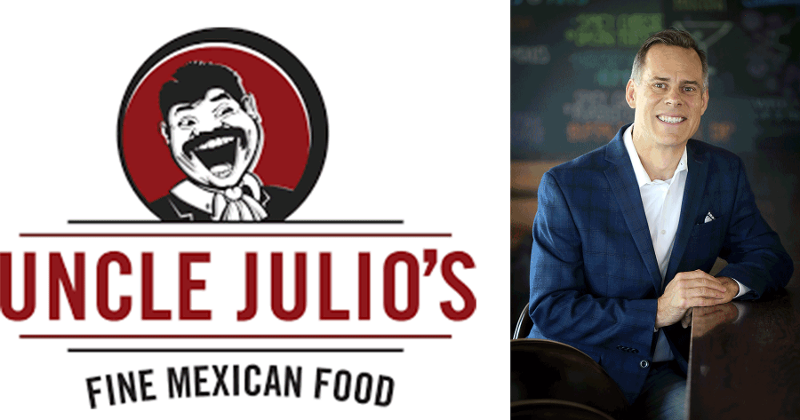 Dan Wheeler, a force behind Dunkin’s evolution into what executives describe as a beverages-led grab-and-go concept, has joined Uncle Julio’s Restaurant Group as CMO.

Uncle Julio’s is the operator of a namesake brand of full-service Mexican restaurants and a second concept called Hacienda Colorado. The company operates 35 restaurants across 11 states. The corporation says Wheeler’s duties include the development of a virtual concept and the adoption of new marketing technology.

He will also be responsible for brand strategy, menu innovation and the development of new revenue sources, according to an announcement from Uncle Julio’s.

“Dan’s restaurant experience and innovative perspective make him a perfect fit for the stage we are at as a company,” Tom Vogel, CEO Uncle Julio’s Restaurant Group, said in a statement. “He will play an important role in driving growth across all of our concepts as we accelerate the pace of new initiatives related to growing off-premise and on-premise sales.”

Wheeler, a 30-year marketing veteran, was most recently SVP of marketing and innovation for Wahlburgers, the restaurant and food-product company launched by entertainment stars Mark and Donnie Wahlberg and their brother Paul, a chef.

Earlier, he spent more than eight years in marketing jobs for Dunkin’, the doughnut specialist that has been striving to reposition itself in recent years as a broader-based convenience option. Wheeler rose to VP of innovation, with direct involvement in the development of what Dunkin’ calls its restaurant of the future. The new prototype features such attractions as a variety of cold coffees on tap, grab-and-go beverages in containers and a front display case of doughnuts. The re-do has been described by Dunkin’ CEO Dave Hoffmann as a key component of the transformation of the brand, which was formerly known as Dunkin’ Donuts.

Wheeler also served as VP of advertising and marketing for the U.S. operations of Baskin-Robbins, Dunkin’s sister concept. Baskin-Robbins specializes in ice cream and other frozen and chilled indulgence items.