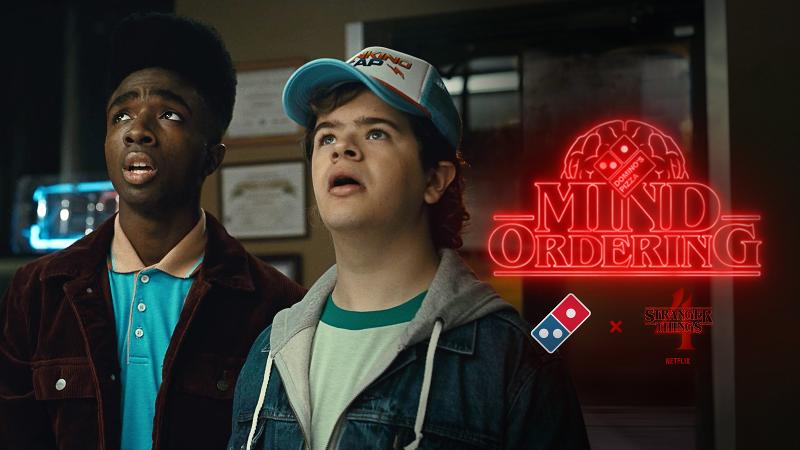 If Domino’s latest ordering trick seems out of Stranger Things, it’s because it is.

The Ann Arbor, Mich.-based pizza chain on Monday said that you can now order pizzas with your mind, at least on the company’s new mind ordering app in connection with the popular Netflix series “Stranger Things.”

Users of the app are “test subjects” at the Hawkins National Lab in Hawkins, Ind. They can explore the lab, uncover Easter eggs and use telekinetic powers to gain control of certain objects and place a pizza order.

In reality, the mind ordering app uses facial recognition and eye-tracking technology to allow customers to use their “powers” to order pizzas by making certain facial expressions or head movements. Customers need to have a Domino’s pizza profile with an “Easy Order” saved for the mind ordering to work.

“Is mind ordering real? At Domino’s, it absolutely is,” said Kate Trumbull, Domino’s SVP of brand and product innovation.

Customers who do not have a pizza profile can use the app for fun.

The app is available on Google Play and Apple’s App Store. Domino’s is also rolling out ads for the new mind ordering app along with the Stranger Things characters Dustin, played by Gaten Matarazzo, and Lucas, played by Caleb McLaughlin. Domino’s has also created a mind ordering website.

The company is also rolling out a 1980s-era pizza box for medium and large pizzas for a limited time across the U.S. The fourth season of Stranger Things premiers on May 27. A second volume premiers on July 1.

Stranger Things is set in the 1980s and revolves around a group of kids who uncover mysterious happenings at a nearby government-owned lab. The show also provides a healthy dose of 80s-era nostalgia.