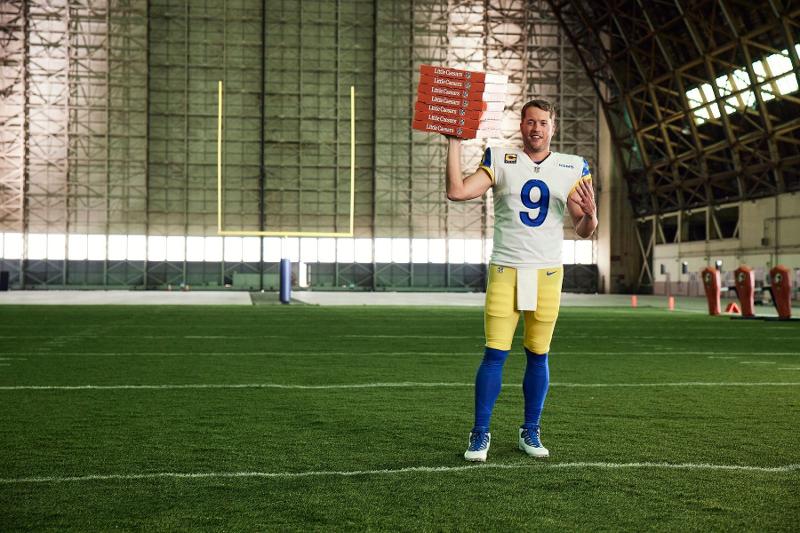 Detroit-based Little Caesars is turning to a former Detroit-based football player for its new NFL sponsorship.

Matthew Stafford, who quarterbacked the Detroit Lions for years before he was traded to the Los Angeles Rams before last season, will appear in Little Caesars’ first football-themed ads as it kicks off its multi-year deal to be the official pizza of the NFL. The Rams won the Super Bowl last year with Stafford.

“As a leader in the pizza business, it made perfect sense for Little Caesars to partner with a leader on the field, the most recent Super Bowl champion quarterback,” Greg Hamilton, SVP of marketing for Little Caesars, said in a statement.

The first television spot will feature Stafford in a training camp-like setting with Little Caesars employees and football fans, “training” to get a Little Caesars pizza. The advertisement was created in partnership with the creative agency McKinney.

The ad comes as Little Caesars takes over the sponsorship from Pizza Hut, which was the official pizza of the NFL for three years after it took over for Papa John’s, whose years-long relationship with the league ended in a dispute over players kneeling during the national anthem.

For Little Caesars, the nation’s third-largest pizza chain with 4,100 U.S. locations, the deal is an opportunity to further boost its delivery business. The company launched its new digital ordering platform and delivery services in 2020. The delivery comes along with its strong takeout business, fueled by its “Hot-N-Ready” pizzas that are preprepared.

“Working with Little Caesars has been a great experience,” Stafford said in a statement. “I had a lot of fun getting a sneak peek at some of the amazing things they have planned as the official pizza sponsor of the NFL, including this commercial.”

The company plans to start the sponsorship with a contest offering prizes, including tickets to the next Super Bowl. Customers who order a pizza before a game will be automatically entered into the contest. The “Pizza!Pizza! pregame” promotion starts on the first day of the season, Sept. 8.

Little Caesars will also feature a charitable venture featuring its “Love Kitchen,” a restaurant on wheels that will visit NFL event cities this year to serve communities in need. That effort starts in Los Angeles on Wednesday, Sept. 7.