Mariah Carey doesn’t just get a meal named after her this holiday season at McDonald’s. She is getting an entire menu.

The burger giant, which has named preconfigured meals after a succession of musicians to considerable success over the past year, on Wednesday said that the “Mariah Menu” will come to its app this holiday season.

The menu features “12 Days of Deals,” featuring a free item given away each day on the 12 days leading up to Christmas. Customers who spend at least $1 on the app can get one of the items for free, starting with the Big Mac on Dec. 13 and finishing with chocolate chip cookies on Dec. 24.

“Some of my favorite memories with my kids are our family trips to McDonald’s,” Carey said in a statement, noting that she gets a cheeseburger with extra pickles. 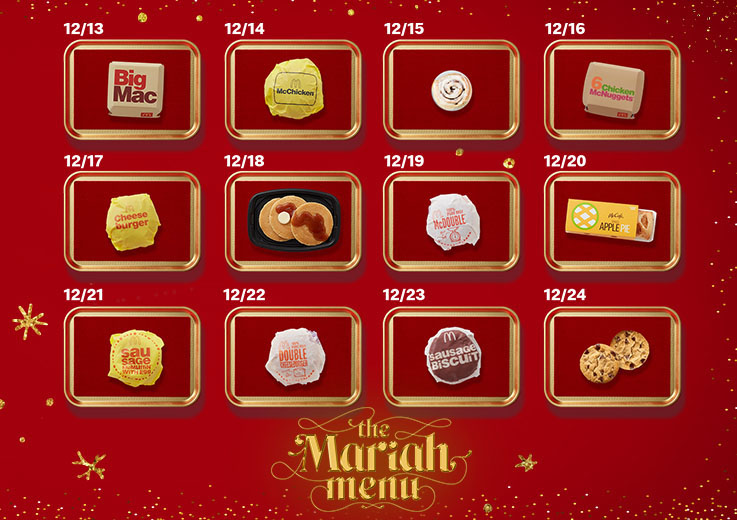 For McDonald’s, it’s another big name on its “Famous Orders” platform that started with Travis Scott last year and has featured J Balvin, Saweetie and BTS.

These meals have helped drive sales of around 15% on a two-year basis in the U.S. in each of the past two quarters. “There’s certainly more we can do with Famous Orders,” CEO Chris Kempczinski said in July. “But we’ve got to keep coming up with new ideas from a marketing standpoint.”

In this instance, the company is working with among the holiday season’s most iconic celebrities. “All I Want for Christmas is You” was released in 1994 and has become a constant on holiday playlists since then. It hit No. 1 on the Billboard Hot 100 chart in 2019, for instance, 25 years after its release.

“Mariah goes with the holidays like ketchup and fries,” Jennifer Healan, VP of U.S. marketing, said in a statement.