Betting that Gen Z and Millennials are thirsty for younger, newer brands, Blank Street Coffee has been on a growth tear that will soon get a boost from a move to ecommerce.

It’s an important step in building brand awareness for the rapidly growing chain, but also an effort to become ingrained in the daily rituals of coffee drinkers, who tend to form long-lasting habits. If they can’t visit one of the chain’s 50 or so tiny coffeeshops, soon they’ll be able to drink it at home.

Blank Street was first launched by Menda with partner Issam Freiha in Brooklyn, N.Y. at the height of the pandemic in August 2020. The first unit was in a 50-square-foot coffee cart, and the goal was to build a brand around a simple menu of specialty coffee at the level of quality found in higher-end shops but at a more accessible price.

In New York City, for example, offerings start at about $2.75 for a basic filtered coffee with no add-ons.

The first brick-and-mortar location opened in February 2021, and now the chain is rapidly expanding its mini cafes in New York (45), Boston (soon to be three), Washington, D.C. (two are open and another 10 planned by end of next year) and London (10). 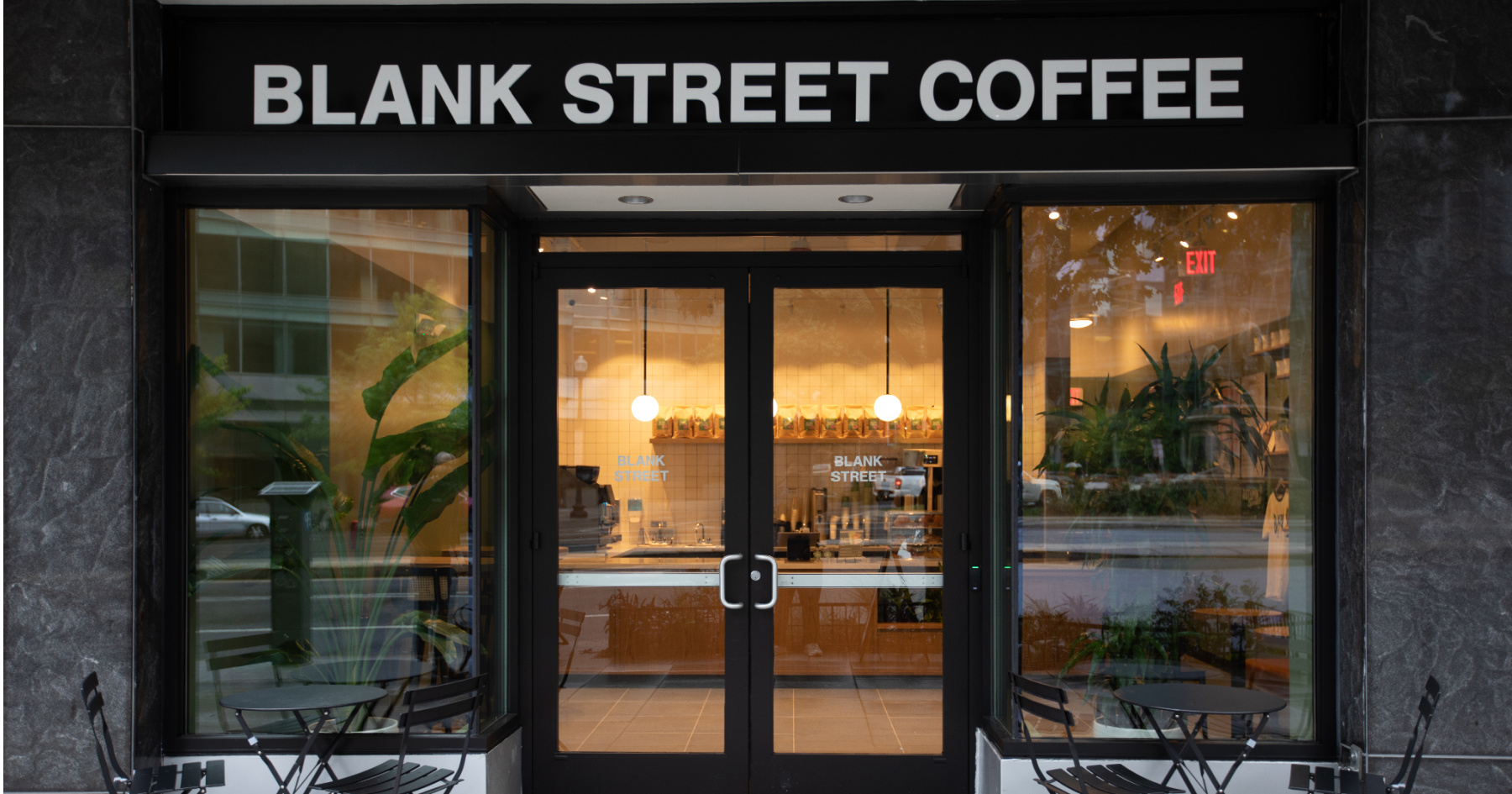 Blank Street moved to DC this year and has plans to open 10 there by end of 2023./Photo courtesy of Blank Street Coffee.

That growth has been supported in part by $67 million raised to date from investors that reportedly include General Catalyst, Tiger Global and the founders of Allbirds and Warby Parker.

Menda said it’s a model that works in the growing coffee space, offering speed, the convenience of digital ordering and low price.

The chain is able to keep prices low by keeping costs down. The average Blank Street unit is about 400-square feet, and the concept can be operated with only two baristas per shift, compared with five or six for a more-traditional coffeeshop, Menda said.

Blank Street locations use semi-automated Eversys espresso equipment, which allows baristas to pour multiple shots at the same time with consistency. Baristas can provide better service facing guests, rather than having their backs turned while they make drinks, Menda said.

The lower investment model also allows Blank Street to pay workers more, he said. “The average barista in New York is making $27-$28 per hour, including tips,” he said.

Food offerings are supplied by local vendors, and Blank Street keeps the drink menu fairly simple, though there are seasonal offerings, like the fall menu additions of Mike’s Hot Honey Latte, a Blended Pistachio Latte and a Blended Pumpkin Spice Latte.

In the beginning, Blank Street relied on local coffee roasters, but in August this year the brand began roasting its own beans, paving the way for the ecommerce move ahead and to ensure brand consistency across multiple markets.

Speed Dial is a blend of beans from small farms in Brazil, where coffee beans are extracted using the natural process of putting the fruit out in the sun to dry, and Nicaragua, where beans are removed by water washing—each method adding unique flavors, the company said. 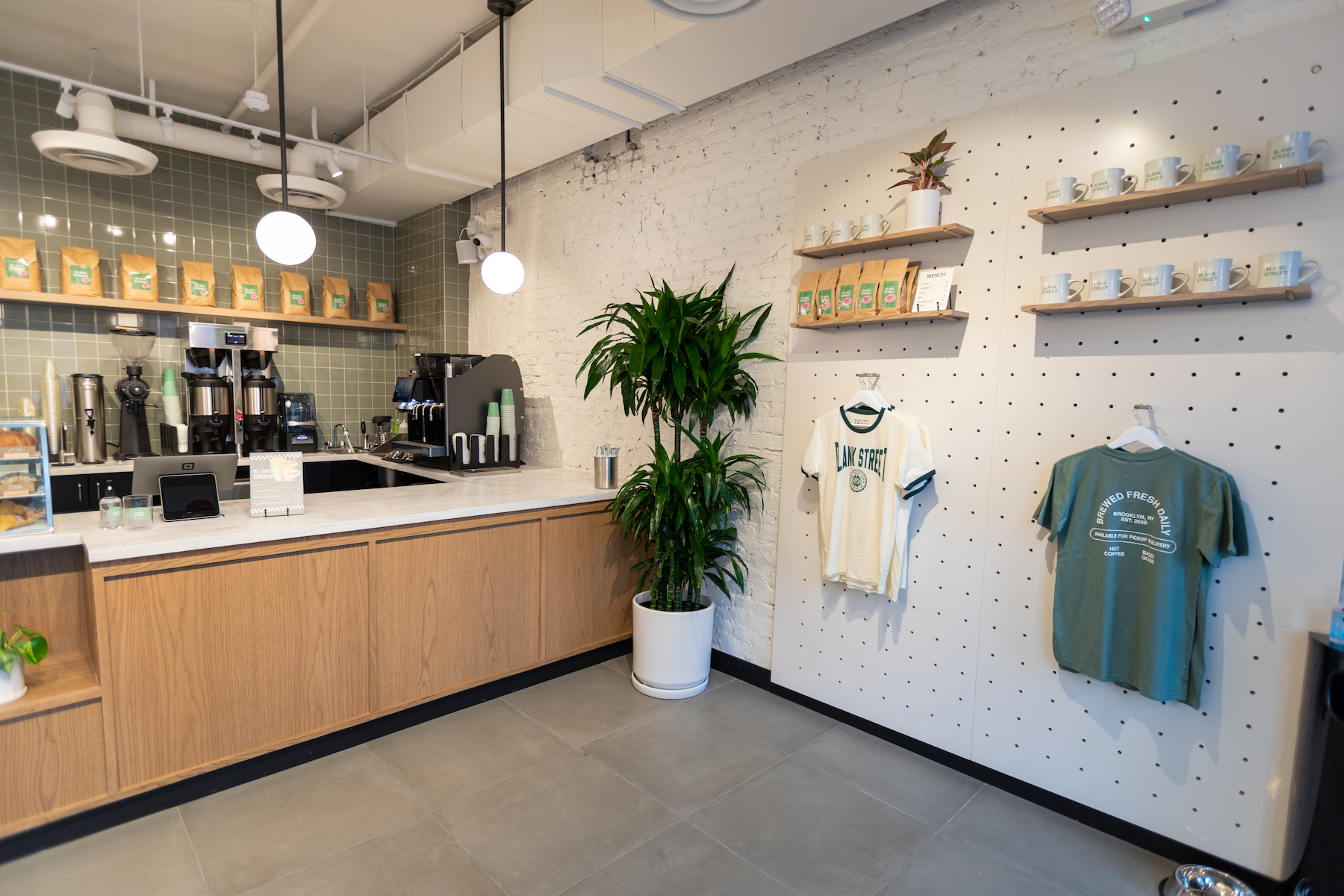 There are no immediate plans to franchise, Menda said, though they’re not opposed to the idea down the road.

For now, the focus is on filling in growth in existing markets.