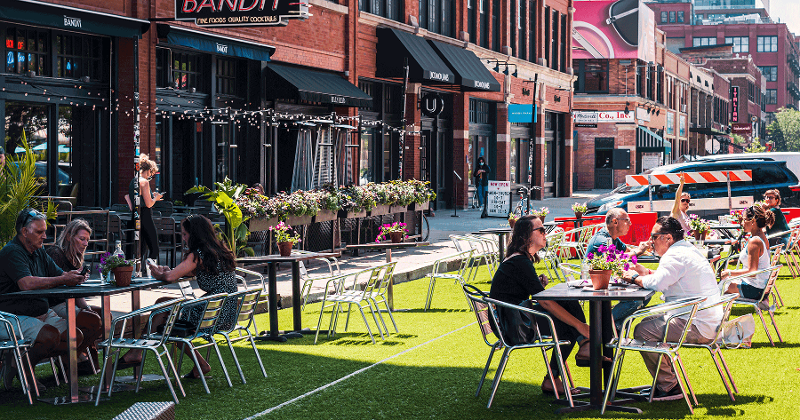 The idea was unusual to start. Eager to provide local restaurants with outdoor dining options that could survive Chicago’s notorious winters, the city asked residents to air their ideas, with a $5,000 prize going to whoever hatched the best notion.

The contest drew 643 submissions, many underscoring the novelty of the competition and proving Chicagoans have a sense of humor. Here are some of the suggestions that we’re pretty sure will not win be the winner, which is due to be announced early this coming week.

Radiant rats
Why always rely on outdoor heaters, especially when they’ve soared in price because of the spike in demand this winter? One submitter, Niki Hughes, suggested the city keep outdoor diners toasty by relying on an abundant natural source: rats. She suggested that the vermin be heated on radiators and then released among customers.

Heat-emitting furniture
Many of the submissions call for ramping up the functionality of outdoor furnishings. One, for instance, recommends the development of stool-type seats that glow, providing light as well as a nice esthetic touch, and simultaneously generate heat. A slew of entrants suggested that tables be turned into heating elements, and at least one aired the notion of retrofitting table umbrellas with heating and cooling elements.

Customer Snuggies?
Restaurants have long relied on heat-retaining packaging to keep to-go orders warm. Why not do the same with customers dining outdoors? Submitter Scott Davis shared his idea for the Zip and Sip, a zip-up sleeping bag that customers crawl into. The patrons remain in a sitting position, with the bag catching and holding their body heat. To discourage theft, the bags could be affixed to the outdoor chairs.

World’s largest food court?
Multiple submissions suggest that McCormick Place, the sprawling exhibition hall that houses the industry’s annual convention, be turned into an outdoor dining mecca. The center’s sizeable parking lots could become a home base for food trucks, while the interior halls could be reconfigured into heavily ventilated food courts.

BYOH
This one is essentially the same as above, except that patrons would be encouraged to bring their own heaters.

Public-transit dining
Turn aging city buses and El trains into dining spaces by shearing off their tops, positioning some tables inside, and providing some type of heating element that radiates comfort from above.

Build igloos
With snow typically in abundant supply, use that as the building material for freestanding shelters.

Bring back the Chicago Ferris wheel
Hardcore locals know the Ferris wheel was introduced to America at the 1893 World’s Columbia Exhibition in Chicago. Why not recreate a big one, but with the gondolas equipped to serve as rotating dining spaces?