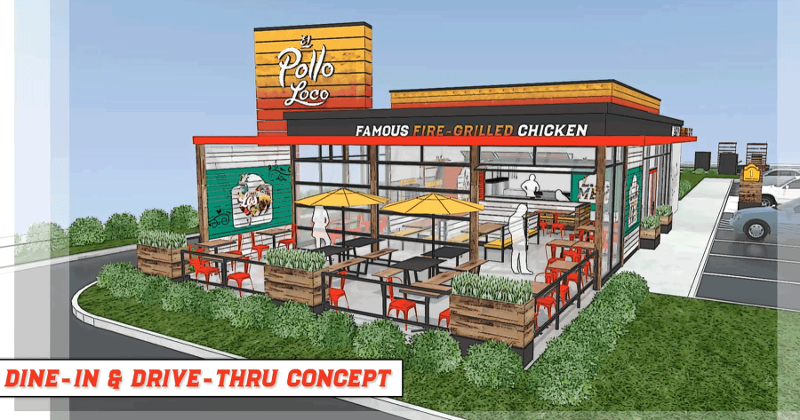 Fast-casual chicken chain El Pollo Loco on Wednesday announced two new restaurant designs, one of which does not include a dining room.

The brand’s “restaurant of the future” prototypes, which are starting to be built this quarter and into next year, capitalize on the massive consumer shift to off-premise dining amid the pandemic, El Pollo Loco said.

The chain’s second prototype features a “smaller-than-typical” dining room that opens onto a large patio via garage-style doors.

“When open, these garage doors seamlessly blend the indoor and outdoor experience and increase the comfort level of customers dining inside by enabling them to enjoy their meal in an airy, well-ventilated environment,” the Costa Mesa, Calif.-based chain said in a statement.

The restaurants will also include large windows, visible from the drive-thru lane, so customers can watch the chicken being grilled.

“The future is now,” El Pollo Loco President and CEO Bernard Acoca said in a statement. “We’re excited to roll out our evolved restaurant concept, which brings us to the culmination of the company’s three-year transformation agenda and sets us up for geographical expansion in the years ahead. This will be the catalyst to eventually get us back to 5% annual new unit growth across the U.S.”

El Pollo Loco, which has 479 locations, said in October it plans to open three to five company-owned restaurants next year, up from two in 2020. Its third-quarter sales returned positive, up 1.8% year over year.

The chain joins a large number of restaurants rolling out new prototypes during a still-surging pandemic in which many consumers have shifted their dining behavior away from on-premise business.

Burger King has a new design featuring a kitchen suspended over the drive-thru, with a conveyor belt delivering orders to the lanes. KFC’s new prototype features few, if any, seats, along with a double drive-thru; parking for delivery drivers and curbside; digital pick-up cubbies; and self-service kiosks. And Chipotle Mexican Grill recently opened its first Digital Kitchen, a restaurant with no seats designed to service orders for pickup and delivery.