Independent restaurant operators face an unprecedented crisis, one that could transform the characters of vibrant big cities and quaint Main Streets around the country. Cash-strapped and uncertain of government aid, independent restaurants are fighting for the lives of their businesses even as the coronavirus spreads.

But their fight reveals some essential truths about the restaurant industry, especially for small operators: They are compassionate. They are creative. They are resourceful. And they are resilient.

Here are stories from independent restaurant operators around the country as they grapple with the new industry landscape created by COVID-19. 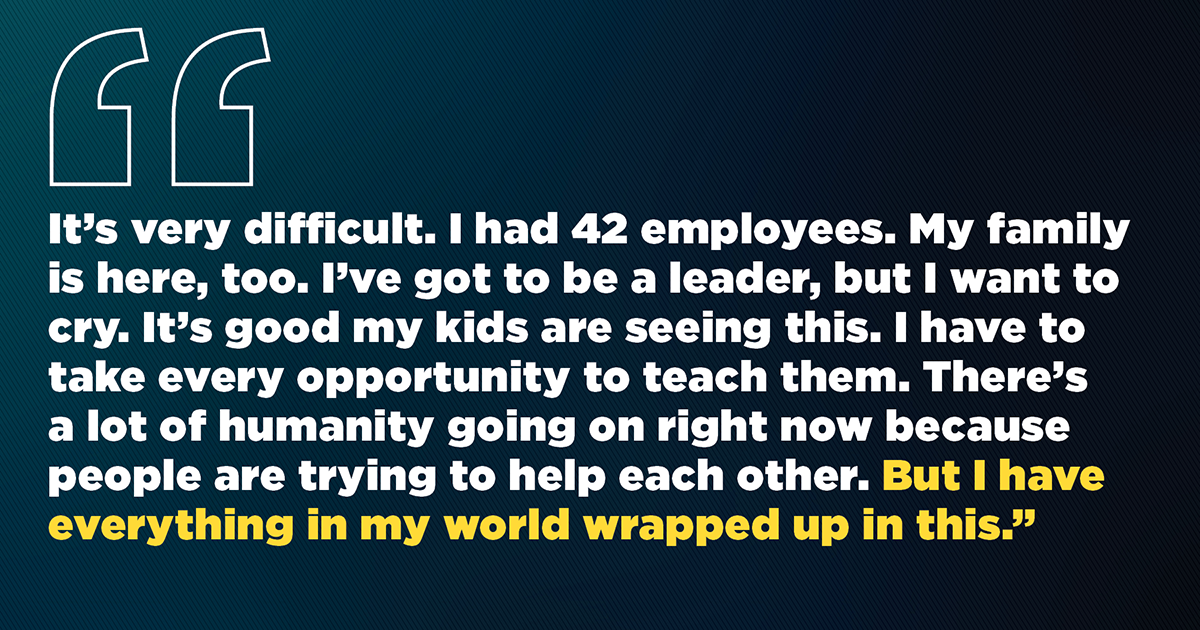 Jeremy Lieb didn’t have a choice. He and his wife “hocked everything” to start Sacred Beast, their upscale diner in Cincinnati, two years ago.

Two weekends ago, they were seeing record business. And then, boom. It hit.

Closing up shop was not an option. So they pivoted. Sacred Beast became Beast Mart.

Lieb closed the restaurant for a couple of days. He laid off his 42 employees. He had signs put up on the windows and launched a social media campaign selling kits that include lasagna, cheesy garlic bread, salad, pancake mix, 30 eggs and toilet paper. The kits are available by phone or online, for pickup only.

“Everybody needs toilet paper,” he says.

“I’m not going to make it selling $10 burgers during this,” he adds. “I’m going to start roasting up a whole bunch of chickens and some salads. I’m just taking it how it comes. I can change my world in here, that’s what I’m focusing on. 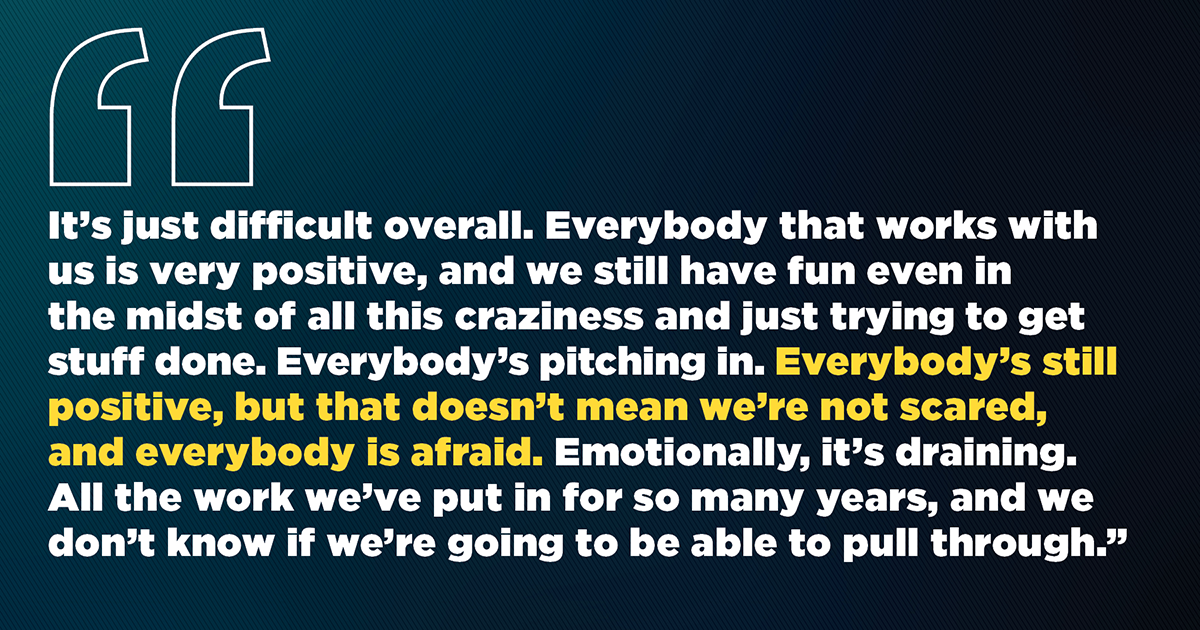 Miami-based SuViche Hospitality Group, which operates multiple locations of SuViche and Novecento restaurants, made the swift pivot to delivery- and takeout-only Wednesday. To keep cash flow up, the restaurants launched a “COVID-19 Stimulus Package” at its concepts, offering half off a variety of menu items.

“We have 400 employees,” Stahl says. “Part of our culture is we first want to watch out for our team. What can we do for our team? For our community? And, of course, to save the business? Everything is kind of connected.”

SuViche was forced to lay off most of its employees, keeping just high-level managers and handing out food to the rest.

“Right now, we just can’t pay everybody with no sales,” he says.

Remaining employees are taking pay cuts, and the group’s leadership has asked for rent abatements from landlords and help from utility companies.

“We don’t know how long it’s going to last and how long we can sustain this. We’re like the band in the Titanic. We just keep playing and smiling.” 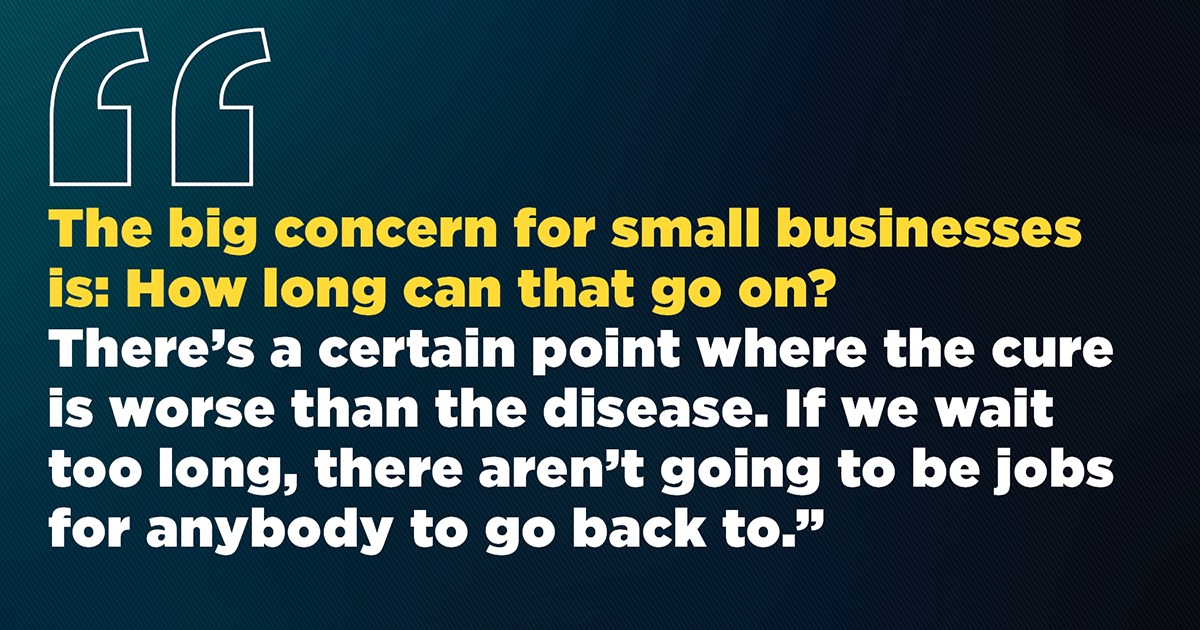 Tim Baker, operator of two full-service concepts in Seattle—the first major U.S. city to be hard-hit by the coronavirus—weighed his options, and none of them were good. Delivery and takeout were never a big part of his business, and switching them now, in the midst of a global pandemic, seemed foolish.

“There’s really been no alternative to just kind of shutting down,” Baker says. “In the last few weeks, we were scaling back and trying different things. But once the order came on Sunday to shut down, it was the last day of the payroll cycle and we were like, ‘OK. This is it. Everybody gets their check and we’ll see you next month.’ That’s been the cleanest approach to give the employees the ability to go after unemployment benefits and not play around with unpredictable hours.”

Baker’s son is the chef at San Fermo. He started freezing any perishable goods once traffic began declining. And now he’s turning that food into pasta sauces and other dishes, which are added to care packages for restaurant staff.

“There’s no doubt that the hardest part of this whole thing is the staff,” Baker says. “You’re talking about a workforce that is often very young, and they’re probably the most-significant paycheck-to-paycheck employees in the country. It’s a really significant wake-up call for all of us to realize the nuts and bolts of our economies has to do with everybody moving around and moving the dollars around. You take that routine and upend it and it’s catastrophic.” 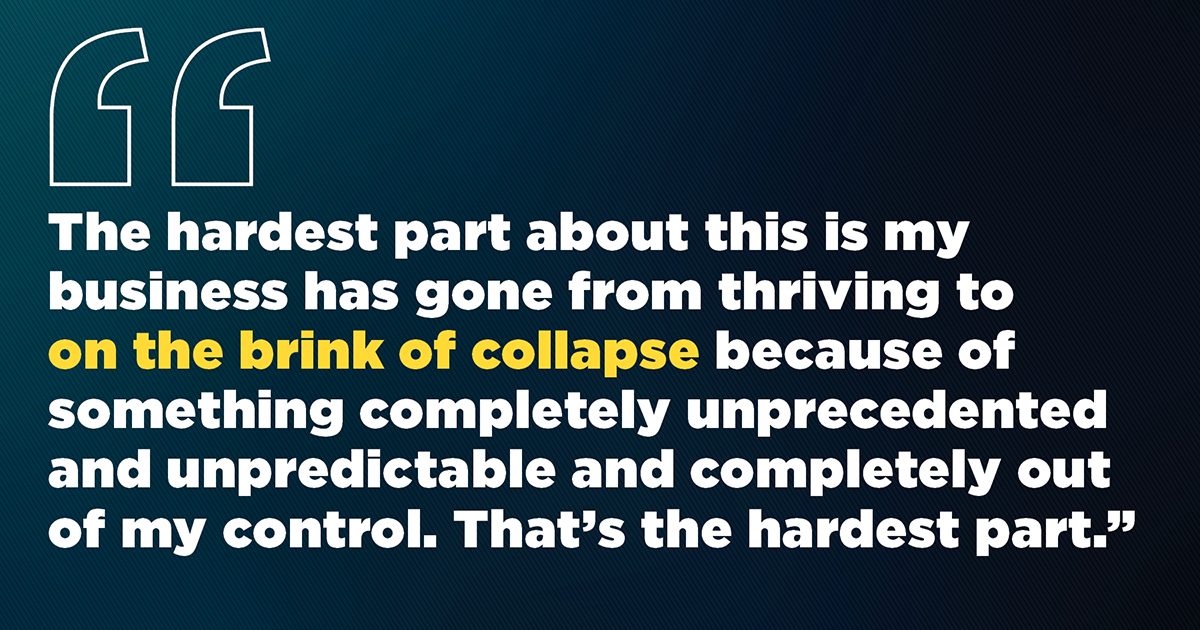 Ellen Sledge started her ice cream business seven years ago, with a pushcart at a farmers market. Since then, she has expanded to a retail store and, just a couple of months ago, she opened a small factory for wholesale production.

“Every aspect of our business has been hit,” Sledge says. “We had 11 event cancellations in one day. We sell wholesale to aquariums and zoos. Everybody is shut. We do festivals with the New York Botanical Garden. All of that projected revenue is canceled.”

Penny Lick, which specializes in nut-free ice creams, has all-but closed its scoop shop and is currently selling prepackaged pints from its store. Sledge went down from 12 employees to three.

What’s more, Sledge herself is under quarantine after coming own with symptoms of respiratory illness a week ago. She’s feeling fine now and hadn’t had contact with the store’s products for weeks before, she says.

“It’s really a tough moment to be in,” she says. “If you’re a small business owner, you really want to be in the thick of it right now. There is no restaurant owner who is really great at telecommuting from home.”

Ideally, Sledge says she would like to see more government leadership right now.

“Shelter in place would be good,” she says. “Shut us own for a month. I’ll take the pain now as opposed to months of this uncertainty and chaos. If you tell me, ‘This is going to hurt, you have to close for one month,’ I can plan for this. The rules keep changing and everything keeps changing.” 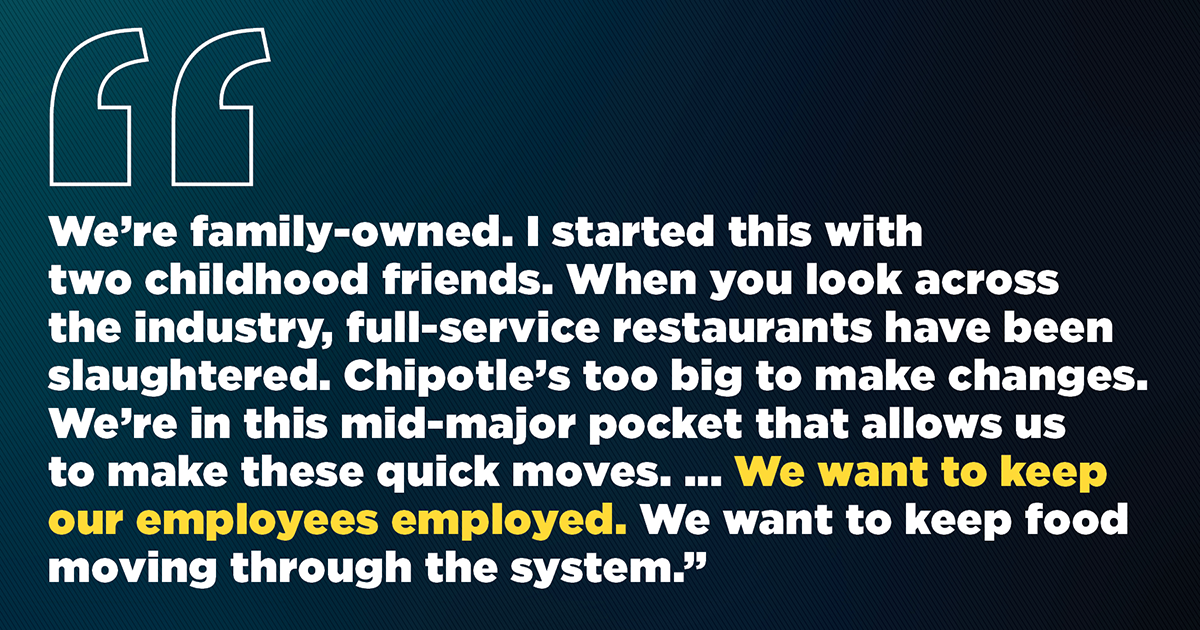 Harman, co-founder of 10-unit Ohio-based sushi concept Fusian, though of that as he looked at his business in the midst of the coronavirus pandemic. He realized the ingredients—rice, salmon, vegetables—were not much different than what most folks would want from the grocery store.

So the Fusian team morphed their online ordering system into an e-commerce platform with the launch Thursday morning of Fusian Groceries. The restaurants are still serving a full sushi menu, but customers can now add fresh produce and other groceries along with their meals.

Orders are available for pickup, but Fusian is encouraging delivery to promote social distancing to slow the spread of COVID-19. The team is bringing in wholesale produce and breaking down bushels for individual orders.

“I’m looking for incremental sales growth to crawl our way out of this hole,” Harman says. “We’re coming off a record-setting sales week. We went from wind in our sails to no wind at all.” 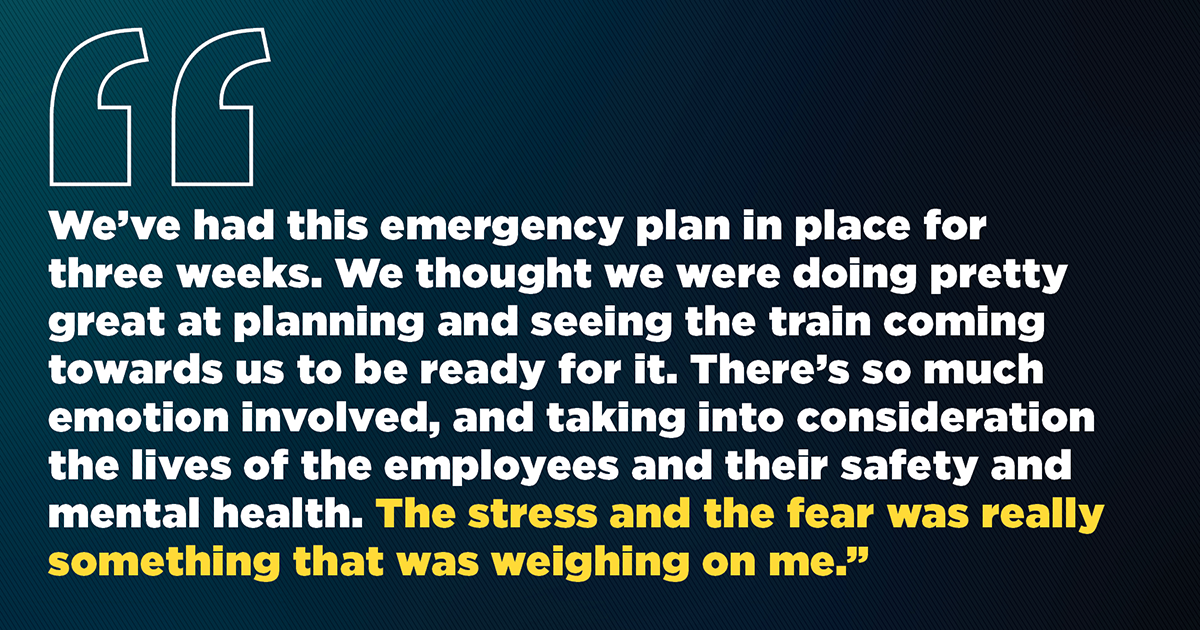 With the coronavirus baring down, she and her staff briefly pivoted to curbside takeout. But earlier this week, she made the difficult decision to temporarily close Floriole’s doors and lay off her 35 employees.

“There was really something that was weighing on me,” Holl says. “The idea that as owners and operators, by staying open, we’re prolonging this problem. I listened to a podcast about hospitals in Italy and numbers of people they can’t treat. And I thought, ‘Oh my god. What are we doing? This is crazy. We’re selling pastries. What’s the cost?’”

Plus, by keeping some staff on for limited hours, she was preventing them from receiving unemployment benefits.

Right now, she’s trying to prioritize her bills to keep the most cash on hand while the bakery is closed.

And during her down time, she plans to work on strengthening her business, creating detailed documentation of its operating systems so that Floriole can come back stronger than before.

In the meantime, she hopes to hear more from government leaders about aid to small businesses.

“There’s a lot of questions up in the air,” she says. “We can’t just keep operating like this.”