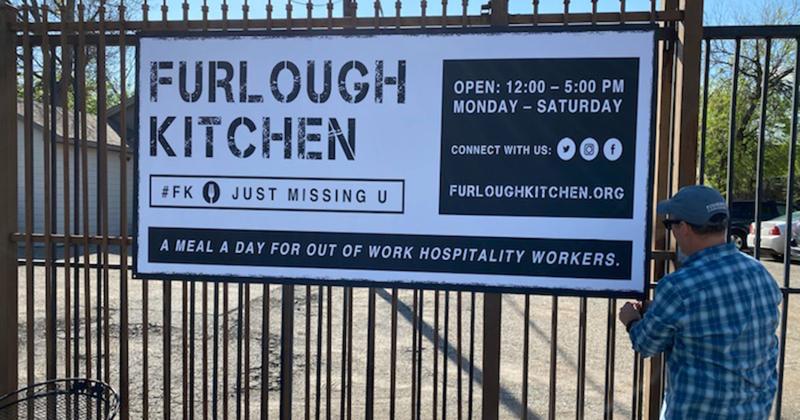 Not a single near-term booking is left on Front Burner Restaurants’ catering schedule, yet its Vestals dedicated events kitchen is in full swing. It’s part of a new reality the multiconcept operator is engineering to sustain its soul along with its business viability.

As of Wednesday, the Dallas facility started providing a boxed meal to any worker who’s been furloughed because of the COVID-19 crisis, whether they worked for Front Burner, a competitor or just another local business that had to temporarily cut its payroll.

It’s an echo of what the parent of Whiskey Cake and Mexican Sugar is doing in each of its restaurants. Any of the workers who’ve been furloughed by Front Burner can stop by their former restaurant every day for a free family meal kit.

The meal kits have proven the company’s business lifeline, according to CEO Randy Dewitt.  When the bottom fell out of the market last week, the chef-partner of a Front Burner-owned restaurant reported a daily sales tally of $5,000. “Every other restaurant was doing, like, $800,” says Dewitt.

By that time, the company had closed the dining rooms of all its concepts, which also include The Ranch, Sixty Vines, Haywire and Ida Claire. Every restaurant switched to curbside service for takeout and delivery, with the staffs adjusted accordingly.

Sales didn’t exactly set records. Steve Bale realized the prime dining concern for customers of his Whiskey Cake in Houston was getting their families fed. So he gathered together a gallon of milk, a pound of butter, a standard restaurant tray of 18 eggs, four raw burger patties, buns, sides and condiments, and put a grocery-level price on the kit, which he dubbed the Whiskey Cake Quarantine Survival Kit.

Bale’s marketing was limited to a mention on the restaurant’s Facebook page.

The kit was offered on a Monday. “By Tuesday, we were converting every restaurant to this concept of meal kits,” says Dewitt. “By Wednesday, we were calling back employees. We brought back managers first to do the cooking, and we brought back a few hourlies as servers, because people were giving big tips to help out, and we wanted them to benefit from that.”

The program has chugged along. The exact ingredients vary from day to day and from restaurant to restaurant, depending on what’s available and costs. The price also varies daily but is kept close to what a supermarket might charge.

“We’re going to make a go of it,” says Dewitt. “We’re nowhere near where we were, [but] we’re going to keep all of our restaurants open. There’s enough revenue there, and all of our employees who’ve been furloughed can come in once a day for a meal kit.”

But the company has been far from unscathed, even with the meal kits enabling the company to bring back 7% of its hourly workforce. Ninety-one percent of hourly employees have been furloughed. About 60% of the headquarters staff have been temporarily laid off. Managers and VPs are receiving 50% of their salaries, and compensation has been suspended for the company’s C-suite officers. They include a well-known new hire, Jeff Carcara, formerly of Bonefish Grill, Barteca and Seasons 52.

“Jeff called and said, ‘Should I still report for work?’” recounts Dewitt. “I told him, ‘Well, we won’t be able to pay you.’ Jeff said, ‘Hey, I’m not doing anything, so what the heck?’”

Dewitt says he can count on his fingers the number of times he’s cried as an adult. “By next week, I’ll probably use up all of my toes,” he wrote Saturday on his Facebook page.

He moved one digit closer to that limit while recounting how the coronavirus pandemic has affected Front Burner’s employees. The trigger point was the company’s new concept, Furlough Kitchen, formerly the no-name facility that prepared the company’s Dallas catering orders.

The company was all set to close it down when an idea occurred to Dewitt. Front Burner’s restaurants were staying open to provide meal kits, so why not do the same with a bigger kitchen?

“There are tens of thousands of peoples just in Dallas who are unemployed,” he says. “We’re going to make 1,000 boxed meals a day and just let people come get ’em.”