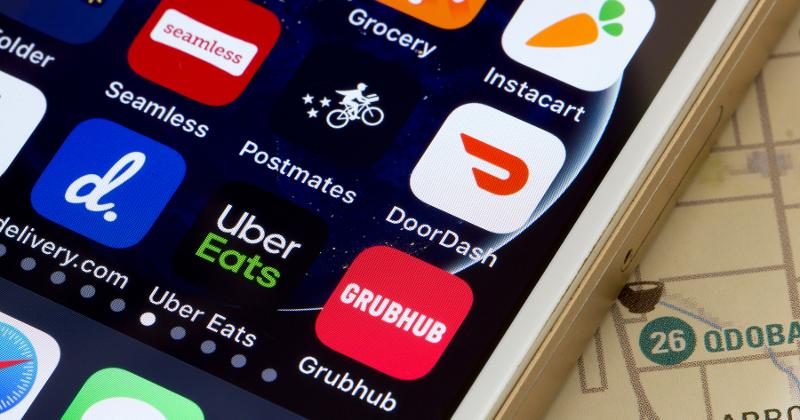 The pandemic has sent restaurant delivery into overdrive.

That became ever more clear in recent weeks as Grubhub and Uber Eats, two of the biggest third-party delivery companies, reported massive jumps across virtually every metric: Revenue, orders, new users and restaurant partners all rose significantly from April to June.

“Given the strength we continue to see in the third quarter, we now believe the pandemic has been less of a temporary demand spike and more of a permanent catalyst putting our business on a higher, sustained trajectory,” Grubhub executives wrote in a letter to shareholders late last month.

The reasons for these spikes are obvious. Consumers staying close to home amid the pandemic have flocked to delivery. They are ordering more food, more often, according to researcher Edison Trends, and a significant portion of first-time users are coming back a second time.

What remains to be seen is whether this boom will last, and in what form, when the pandemic subsides.

After all, delivery is not cheap, and the country’s economic outlook is stormy. Gross domestic product plunged 33% in the second quarter, unemployment remains in the double digits, and Congress has yet to approve a second round of stimulus checks for consumers.

But delivery companies, industry observers and restaurants themselves have been adamant that consumers are getting used to the convenience of delivery—and the costs—and that elevated levels will continue even after the pandemic is over.

“Yes, delivery is expensive ... and if we do head into an economic downturn and money is a little bit tighter, I do think that will impact it,” said Eli Portnoy, CEO of consumer research firm Sense360, during the virtual Food on Demand conference Monday. “But the flipside of that is that over the last several months, consumers have gotten really used to the idea of convenience … and so I think we’re still gonna see consumers use it at a much higher level than they were before.”

Vishal Agarwal, CEO of ItsaCheckmate, which helps restaurants integrate third-party services, disagreed with the notion that delivery is expensive in the first place. He argued that the time saved by using delivery is worth the cost, and that consumers understand that tradeoff.

“I think that realization has really dawned on a lot of people during this pandemic, and it may open up a lot more minds about how affordable delivery actually is now,” he said during the conference.

Restaurants, too, believe consumer demand for delivery will continue at high levels.

Bloomin’ Brands, parent company of Outback Steakhouse and Carrabba’s Italian Grill, saw its off-premise business triple during the pandemic. Even now, with 92% of dining rooms open, off-premise is continuing to make up 45% of its sales, executives said on the company’s recent second quarter earnings call.

“The investments we made off-premises, the carryout, the delivery business, that shift is going to stay,” said CEO David Deno on the call.

“That’s clearly where the customer is going, and we’ve got some very favorable third-party contracts, and we do a great job doing our own delivery. So we’re very pleased with the performance of sales and profit performance out of that channel.”

“The longer we’re in this pandemic, the more pronounced permanent changes are going to be.” —Andrew Charles, Cowen & Co.

Another variable that could impact delivery is consumers’ willingness to return to dining rooms once they fully reopen. More people dining out could ostensibly mean fewer people ordering delivery.

“As consumers become more willing and able to be out in public spaces, we’ll start to see where the use of delivery may change, either more or less, based on consumer sentiment,” said Sam Acuna, managing partner with Gallup, during Food on Demand.

As the pandemic drags on, though, consumers seem less willing to return to restaurants, according to research presented at the conference by financial services company Cowen & Co. As of mid-July, 52% of consumers surveyed said they would continue to avoid dining in once restaurants fully reopen, up from 36% in mid-April.

“The longer we’re in this pandemic, the more pronounced permanent changes are going to be,” said Andrew Charles, analyst with Cowen. He said he believed delivery will be “in vogue” for the foreseeable future.

“As the pandemic continues, we hypothesize that delivery will still be an important part of restaurants as far as how people are experiencing food.” —Sam Acuna, Gallup

As demand skyrockets, there are also signs that the form delivery takes could be changing. Though restaurants have come to depend heavily on third-party providers during the pandemic, at least some are now reconsidering those relationships, according to a recent study by financial services company Rewards Network. For example, 14% of restaurants using Grubhub said they would not continue, and 11% of DoorDash partners surveyed planned to cut ties.

Meanwhile, consumers have indicated they prefer ordering delivery directly from restaurants rather than through third parties. Nearly two-thirds said so in a survey by Sense360, compared to just 18% who preferred third party channels.

“The No. 1 reason was fewer fees, but the second reason, which I think is most interesting, is that they wanted the money to go directly to the restaurant,” said Portnoy of Sense360. “Consumers are very sensitive to sharing more of the revenue with the restaurant itself” during the pandemic.

And restaurants have shown more willingness to try their own delivery. In recent weeks, chains such as Portillo’s and Katz’s Deli announced self-delivery programs, and Shake Shack said it had plans for self-delivery as well.

“There’s a lot that’s still unknown,” said Acuna of Gallup. “As the pandemic continues, we hypothesize that delivery will still be an important part of restaurants as far as how people are experiencing food.”