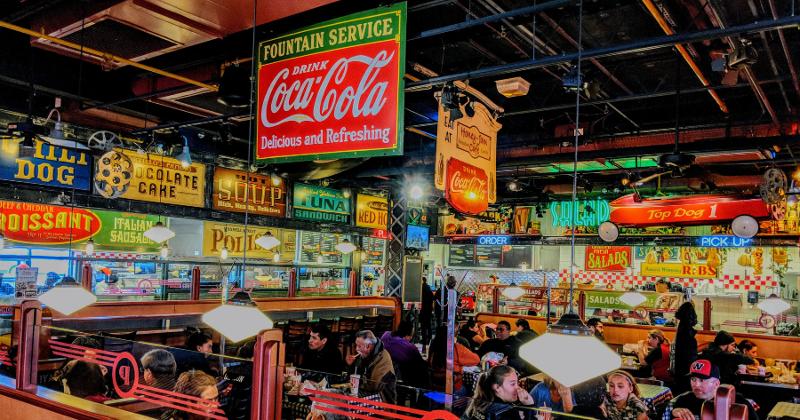 The typical Portillo’s is about 8,000-square feet and guests spend about $9.75 on average. But the chain’s restaurants in the Chicago area generate average unit volumes of about $10 million with margins at 30%.

That’s a lot of hot dogs, Italian beef sandwiches and chocolate cake. Those numbers are largely a result of Portillo’s very high volume. And that volume requires staffing. A typical Portillo’s might have 80 to 120 full-time staffers, with anywhere from 20 to 30 people working at one time, mostly in the kitchen.

But the cost of building new restaurants has grown considerably over the past year.

At the Morgan Stanley Global Consumer & Retail Conference last week, Portillo’s President and CEO Michael Osanloo shared how the chain has been finding new efficiencies to design future restaurants over the next two years as the chain grows outside Chicagoland.

Osanloo doesn’t call it value engineering, saying, “I don’t want to take anything away from the guest experience. I want our restaurants to be engaging and inviting. We compete with casual dining because we built beautiful restaurants.”

As Portillo’s develops its restaurants of the future, here are some examples of initiatives that Osanloo said have helped boost productivity and cut costs, according to a transcript from financial services firm Sentieo/Alphasense:

A quirky remnant of old-school Portillo’s locations is that salads are picked up from a separate spot after ordering. In the salad area, guests can watch their salad being made. And Portillo’s sells a lot of salads. Units average about $600,000 a year in salad sales alone.

But Osanloo said the salad ordering experience can be “unpleasant from a guest experience because if you’re going with somebody else, you kind of lose each other. If you’re with kids, it’s a disaster. It’s also a ton of conveyance and capital and so on.”

After testing it in one unit in Chicago, the chain is looking at a move of the salad area to the main kitchen, where there is underutilized space, he said. The move will dramatically reduce conveyance, and it will allow restaurants to take the equivalent of two full-time employees out of the kitchen at peak times. It’s also faster, said Osanloo.

“The food is made just as fresh, just as quickly, but it’s a home run. It’s capital savings, it’s space savings and it’s labor arbitrage,” he said. Existing units may also be retrofitted.

Portillo’s’ kitchen line is very vertical, said Osanloo. There are five to seven steps cooks have to make from the fry area to the outside expo area to send food to the drive-thru. Next year, Portillo’s is going to look at putting the fry area perpendicular to the line, so the fry cook can go one way or the other, to reach expo areas. The goal: reducing steps.

“It sounds silly to say this, but those five to seven steps that they don’t have to take is huge at our volumes,” said Osanloo.

In addition, he said, “We put freezers underneath the fry station, so that you don’t have to walk down to the freezer to get the next bag of fries or next bag of onion rings. They’re literally right there. And so you just pull them out and dump them in and keep going.”

“Happy people are more productive,” said Osanloo. The chain has raised wages over the past two years, and he said the benefits package is “super competitive.” The chain emphasizes cross training and development.

At Portillo’s, for example, team members that cross train and are certified to work more stations get paid more, he said. And it allows restaurants to be more nimble in staffing, which Osanloo called a “huge, huge unlock for us.

“Our productivity now is higher than any time in 2019 and before,” he said. “People just work a little harder because they’re happier. They’re trained. They’re well developed.”

Osanloo likes to have humans take orders because they are the best at upselling. He doesn’t want Portillo’s restaurants to look like “glorified vending machines” with kiosk technology, for example. But he does see an opportunity to take work away from humans in the back of the house.

Rather than asking team members to chop onions or tomatoes, or cut Polish sausages, Portillo’s is asking suppliers to prep certain ingredients to reduce labor.

“You only open a bag when you need it, you eliminate waste. You don’t have people putting on cut gloves, sharpening knives, doing low value-added labor,” he said.

Reducing friction for off premise.

Portillo’s is placing parking spots right outside an entrance for third-party delivery guys, or anyone who wants to pick up food. Another move is putting pickup shelves with the back to the kitchen, so food can be placed there easily. And the chain is looking at adding a third lane to drive-thrus to see if that helps with stacking and mobility.