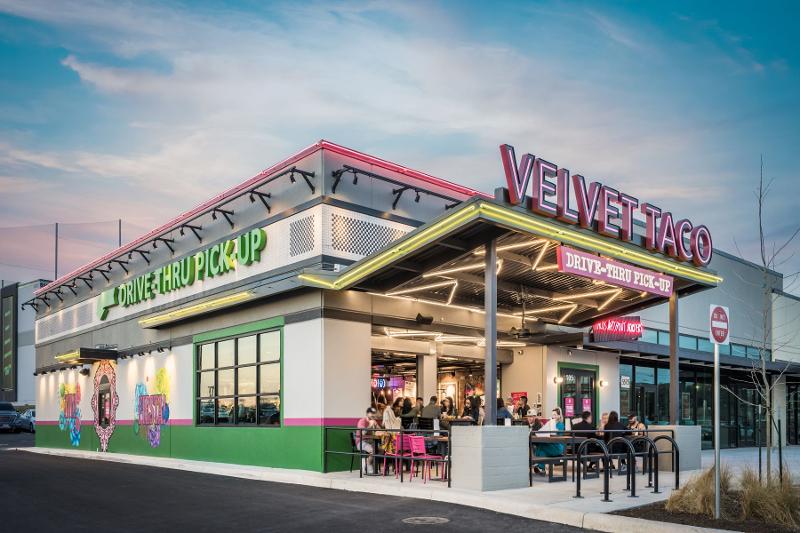 Fast-growing fast casual Velvet Taco is getting creative when it comes to real estate options as it adds new restaurants.

“It’s not a cookie cutter brand,” Dover said, noting that atypical sites can be successful.

The high-volume concept, which has 22 units in eight cities, opened three new units in March and five total restaurants so far this year. It has plans to open seven more new restaurants this year and a total of 15 locations in 2022. The chain is adding new markets, including Nashville, as well as expanding in existing ones.

“We opened four restaurants during the pandemic in 2020,” Dover said. “We were queued up and ready to open several more. We’re benefitting from sitting on some of those sites.”

Dover said he and his team have talked about the dangers of growing too quickly.

“We’ll continue to open one great restaurant at a time and when those standards start slipping, we’ll pump the breaks,” he said. “We want to be able to take advantage of the opportunities to grow as they come up.”

Velvet Taco’s growth is based on some new store formats for the chain, including order-ahead drive-thrus, which have proven successful for the brand.

Stores with drive-thrus are seeing 25% more digital orders than those without, which bring with them significantly higher check averages and greater ease of operations, he said.

Internal operations changes have led to a decrease of drive-thru ticket times of about 20% in recent months, he added, but he said there is still room for improvement.

The order-ahead drive-thrus, much like Chipotle’s Chipotlanes, cause some initial consumer confusion. In the first 10 days after opening a new location, about 20% of all cars pull up and try to order at the drive-thru, he said.

Employees working the window now present drivers with a QR ordering code and point them to designated parking spots where they can place an order on their phones.

“About four out of five guests pull over and go through the ordering process,” Dover said.

Velvet Taco still has a dining room-less restaurant in development. But Dover doesn’t see that prototype or ghost kitchens as major players in the brand’s future.

“Part of what makes Velvet Taco special is the atmosphere, the late-night music, the design and decor,” he said.