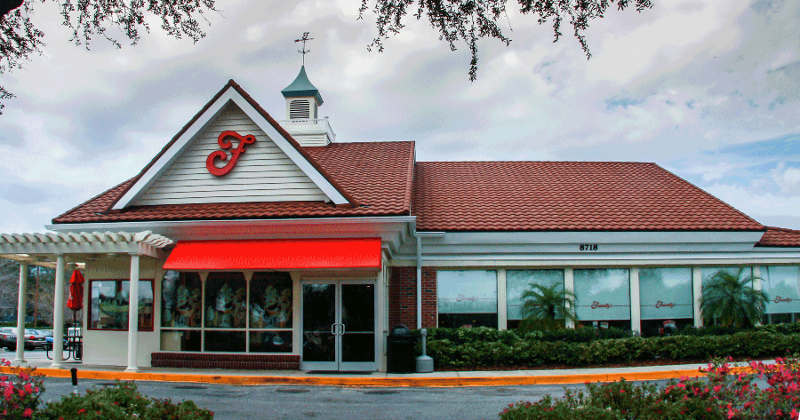 Regulars of Tim Hortons say it’s hard for non-Canadians to appreciate the singular place that restaurant brand holds in the lives of its countrymen, who view it as an integral part of the social fabric. Clearly they never asked a New Englander back in the 1960s about Friendly.

It wasn’t so much of a national cafeteria, as Timmy’s is often described, as it was a special treat that even the families of workers from the area’s paper mills, shoe factories and General Electric plants could afford—a dressed-for-Sunday experience that anyone in a blue collar could enjoy, be it for a burger platter or a double cone. It was where you went for birthdays, first dates, a Friday night break for mom or the reward for landing an “A” in math. One future restaurant writer even guilted his skinflint Aunt Mary into popping for a First Communion meal at the Friendly in Lee, Mass.

But as its legions of fans knew, Friendly—the ‘s wouldn’t be added until 1989—was not the Mayberry operation it might have appeared. Founders Prestley and Curtis Blake weren’t as prominent as the founder of that other home-grown dining option dotting mill towns and small cities, Howard Johnson’s clams and ice cream place. But they showed a real brilliance for aggravating persons of influence or wealth whom they didn’t like, which seemed at times to be anyone not named Blake. The struggles of will routinely spilled into very public view, keeping heads shaking over the Blakes’ audacity and orneriness for some 85 years, and possibly counting; Prestley Blake celebrates his 106th birthday later this month.

He was 20 when he convinced Curtis, two years his junior, to try their hands at the foodservice business. The boys took aim at the consumers who could still plunk down a nickel during the Great Depression for a scoop of ice cream at their local drugstore soda fountain. In 1935, at the height of the economic crisis, the plucky pair opened a place in Springfield, Mass., where a customer could get two scoops for the same five cents they were paying elsewhere for half as much of an indulgence.

Their financing was a $547 loan from their parents. The extent of their marketing was naming the place Friendly, a reference to the warm hospitality they promised. Their operational strategy was to have one brother make the ice cream while the other served customers. That also allowed them to forego employees.

The venture caught on—Opening Day brought $27.60 in sales—and the boys prospered. They decided to open a second unit in 1940 in the western portion of Springfield. But, after listening to customers, the Blakes decided to broaden their menus beyond ice cream at the new store. Their first item: A burger, served on bread rather than a roll, the norm at the time. The product remains a Friendly’s signature to this day.

‘We’ll be back after the war’

The boys took a break from 1943 through ’45 because of World War II. Their shops were shut, and the pair posted a placard in the windows that declared Friendly would be back after the war had been won. Sure enough, armistice brought a resumption of their expansion, with the tally of stores hitting 10 as of 1951, all in Massachusetts and Connecticut.

As more Friendly units followed, Pres, as he was called, focused on finance, sales and other hardcore business matters. Curtis concentrated on finding personnel and training them to be family-friendly. They decided who would be president by flipping a coin. Curtis won.

A move of their headquarters to Wilbraham, Mass., in 1960 would be a small notch in the chain’s timeline if it weren’t for the demonstration the transition provided of the Blakes’ feistiness. The pair acquired a strip of land visible from the highway leading into town and emblazoned it with a floral arrangement spelling out “Friendly” in letters large enough to be seen from an airplane. Arriving visitors saw not the name of their town, nor the nickname of the local high school’s team, but a plug for the resident restaurant chain. It would be a sore point for city fathers for decades to come.

The chain continued to sprout new units in its native New England, reaching the 500-store mark by 1974 without franchising, an expansion model the brothers abhorred, unlike that Howard Johnson fella.

During those fast-growth years, the Blakes brainstormed such innovations as selling ice cream in half-gallons from their restaurants for at-home consumption, and a seasonal limited-time offer, the Jubilee Roll, a holiday ice cream cake still available today.

They also hit on a unit format that promised to save on labor and shave serving times. They put the kitchen in a corral of sorts in the middle of the dining room. Seats were arrayed around the perimeter of the kitchen area, with a low barrier serving as the line of separation. The idea was to allow servers to roam inside the production area, take customers’ orders, and then walk a step or two to pass the orders to a cook. When the meal was ready, the server could walk the food a few steps to the customer’s table, lean over the partition, and set it down, never leaving the production area.

At ages 65 and 63, respectively, Pres and Curtis Blake decided to sell their $547 venture, then numbering 600 stores, to Hershey Corp., the candy giant, for a reported $164 million. As Friendly watchers knew, the two brothers were squabbling over the direction of their brainchild. The sale was a way of ending hostilities. Hershey’s Reese’s Pieces and Oreos became signature ingredients in Friendly’s sundaes.

Hershey provided capital and some fresh insights into the business, renovating older stores even as it built new ones, still all company operated. The Blakes, meanwhile, pursued other passions, including antique cars and philanthropic endeavors. Pres earned a PhD degree. 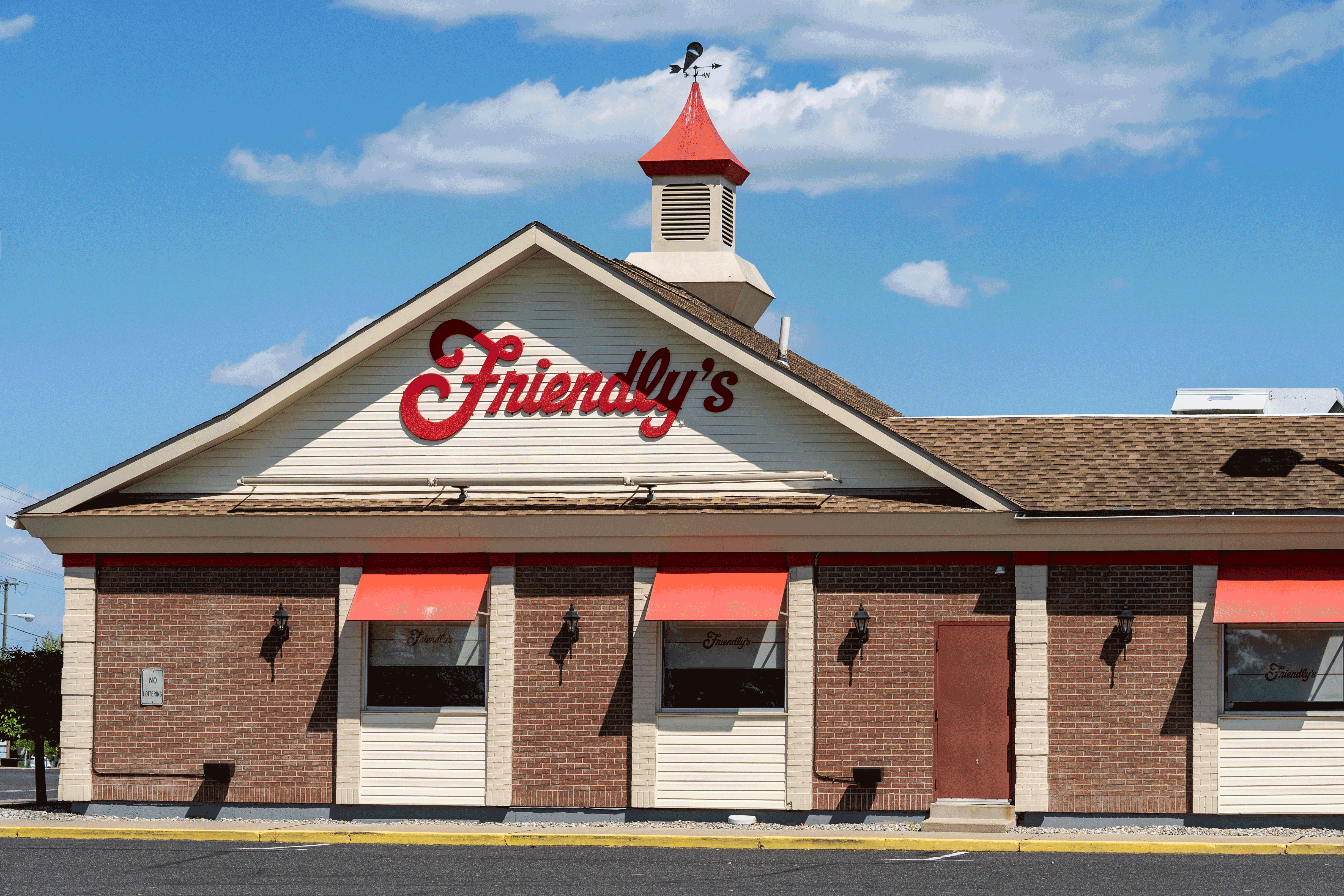 And the fight is on

But Pres snapped back into fighting mode after Hershey sold the chain in 1988 to a group led by Don N. Smith, a golden figure in the restaurant industry at the time. The fireworks that ensued would have made the Gucci family feel insecure.

Smith had a reputation back then comparable to the regard held today within the industry for the likes of Brian Niccol or Ron Shaich. For one thing, he was an alumnus of McDonald’s at a time when no one left that stellar success of an organization. He’d also served as president of Burger King during a major upswing period for that brand, and engineered Pizza Hut’s adoption of the Personal Pan Pizza, an individual-serving-sized pie that changed the dynamics of that operation. No longer did a party need to agree on a particular pie before heading to what was then a predominantly table-service concept. He seemed as close as the industry could come to a King Midas.

Ironically, he had capital and connections available after being bounced from a restaurant holding company he was trying to build on the foundation of a multi-hundred-unit Burger King franchise called Diversifoods. Smith tried to lead a $524 million leveraged buyout of the company, only to be ousted by his own board.

Instead, he teamed up with Holiday Inns to form a company called Tennessee Restaurant Co. (TRC). It had acquired the Perkins pancake chain, a direct competitor of Friendly, in 1985. Smith saw a major step toward building a collection of family-focused concepts in the acquisition of Friendly, agreeing to pay Hershey $375 million, or more than double what the candy company had paid the Blakes nine years beforehand. Smith was installed as CEO of Friendly, whose name he quickly changed to Friendly’s, while still running Perkins through TRC.

Looking from afar, Pres Blake didn’t like what he saw happening to his brainchild. The chain seemed to be expanding too quickly, and Smith changed the service model and tweaked the menu to nudge the brand a little farther up-market. It seemed to be losing its blue-collar focus. Pres was also convinced that Smith was favoring Perkins over Friendly.

The other lit fuse was what the elder Blake saw as a spendthrift corporate culture taking hold under Smith. In the 40 years Pres Blake ran Friendly, he had never taken home more than $50,000 a year in salary, bonuses and perks. Smith bought a private jet for the company so he could zip between Friendly’s headquarters in Wilbraham, Perkins’ home office in Tennessee, and his residence outside of Chicago. He would later compensate Friendly’s for personal jaunts via the jet.

The elder Blake started acquiring stock in Smith’s company, Friendly Ice Cream Corp., which was public by that time. After spending some $2 million, Pres emerged as the operation’s largest individual shareholder. He then set about getting rid of Smith, starting with a lawsuit and very public complaints about the new CEO’s management style and abilities. He then teamed up with another major shareholder to force a sale of the chain. The squabbling between Pres and Smith would continue at a high volume for three years.

During that time, frosty relations between the Blakes were further chilled by Smith’s successful recruitment of Curtis Blake to align with the ownership team that Pres was trying to unroot. The younger brother faxed a five-page handwritten letter to Pres, imploring him not to push through a sale.

Pres ignored the request, engineering a sale of Friendly’s to Sun Capital Partners in 2007 for $337 million. The Blakes reconciled shortly thereafter.

By then, the chain was already wheezing. Incoming CEO John Maguire found a menu rivaling The Cheesecake Factory’s in breadth and complexity, even though a handful of products generated the bulk of Friendly’s sales. Many stores looked as old as the brand itself, and locations that were “A” sites in the 1960s and ‘70s had aged into “C” markets. Meanwhile, the full-service restaurant sector had charged forward with the emergence of casual dining, and fast-casual upstarts provided stiff competition for convenience and quality-driven patrons.

Friendly’s filed for Chapter 11 bankruptcy protection in 2011, after it had shrunk from a high of 800 to a new watermark of 360. The attrition would continue under a succession of CEOs, with the count dropping to about 130 units at the time of the chain’s second bankruptcy filing earlier this week.

The recent Chapter 11 filing was pre-packaged to enable the brand’s sale for about $1.9 million to Amici Partners Group. The buyer is affiliated with Brix Holdings, the company that owns the Red Mango, Souper Salad and Redbrick Pizza chains. Its detailed plans for the brand have yet to be revealed.