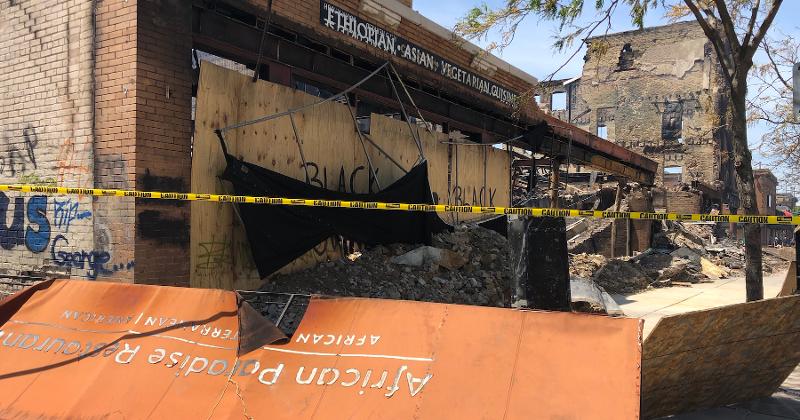 Michelle Durpetti’s grandfather and his business partner opened Gene & Georgetti’s restaurant in Chicago in April of 1941, in a building constructed out of scrap wood from the great Chicago fire. America was at war.

The symbolism of destruction and rebirth that is central to the restaurant’s history is not lost on Durpetti, now a managing partner in the steakhouse still owned by her parents. In October, Gene & Georgetti’s suffered a devastating fire. After six months of repairs, the restaurant was scheduled to reopen on March 26, just as the coronavirus was battering the country. Late Saturday night, vandals did thousands of dollars in destruction there—smashing computer screens, ripping phones from the walls, breaking bottles and more, she said—one of many restaurants around the country damaged this weekend by violence stemming from the death of George Floyd, an African-American man, while under police custody in Minneapolis late last month.

“It’s a triple whammy for us,” she said. “It’s gut wrenching. As an American person, it’s our constitutional right to protest and this is an issue that needs discussion, this systemic racism in our country. But it is no less gut-wrenching as a business owner, after trying so hard to find your footing and a way forward." 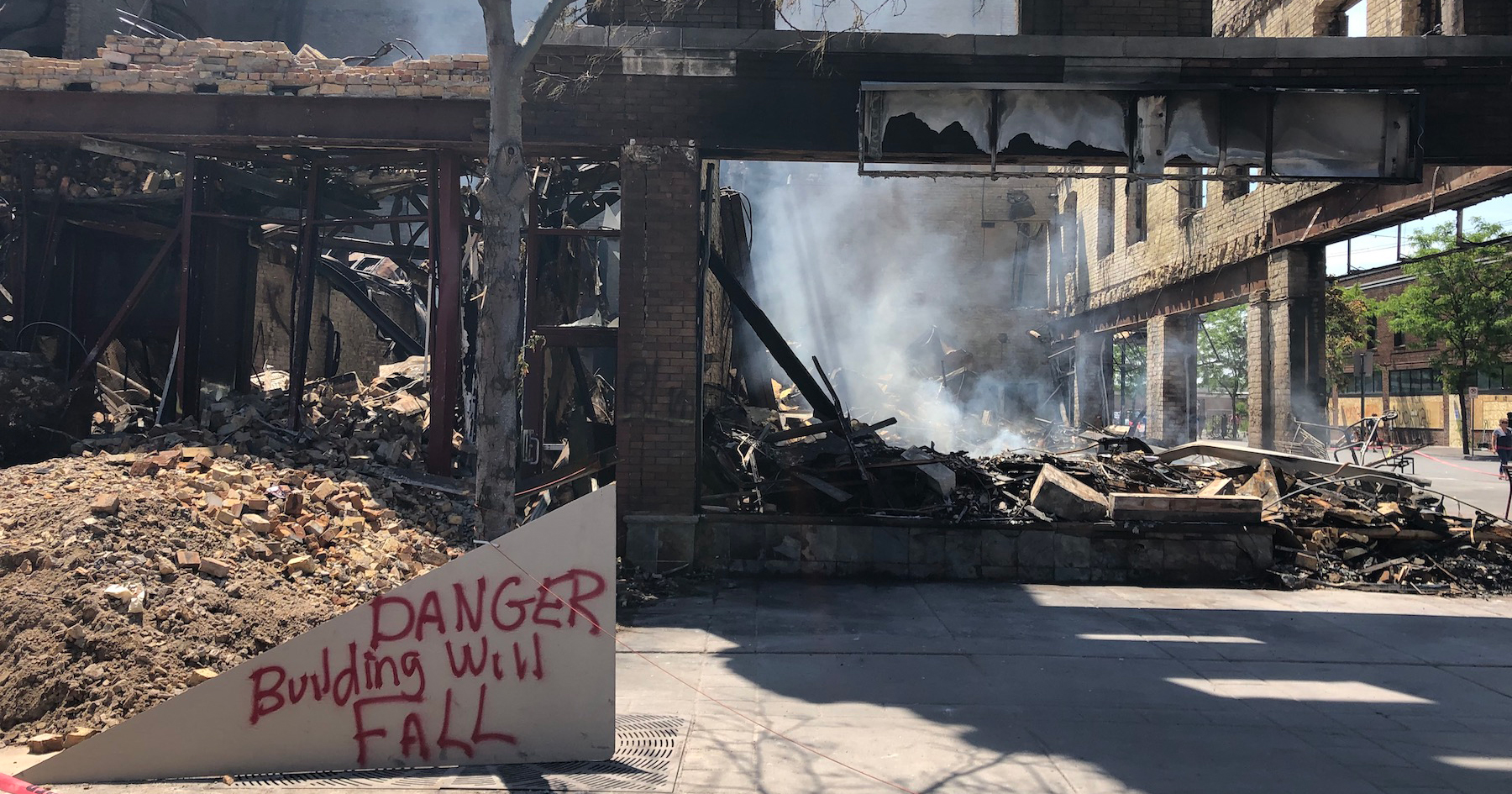 Just as restaurants around the country are reopening for on-premise service amid the coronavirus pandemic, or preparing to do so, many operators are starting the week with another sobering challenge: Repairing the damage from a weekend of looting and violence.

What’s more, many cities have imposed curfews or shut off access to central business districts in an attempt to stem the violence across the nation, making the business environment even more challenging. In Chicago, Mayor Lori Lightfoot said the planned reopening of restaurants for outdoor dining, slated for Wednesday, could be in jeopardy.

Sam Sanchez, owner of Moe’s Cantina and Old Crow Smokehouse in Chicago, said it will take him at least 10 business days to repair the broken windows at his restaurants, erasing days of hard work to prepare for the planned re-opening of outdoor service.

“This is a total kick in the gut,” said Sanchez, who is also the vice chairman of the Illinois Restaurant Association. “People spent a lot of money getting ready to reopen. We worked tirelessly for a week to reopen on Wednesday, to open al fresco. And now our properties are destroyed, our windows are broken.”

Near the University of South Florida in Tampa, looters broke into the Little Greek Fresh Grill location, where they broke a door and windows, opened a safe, took cash from the tip jar and smashed a hammer to the point-of-sale system, said Nick Vojnovic, who owns the restaurant and is also president of the brand.

The restaurant is next to a mall that had served as a gathering spot for protests on Friday night. At 2:30 the next morning, he was awakened by the sound of alarms from the security cameras he has in the restaurant.

Volunteers and his family cleaned the restaurant the next day and covered over the windows with boards saying, “already looted.”

Vojnovic does not know how long it will take to get the restaurant reopened—he expects it could be a couple of days.

Yet it was a sad turn of events for the restaurant, which had just started to pick sales back up lost in the previous months. The restaurant continued to pay workers over the past couple of months and provided 400 meals for the homeless every week and about 1,500 meals to the local hospital.

“What happened in Minneapolis is inexcusable. It’s a crime,” Vojnovic said. “But to take it out on anybody else creates another problem. This was opportunistic people at night who broke into the business to steal money.”

Later, people walked into the restaurant to use the restroom and help themselves to sodas. “You feel violated,” Vojnovic said. “They’re in your house, making themselves at home.”

In Louisville, state police are investigating the death of David McAtee early Monday. McAtee was the African-American owner of a barbecue restaurant who was killed after an incident in which city police and National Guard troops were breaking up a large crowd gathered near his establishment.

In Texas, the state’s restaurant association announced that it is extending financial support through the TX Restaurant Relief fund to independent restaurants damaged by vandalism, looting and rioting. The fund had been set up to stem restaurant losses due to the pandemic.

In Minneapolis, where the protests began, daylight Sunday revealed the destruction from nights of riots along the city’s Lake Street corridor.

The area near the city’s Third Precinct police station, which served as ground zero for protests that have since spread around the world, includes numerous local and a few chain restaurants. 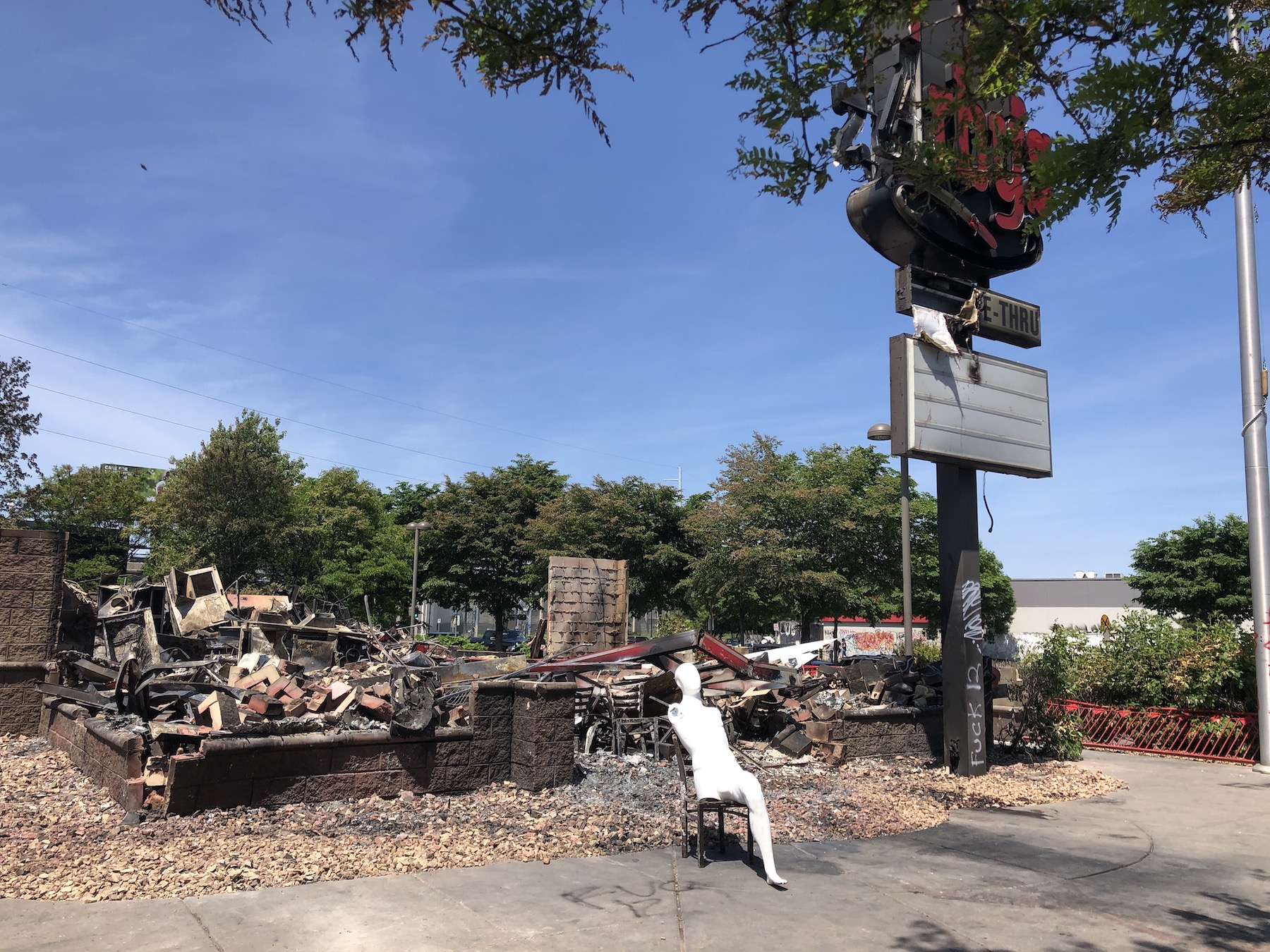 One block from the station, an Arby’s lay in ruins, with only the sign above providing any indication of what the building once was.

Three blocks away, a historic building is a burned-out shell. That building housed several restaurants, including the Town Talk Diner gastropub, Ethiopian restaurant Addis Ababa and El Nuevo Rodeo, the Latin nightclub where both Floyd and the police officer charged with his murder, Derek Chauvin, both reportedly worked.

Next door, the Gandhi Mahal lay in ruins. The owner of the Bangladeshi/Indian restaurant last week declared, “let my building burn,” saying something needed to change to stop police brutality.

Across Lake Street, little is left of Mama Safia’s Kitchen, a Somali restaurant that was just opened two years earlier by a 66-year-old Somali immigrant who opted not to retire and instead used her life savings on the restaurant.

It had been closed since March due to the pandemic. Now it’s in ruins. “I can always rebuild but we can never get George back,” she said, according to a GoFundMe page set up by her daughters. It has raised just over $100,000 of its $150,000 goal thus far.