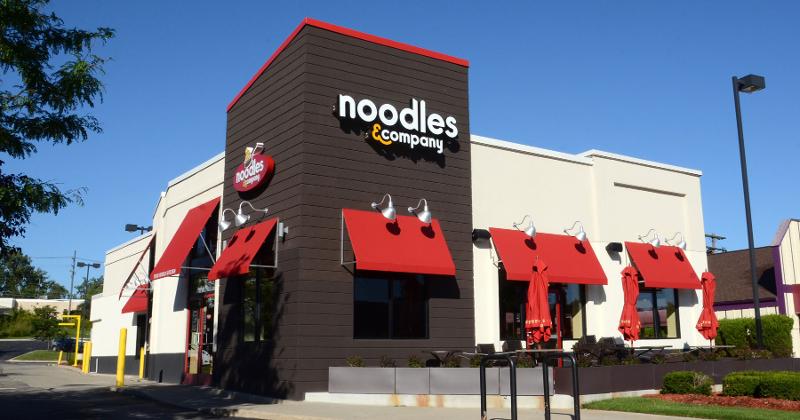 Noodles & Co., which in February had said it was ready for a return to “strong unit expansion,” revealed Wednesday that sales have fallen more than 46% systemwide due to the coronavirus and that it has furloughed some of its workforce.

Preliminary sales results for the quarter ended March 31 showed that same-store sales at the fast-casual chain were up 7.5% for the four weeks of the quarter that ended Feb. 25. And comps remained up 4.6% for the first two weeks of March.

But sales took a nosedive from March 11 to March 31, when systemwide same-store sales fell 46.3%. For the quarter, sales fell 7.2% overall.

About 10% of central support office staff have been furloughed, with an additional 20% reduced to half time, and salary reductions were implemented across all executives and central office staff not subject to other restrictions.

The company has suspended all new unit development, slashing its planned capital expenditures for the fiscal year to between $7 million and $10 million, down from previous expectations of $20 million to $30 million.

Like others during this time, Broomfield, Colo.-based Noodles is trying to keep its franchisees in business by deferring some royalties, along with IT support and marketing fees.

Noodles borrowed $47 million under its revolving credit during Q1, leaving it with a cash balance of about $50.2 million as of March 31. It drew down an additional $8.5 million during the first week of the second quarter and currently has about $58 million in cash on hand and long-term debt of $95.9 million.

The chain has more than 450 units, with 97% of company units and 94% of its franchise locations currently operating for takeout, curbside pickup and delivery.

Noodles is scheduled to release its full Q1 earnings on May 6.

Wawa is building a drive-thru unit