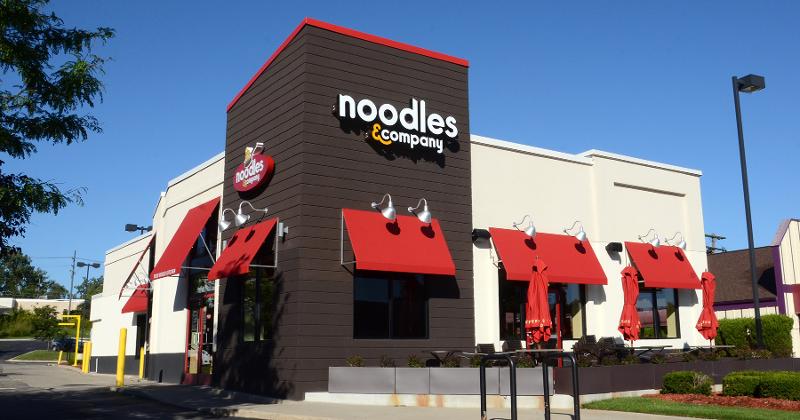 After closing dozens of stores in recent years, Noodles & Co. executives said Wednesday that the fast-casual chain is once again in growth mode.

The Broomfield, Colo.-based brand is planning 5% unit growth systemwide, starting next year, with the potential to bump up to 7% annual unit growth in the future.

This year, the chain is on track to add 10 to 15 new stores, with a move toward more aggressive franchise expansion. Noodles recently refranchised nine restaurants in Charlotte, N.C., and Orlando, Fla., to an existing franchisee, under an agreement that also includes franchisee River City Restaurant Group opening at least 22 additional restaurants over the next several years.

The chain’s expansion plans came during its announcement of its seventh consecutive quarter of comparable sales growth. Same-store sales increased 2.8% systemwide for Noodles for the quarter ended Dec. 31, with total revenue increasing 0.6% to $113.9 million.

Through Tuesday, same-store sales at Noodles have grown 5.7% systemwide year to date.

For Q4, digital sales increased 34% year over year and accounted for a quarter of all sales.

“We believe we are only scratching the surface of our potential,” CEO Dave Boennighausen told analysts. “During 2020, we will continue to evolve our quick pickup and digital ordering channel experiences. As those evolve, we are also focused on building our rewards program membership and developing the digital and data pools to optimize our guest engagement activities.”

The chain plans to relaunch its catering menu and is at work on new menu items.

Much of Noodles’ recent success can be pinned on health-focused new menu items, including zucchini noodles and cauliflower-infused pasta.

“We are in the process of testing additional introductions and innovation around plant-based noodle alternatives,” Boennighausen said. “I will say that we’re a little bit early on (in their development) … One of the challenges that we had a handful of years ago is when the menu did get too complex. So it is something we are very, very laser-focused on making sure that we balance innovation with operational execution.”