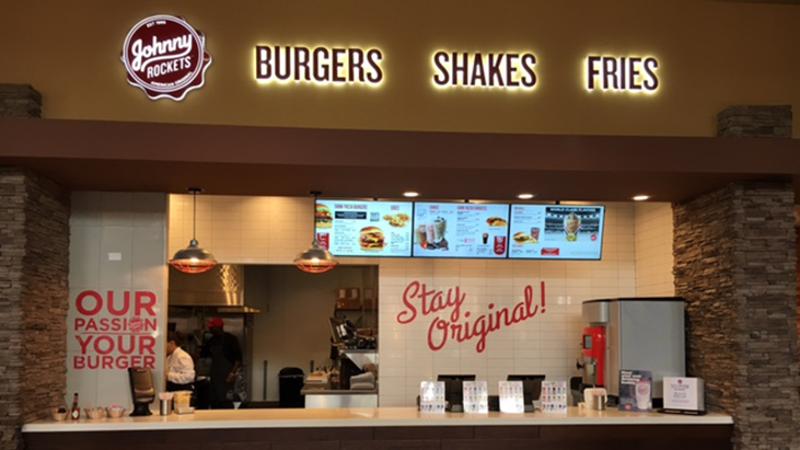 Shrinking a restaurant’s footprint not only can lead to cost savings in rent, it also can create opportunities in high-traffic albeit pricey markets and small-concept ventures such as food halls and airports. But in the interest of preserving precious seats, the back of the house often gets squeezed. As storage space contracts, chains are getting resourceful with everything from shelves to ceiling height and inventory.

“When we were first tasked with figuring out smaller footprints, when it came to interiors, it was like a bad riddle,” says Trinity Hall, vice president of development for Dallas-based Dickey’s Barbecue Pit, which shrunk its prototype from 2,200 square feet to 1,800. “Let’s make it smaller and not lose a single chair in the dining room.”

Hall turned her design conundrum into an exercise in streamlining, spending hours monitoring areas for improvement. “Watching every piece of our day-to-day operations, I saw wasted space, wasted inventory, workstations not being utilized properly—lots of areas where we could be more efficient,” she says.

The chain cut back on inventory, only ordering what was needed in a given week and reconfiguring shelving accordingly. Shelves above the prep table were resized for one week’s worth of product, while custom shelves added under POS systems were fitted with cubbies for single boxes. To make sure all measurements lined up, Dickey’s held a live vendor simulation: A vendor dropped off a week’s worth of inventory, and the team stocked every shelf and cubby to ensure the dimensions of the trimmed-down space worked.

“It became so much bigger than looking at storage,” Hall says. The need to find efficiencies expanded to the chain’s tendency to over-order inventory, waste space and even misuse work stations.

Burger chain Johnny Rockets thought vertically when building its smaller 1,000-square-foot Express units. Back-of-house ceilings were raised to 10 feet from the typical 8, says VP of Development Dominic Talavera. “It’s more expensive to finish that high, but it gave us a much-needed extra row of stainless steel shelving— plus we were able to utilize the area above the walk-in cooler for dry storage once we fireproofed it,” he says.

Del Frisco’s Grille similarly capitalized on vertical space in its prototype that is 1,200-square feet smaller than its typical restaurants (launching next year), carving out a mezzanine level for liquor storage, employee lockers and a manager’s office. But losing square footage required sacrifices, too. Del Frisco’s decision to part with half of its 1,500-bottle wine display is partly responsible for the new build-out fitting more seats than its 8,400-square-foot counterparts.

“When we opened in 2011, we wanted to differentiate ourselves with an extensive wine selection, but we realized we can still offer a competitive advantage with 600 to 700 bottles,” says Bill Martens, VP of development for Del Frisco’s. “We saved on the build-out, freed up space for seating and were able to go with a more contemporary racking system.”

Switching to smaller square footage doesn’t mean fewer guests—something Dickey’s has had to convince its franchisees of. “The biggest piece is getting [franchisees] to understand that we’re not taking anything away—just doing it in a different way,” Hall says. “We’ve had nothing but rave reviews from people ready to build a second or third store with a smaller footprint, knowing they won’t lose a single seat.”