Courtney Brown, owner of Irish Legend Taproom & Restaurant near Chicago, already lost her biggest sales day of the year, St. Patrick’s Day, due to the earliest days of the coronavirus shutdown.

Brown, whose establishment is widely considered to be haunted, wasn’t about to let the pandemic derail her Halloween plans—despite the Illinois governor’s recent order to shut down dining rooms amid surging COVID rates.

So, she’s running ghost tours on her property this weekend, limited to groups of 25 who will explore the pub’s creepy attic and basement. A DJ was slated to be stationed in a tent outside for Halloween festivities, with a costume contest, too.

Brown, who has owned the restaurant for two-and-a-half years and has 16 employees, said her decision to remain open for dine-in service was based on safety, namely keeping her workers in good financial health.

“At the end of the day, if I can’t make my mortgage, I’ll figure it out,” she said. “I’m worried about my girls who are 25-years-old, just bought a house and have a 2-year-old. That’s who I’m worried about.” 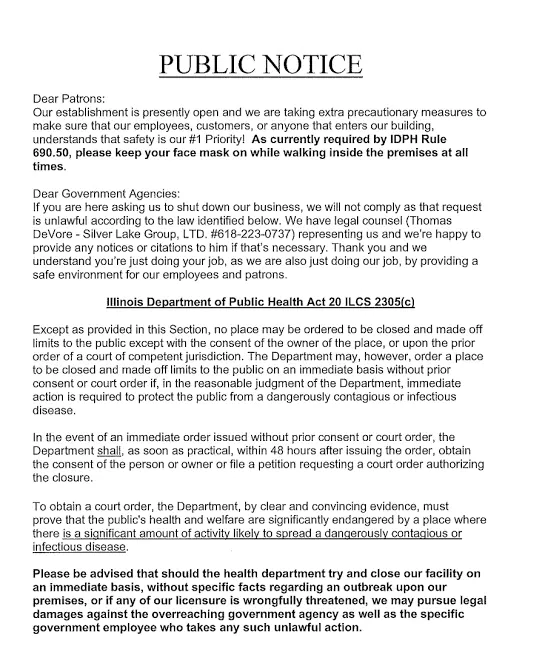 Clamping down on dine-in

With coronavirus cases climbing through much of the state, Illinois Gov. J.B. Pritzker has ordered the suspension of dine-in service across nearly every region.

Pritzker’s order makes Illinois one of the most restrictive states for restaurants and bars, though others have recently followed suit. Dine-in service was suspended in Newark, N.J., on Wednesday and Denver rolled back its dining room capacities to just 25%. With the pandemic surging across much of the country, it is likely more cities and states will move to shut down on-premise restaurant and bar service, just as they did at the beginning of the crisis.

Some restaurant operators are fighting back.

The Illinois Restaurant Association called on Pritzker this week to reverse his decision. In an open letter, the IRA asked the state to modify the mitigation plan to allow for limited dine-in operations statewide, saying the state’s restaurants “will not survive another complete shutdown of indoor service.”

More than 6,500 people and counting, most of them restaurant operators or customers, are members of the newly created Stay Strong Stay Open Illinois private Facebook group, with a mission to support “Illinois restaurants staying open despite ‘orders’.”

The owners of the FoxFire restaurant in Geneva, Ill., filed suit against Pritzker, as well as area health departments, saying the governor does not have the authority to suspend dine-in service. A Kane County judge grated the restaurant a temporary restraining order early last week, allowing it to keep its doors open.

North Side Sports Bar & Grill in Glen Ellyn, Ill., promoted a new sandwich “in honor” of the state’s governor: The Dictator features barbecued pulled pork on brioche with onion straws and pickles. It is available for dine-in only. 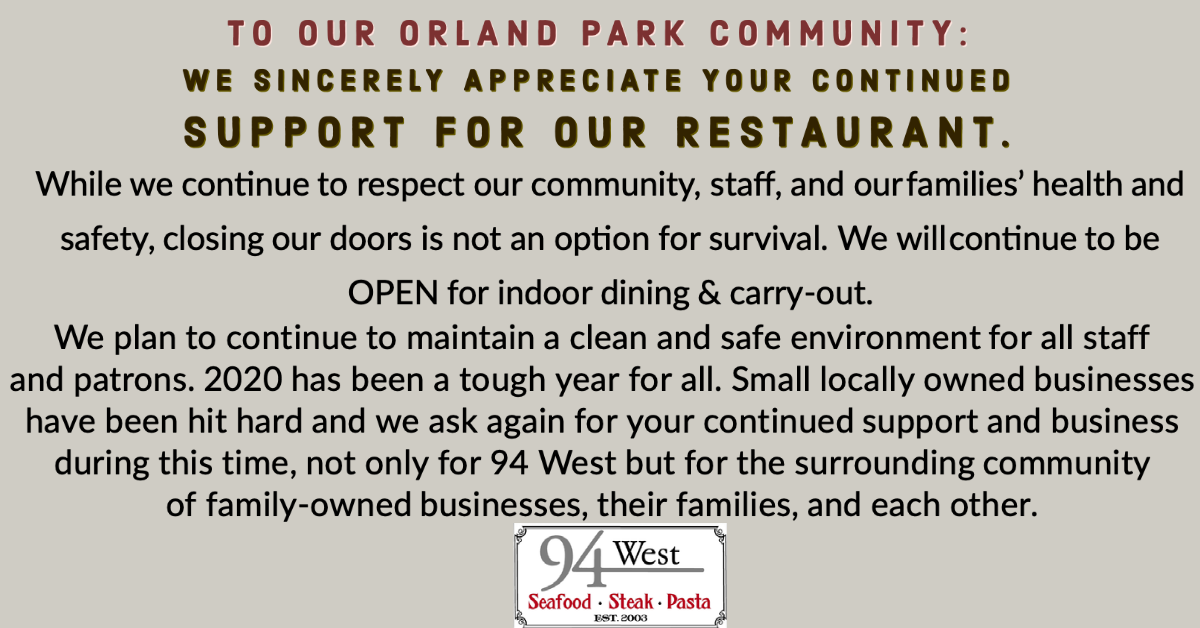 ‘Moving and heartwarming’ show of support

When Spiro Roumpas, the owner of Ki’s Steak and Seafood in Glendale Heights, Ill., decided to defy the governor’s orders, he never expected the response he would receive.

Roumpas, whose father bought the restaurant in 1980, agonized about whether to keep his dining room open but ultimately decided he was in a lose-lose situation, he said.

He started thinking about his 40 employees and their families and the restaurant’s loyal customers.

“The response has been unbelievable,” he said of his business since announcing he’s staying open. “Never in my wildest imagination could I imagine what has happened. It has been truly heartwarming and amazing.”

Business last weekend was “like a holiday,” he said. “It was like New Year’s Eve, from open to close.”

“We aren’t doing this to go against the government or start a fight with the governor,” Roumpas said. “I’m just a little fish in a big pond. We weren’t trying to do this to be rebels or renegades. All we were just doing this out of survival.”

Go to the website or up to the door of Stanley’s Ale House in South Elgin, Ill., and you’ll see a strongly worded public notice, stating that the restaurant is staying open, that it has obtained legal counsel and that it will not comply with being shut down by any government agency.

Scott Stanley, who has owned the sports bar for nearly a decade and has lived in the town his whole life, said he got a raft of “really nasty, personal messages” sent to him on social media once he announced his decision.

“I’m the son of a truck driver and I’ve heard some language” Stanley said.

Some said he was more worried about profits than the public health and that he would be killing grandmothers with his push to keep his dining room open.

“Yesterday, the majority of my customers were senior citizens,” he said. “They were so happy they could come out to eat. They were just happy we were there.”

So now, as the biggest restaurant in town, he’s ramping up marketing for the holiday season. He’s pitching his 90-person banquet rooms for parties of 25 or 30 people.

“All the restaurant owners need to stick together,” he said.

Of course, not all restaurant owners support continuing dine-in service in defiance of government orders.

Throughout the pandemic, many have suffered the effects of following the rules and have found new sources of revenue such as takeout and delivery, meal kits, to-go cocktails and more.

“Some restaurants are and will be choosing to defy state orders … but that will not be our approach,” George Karzas, owner of Chicago’s Gale Street Inn, posted on Facebook Thursday, noting that the restaurant has invested in UVC technology and upgraded HVAC filters. “The high road is in front of us and we will be taking it … Our goal over the next weeks and months towards an inevitable reopen, and beyond, is to be the first restaurant you eat at once you feel it’s right. You can count on us being here, waiting for your return, and doing it right.”