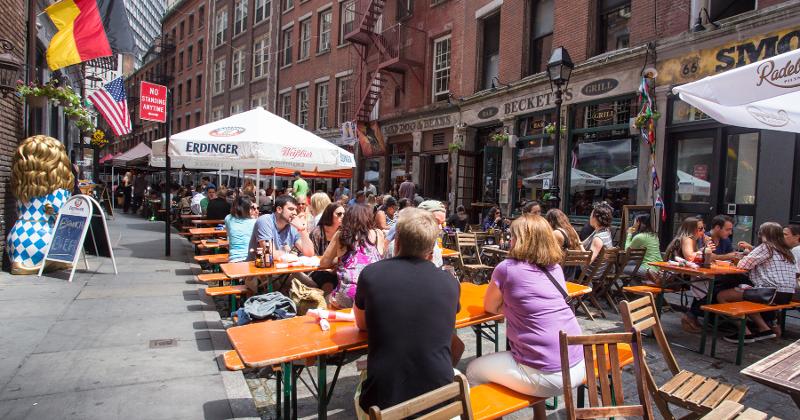 When Milwaukee Mayor Tom Barrett abruptly announced that bars and restaurants could reopen their dining rooms Friday, with less than 24 hours notice, operators’ reactions ranged from relief to anger. But almost everyone would agree they were surprised.

“It’s a little shocking,” said Dennis Radtke, CEO of Harp & Eagle hospitality group, on Friday. “I think the city could have handled it a little better by giving some notice a couple of days ago.”

“We’re happy that they’ve come to this conclusion and that they’ve started this process so that we can make some revenue,” Radtke said.

In addition to Milwaukee, restaurants in New York state and Los Angeles County have been caught off guard recently when government officials said they could reopen with little warning.

New York Gov. Andrew Cuomo on Wednesday said restaurants would now be included in Phase 2 of the state’s reopening plan. That meant that restaurants in seven regions could reopen outdoor dining the next day.

It was a move that Melissa Fleischut, president and CEO of the New York State Restaurant Association, had been advocating for.

“Folks were pleased with the announcement, but, again, kind of thrown by how quickly it came together,” she said.

Some form of on-premise service has resumed in every state except New Jersey. For many operators, that revenue, no matter how small, could be the difference between staying open or shutting down for good.

In Milwaukee, a group of bars and restaurants had circulated a petition calling on Barrett to lift dine-in restrictions. If he didn’t, the petition said, they’d open anyway, starting today. It had more than 8,000 signatures when the mayor made his announcement.

Radtke said his business was not part of the group behind the petition, but that he understood their frustration. “Some restaurant owners are basically at the end, and they cannot withstand another week. So it’s open or close for good. … They’ve got nothing to lose.”

But some Milwaukee restaurateurs were angered by the sudden change. A.J. Dixon, chef-owner of Lazy Susan restaurant, criticized the city’s lack of concrete regulations around dine-in, saying guidelines are not enough. She said she had been working to schedule a meeting with Barrett to discuss the issue.

“We want people to be safe,” she said. “I don’t want to have to close again just because stuff happens.”

Barrett said the decision came because the city had hit some key benchmarks of its reopening plan, but warned that “cases are still appearing” and that he was “counting on business owners to make smart decisions.”

Dixon said she thought the petition had something to do with the mayor’s decision. But she and other local restaurateurs felt the move was mainly intended to draw attention away from protests against police violence that have been happening in Milwaukee and around the country.

She said she probably won’t open until August.

“I’m gonna sit and ride this out for as long as I can. I want people to enjoy my restaurants. Twenty-five percent [capacity], that’s like seven people in my restaurant. Even at 50%, it would be hard,” she said.

In New York, the general response from restaurants seemed more optimistic. Fleischut said “Every little bit helps” when it comes to lifting restrictions.

“This has given an attitude lift if you will,” she said. “It’s almost a feeling that maybe the worst is behind us.”