A sandwich for a buck? Meh. Consumers can find that anywhere.But a cocktail for the same dollar? That’s like lobbing a halibut into a shark tank, as Applebee’s has learned with its deeply discounted drink specials, a key part of the casual-dining leader’s turnaround. The rotating deals started with the Dollarita, a margarita selling for four quarters back in 2017, and have since expanded to include Dollar Zombies (a tribute to “The Walking Dead”), $1 Bahama Mamas and the Dollar Jolly (which tastes like a Jolly Rancher). Those successes cleared the way for $2 offerings, including Captain and Colas and the current offering, Absolut Rainbow Punch. 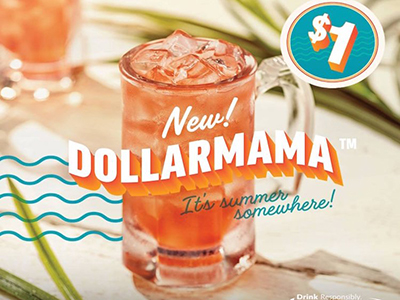 The mixology snobs who make their own bitters might sneer at such mass-market come-ons, but the bar bait is helping Applebee’s draw dine-in customers, the high-profit prize at a time when most of the sales growth for full-service operations is coming from delivery and takeout.

The overseer of that effort is Yashinsky, though he’s quick to point out that Applebee’s has used crowdsourcing to decide what’s next in its booze-for-a-buck-or-two lineup.