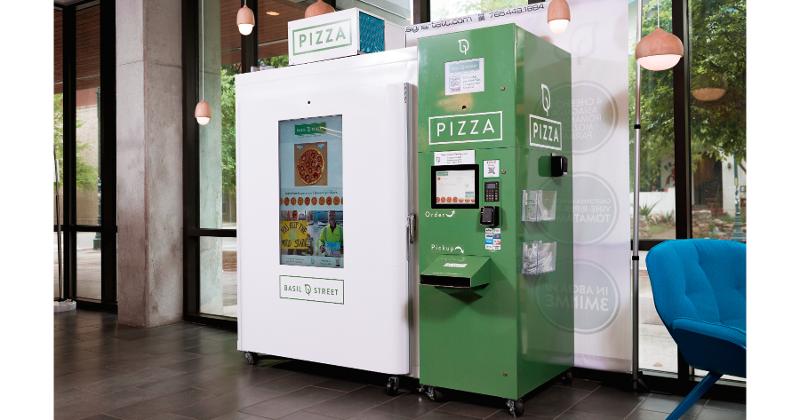 One of the defining characteristics of Basil Street's pizza vending machine is speed.

The automated system can cook a variety of frozen, 10-inch pies in about three minutes. And the company is charting a growth plan for 2021 that is similarly rapid: It will be in 50 locations this fall, and as many as 100 by the end of the year.

That said, Basil Street took its time getting to this point. Five years after its founding, it is finally ready to expand in earnest, capping a journey that founder and CEO Deglin Kenealy said he never envisioned would take this long.

Fundraising was the first step back in 2016 for the Los Angeles-based company, which saw an opportunity for automation in the enormous pizza market. It chose the slower route of raising money from friends and family rather than venture capital firms, Kenealy said, and by February of 2019, it had developed its first prototype. Then, it began the time-consuming process of getting its product certified with NSF and Underwriter Laboratories before it could begin manufacturing en masse. The two standard-bearers for product safety put Basil Street under a microscope, running tests as minute as opening and closing a freezer door 100,000 times to make sure the hinges worked.

"This process is hard and it’s really expensive and it takes a very long time," Kenealy said. But acquiring the NSF and UL stamps is a big differentiator for Basil Street as it eyes airports, hospitals and other high-traffic areas for growth.

"I believe that we are potentially the only, or at the very least one of the only, hot food vending companies that actually has achieved this status," he said.

The company's 22-square-foot "automated pizza kitchens" are designed to replicate the brick-oven process in which the pie sits directly on the oven floor, resulting in a crisp and even bake. Toppings are cooked with radiant convection heat, and pizzas are also hit with blasts of impinged air to ensure ingredients like tomato chunks don't come out half-frozen. The process varies depending on the pizza, with consistency being the intended result.

"Every type of pizza should really be cooked differently … and that’s the thing that robotic technology allows you to do," Kenealy said.

Ordering and payment is contactless. Customers scan a QR code with their phone, pick their pizza, pay, and wait for the pie to pop out. The Italian-style, thin crust pizzas cost between $4.95 and $14.95, and include staples such as four-cheese, pepperoni and supreme along with rotating monthly specials.

Leading up to its impending expansion, Basil Street tested five units in California, Texas, North Carolina and Nevada. That helped it identify some technical issues, such as the need for a more powerful freezer and different cooking profiles that take into account variables such as altitude.

It learned some things about its customers as well. A breakfast pizza topped with scrambled eggs, bacon, sausage and peppers was a hit, as was a Buffalo chicken pizza. And users in so-called "closed locations," like the office of a big military contractor in Southern California, preferred a menu that changed frequently. "You can’t just offer cheese, pepperoni and supreme" in settings where people visit the machine every day, Kenealy said.

As it fans out across the country this year, Basil Street will put its units in a variety of environments to see what works best. Those will include factories, hospitals, airports, universities and corporate offices, each of which has a unique customer base.

"Finding locations is not hard," Kenealy said. "Everybody likes this idea." Some investors have even asked if they can have one in their home. (The answer is yes, if they are willing to eat 10-15 pizzas a day, Kenealy said.)

The company doesn't plan to license its technology in the U.S. anytime soon, although it will likely take that approach overseas, Kenealy said. And he hinted at the possibility of expanding the menu beyond pizza.

"This technology and this oven that we have, we can cook virtually everything," he said, including cookies, pretzels and quesadillas.

To fuel its growth, Basil Street is launching a Series B round on the crowdfunding site SeedInvest. It hopes to raise $20 million that way, adding to a $10 million funding round in April 2020.