At first glance, Sapah Shah’s Subway franchise in Allentown, Penn., looks like any other. So why have people been driving hundreds of miles to buy his sandwiches? 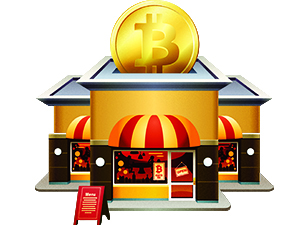 The answer is taped to the window. A sign reads, “Bitcoin accepted here.”

In November, when Shah first let customers pay with the controversial cybercurrency, “It sort of went viral,” he says.

He’s one of a handful of restaurant owners nationwide who have started accepting bitcoins. The virtual currency was launched in 2009 by an anonymous programmer or programmers, largely as a means of bypassing banks. Bitcoins aren’t backed by anything but the willingness of other users to take them, and their values are volatile. Over the past six months, the exchange rate to the dollar has seesawed from $1,151 to $443.

Bitcoins also have been shadowed by their use for black-market drug transactions and by the February collapse of the world’s largest bitcoin exchange, after it lost $460 million from its customers’ accounts.

All that is of little concern to Giuseppe Lanzone, co-owner of the Peruvian Brothers food truck in Washington, D.C. For him, bitcoins are simply another option for customers to pay, alongside Visa and Mastercard. “If you forget your wallet, and you have only your phone, you can pay with bitcoins,” he says.

He doesn’t worry about instability, because he uses a payment-processing firm that converts bitcoins immediately to dollars within seconds. When Lanzone rings up a bill, it generates a QR code, which the customer scans into his phone. The appropriate amount is automatically withdrawn from the customer’s digital bitcoin account and deposited directly into Lanzone’s bank account.

For Lanzone, an added attraction is that the fee costs him 1 percent of the sale, compared to the 2.75 percent he pays on credit cards.

So far, bitcoins aren’t booming for either restaurant. Lanzone counts two dozen transactions, while Shah has settled down to a couple a week. But both foresee payoffs ahead, as the currency creeps from the computer underground into mainstream commerce. Some $8 billion worth of bitcoins currently are in circulation, and one payment processor—which, like its chief competitor, claims to handle more than 30,000 businesses—expects to process more than $200 million in payments this year.

“It’s not going to replace Visa or Mastercard in the immediate future,” concedes Shah. “Most people ... have no clue what it is.” But for customers who know, he sells a few sandwiches he might not otherwise have sold. “There’s no downside to it. It’s simply an addition to our existing merchant services,” he says.