Cali Group, parent company of high-tech burger concept CaliBurger, announced today it has secured $10 million in funding to fuel research and development of Flippy, its burger-flipping robot, and other robotic foodservice innovations.

The majority of the funding for Cali Group-owned Miso Robotics comes from Acacia Research Corporation, a frequent investor in disruptive technologies. Other contributors to the Series B financing round are the Levy restaurant-hospitality group and OpenTable’s chief technology officer.

Flippy has undergone a year of laboratory testing and, for the last six months, has operated behind a curtain at CaliBurger’s Pasadena, Calif., unit.

“It will begin cooking for the public within a couple of weeks,” Cali Group CEO John Miller says. “We’ve been training it very similarly to how self-driving cars are trained now. They learn over time, with experience and data.”

The company hopes to have the robot flipping burgers in all 10 of its domestic units by the end of 2018, using its CaliBurger stores as test concepts to prove Flippy’s usefulness before attempting to sell the software to other operators. 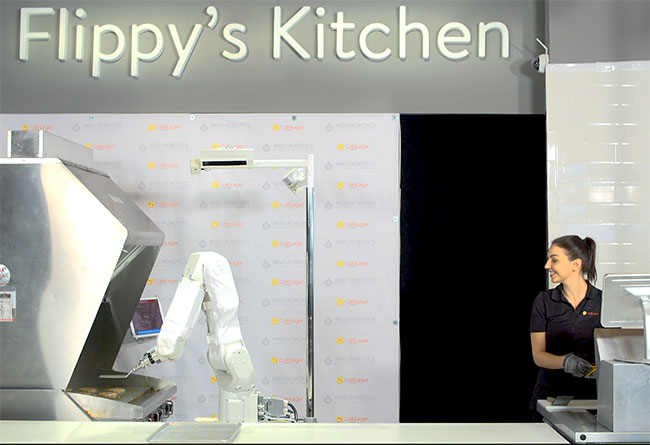 “We think of ourselves as a technology company, more than a food company—at least at the Cali Group level,” Miller says. “It’s hard to get people to adopt (new technology). They don’t want to take risks. It’s hard to change operations … (But) we have our own restaurant chain to deploy it right away.”

CaliBurger plans to redeploy any labor saved by the burger-flipping robot into the dining room, to provide more customer interaction. Miller says the robots will speed throughput as well as provide entertainment value. In the future, he expects Flippy will also have sensors to detect foodborne pathogens. 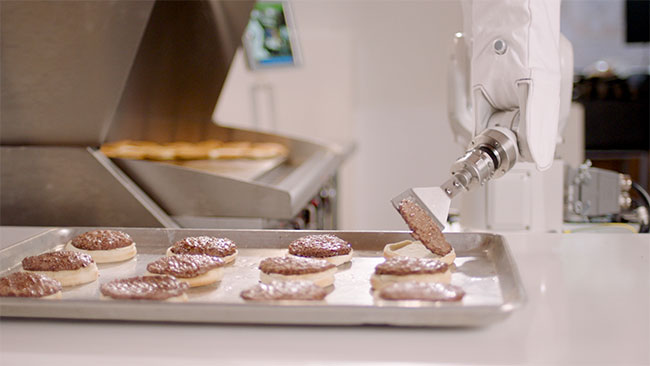 It is unclear how Flippy’s payment model will look when and if other operators adopt it, Miller says. Operators could either buy the machine and pay a monthly fee for upkeep and software updates, or they could rent it by the hour, much like one would pay an hourly line cook. “It’s not fully settled which business model makes the most sense,” Miller says.

Flippy is not the only disruptive technology being tested at CaliBurger—the chain’s Pasadena unit is also trying out facial-recognition payment. The brand is still collecting data on the speed and convenience of the payment option, he says, before rolling it out to other units or offering it to other operators. Miller is hopeful that a face-based payment system will eventually lower credit card processing fees for operators by reducing the chance of fraud.

Cali Group also hopes to launch an app, called C-Vision, by the end of the year that will roll all restaurant operations into one. It will use artificial intelligence to do predictive labor scheduling and food ordering, based on expected volume, Miller says, as well as tie in kitchen system sensors, point of sale, social media, third-party delivery, weather patterns and more.

“A person from 100 years ago could walk into a restaurant today and know what to do because so little has changed,” he says.

Cali Group is also a majority investor in Kitchen United, a startup focused on delivery innovation for the restaurant industry. The company opened a 12,000-square-foot culinary innovation center earlier this month in Pasadena to experiment with automation, POS software and back-of-house efficiencies to solve common off-premise pain points.