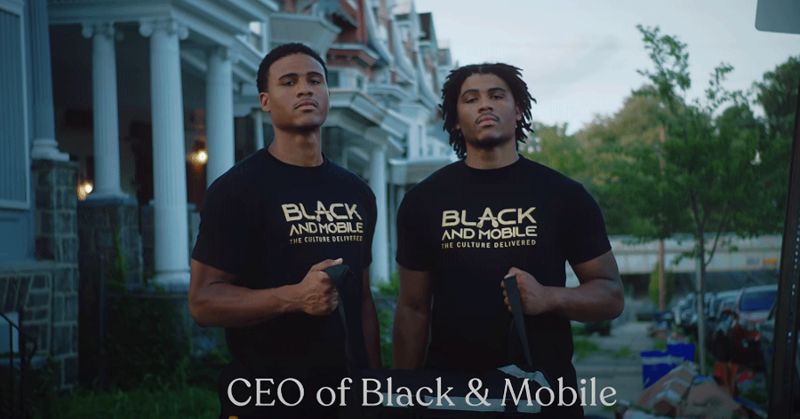 When David Cabello was delivering food on his bicycle, splitting accounts at various third-party delivery providers with his identical twin brother, he learned some things.

First, he was eventually able to make pretty good money doing it. He worked his way from Postmates to Uber Eats and finally to Caviar, where he was earning about $1,100 for 30 hours of pedaling food around Philadelphia.

He also noticed that very few of those orders were coming from Black-owned restaurants.

“I could count on one hand the amount of times I picked up food from a Black-owned restaurant,” Cabello said.

With those lessons in mind, combined with his self-taught knowledge of Shopify and app building, Cabello began thinking about starting his own food delivery business.

“I could just do my own thing, but I could cater to only Black-owned restaurants that are underrepresented,” he said.

So in February 2019, he launched Black and Mobile, with the goal of bringing those restaurants more exposure and delivery access. It is now available in Atlanta, Baltimore, Detroit and Philadelphia and has partnerships with around 120 restaurants and a network of 300 drivers.

The company’s story so far has been one of ups and downs. While the pandemic and racial unrest following the deaths of George Floyd, Breonna Taylor and other Black people over the summer ultimately helped bring more attention to Black and Mobile’s business, it also took an emotional toll.

“It sucks that we have to be murdered for us to get support from people,” Cabello said.

However, some of the issues Black and Mobile faced have been internal: The company was plagued by tech problems last year that prevented customers from ordering at times, costing it $300,000 and partnerships with some restaurants.

It has since overhauled its tech team with the help of an investment from Pepsi, part of the food giant’s $50 million Dig In initiative to support Black-owned businesses. It is also working with software provider Onfleet to manage and optimize deliveries. Those upgrades have amounted to a “fresh start” for Black and Mobile, which has a goal of hitting $1 million in revenue this year, Cabello said.

“It’s about more economic growth and keeping the money within your community and servicing the community,” she said. While the major platforms did work to highlight Black-owned restaurants after the summer’s unrest and during Black History Month, that kind of support has been a constant with Black and Mobile, she said.

“They are constantly highlighting the restaurants that they service, which I love about them,” Wiggins said.

Shugar Shack has worked with the service since November, and it now handles about 30% of its delivery orders. The restaurant also uses Uber Eats, Grubhub and DoorDash.

“Per mile, we usually pay the best,” Cabello said, because as a smaller company, “the only way they work for us is if we pay them more.”

Most Black and Mobile restaurants work with other providers as well, Cabello said, but he doesn’t view the big guys as competition right now.

“We’re not trying to take anyone out of business,” he said. He’s more focused on keeping his customers happy until the network grows large enough that exclusive partnerships make sense.

Though it’s still small, Black and Mobile has made a noticeable impact for its partners, Cabello said. Some restaurants have seen a three- or fourfold increase in orders since joining the platform, he said, and have had customers tell them they heard about the restaurant on Black & Mobile.

“We’re just trying to make sure the money and love is spread throughout every business,” he said.