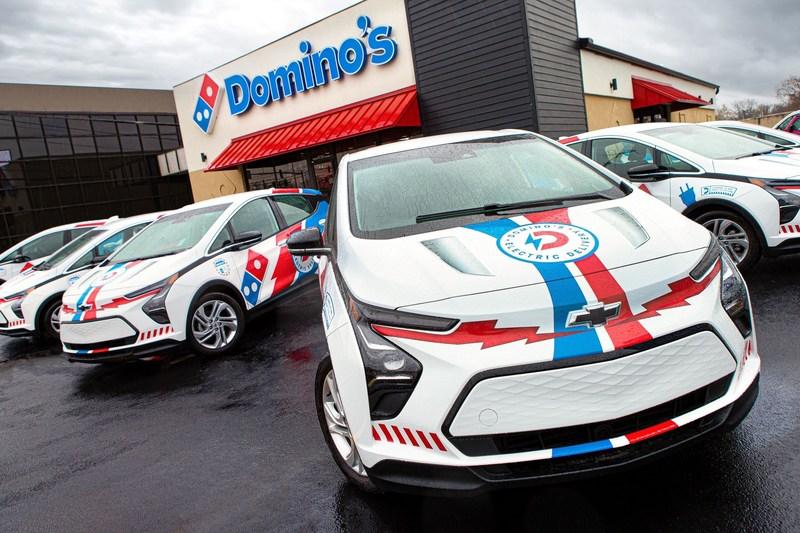 Domino's is rolling out a fleet of 800 Chevy Bolt electric vehicles to stores across the U.S. / Photo courtesy of Domino's Pizza.

The Ann Arbor, Mich.-based pizza chain on Monday said that it would roll out what it says is the nation’s largest fleet of electric pizza delivery vehicles. The company will send 800 Chevy Bolt EVs to select franchise and corporate stores around the country.

The fleet will be located in each state. The company is working with Enterprise Fleet Management, which will work on account management, vehicle acquisition and financing, telematics and maintenance.

It will also give the company an advantage in the ongoing war for drivers: The ability to attract those who don’t have a car of their own.

“Domino’s has been on the cutting edge of pizza delivery and electric delivery cars make sense as vehicle technology continues to evolve,” CEO Russell Weiner said in a statement. He noted that Domino’s has committed to net-zero carbon emissions by 2050, and this can help accomplish that goal.

The EV fleet makes practical sense, too. Electric cars do not need regular oil changes, for instance, and they do not need to be filled with gas. The EVs have lower average maintenance costs than nonelectric cars. Domino’s said that the Chevy Bolts have enough battery life for “days of deliveries,” with a 259-mile range.

Domino’s already delivers with electric bikes or scooters in 24 international markets, including the U.S.

For the pizza chain, the vehicles could theoretically help ease its driver shortage by making the company more attractive to drivers, whether they own a car or not. The company has struggled with a driver shortage for the past year, one that has limited hours of operation of many locations and hurt sales. Same-store sales for delivery declined 7.5% last quarter, which Domino’s blamed on the economy.

There are already 100 of the electric vehicles in operation and Domino's is planning to send out another 700. The company even has an interactive map where customers can see where the fleet is in use and how many cars are coming.

To mark the occasion, Domino’s is giving customers the chance to win one of two 2023 Chevy Bolts. Customers who order delivery online between Nov. 21 and Feb. 12 will be automatically entered for a chance to win. Customers who share why they’re Domino’s biggest fan on TikTok or Instagram will also be entered into the contest.

UPDATE: This story has been corrected to fix the name of the cars Domino's is buying.