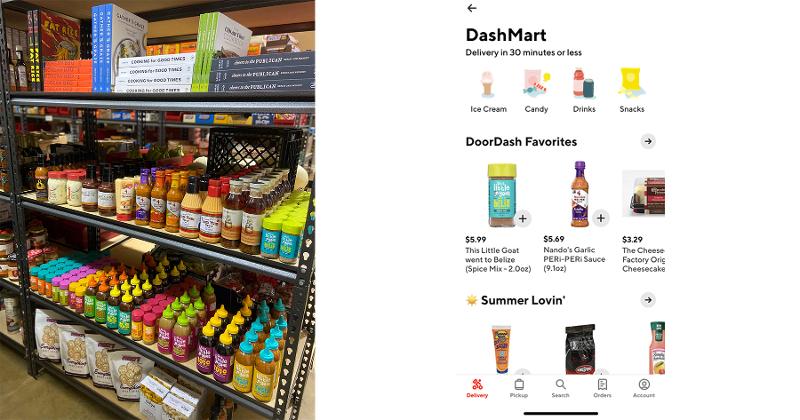 DoorDash has launched a new channel that allows restaurants to offer retail products for delivery alongside grocery, convenience and household items, providing a potential additional revenue stream for restaurants during the pandemic.

DashMart, touted as “a new type of convenience store,” will offer thousands of products, including ice cream, cough medicine and dog food, as well as items from national and local restaurants, the company said. The Cheesecake Factory, for instance, will offer frozen slices and ice cream on DashMart, and This Little Goat in Chicago will sell sauces and spices. Other restaurants on DashMart include Nando’s, Brother’s BBQ in Denver and Corey’s NYC Bagel Deli in Chicago.

Products from the curated selection will be available for delivery from centralized “micro-fulfillment” centers  in 30 minutes or less.

“We were thrilled to launch This Little Goat on DoorDash, so home cooks could quickly receive our globally inspired sauces and spices right to their front door, especially during quarantine,” said Erin Vick, director of digital marketing for This Little Goat in Chicago, in a statement.

DashMart is available in eight cities: Chicago, Minneapolis, Columbus, Cincinnati, Dallas, Salt Lake City, the greater Phoenix area, and Redwood City, Calif. It will be added soon in San Diego, Baltimore, Denver, Sacramento and Concord, Calif. These regions were identified as having limited convenience options, so DashMart is intended to give consumers in those places better access to that channel, a DoorDash spokesperson said.

Restaurants featured on DashMart pay the same fee they would to be included in the DoorDash marketplace, the spokesperson said.

This is not the delivery company’s first foray into delivering household items. DoorDash launched a convenience category in April, and has added more than 2,500 convenience stores to its platform to offer their products on-demand.

DashMart brings items from those retailers together along with grocery and restaurant goods in a single storefront within the DoorDash app.