Starbucks’ quarterly earnings call took a bit of an odd turn on Thursday when a question about tax reform ultimately led to a long diatribe from the company’s executive chairman about the future of cryptocurrencies.

For one thing, Howard Schultz is no fan of bitcoin.

“I don’t believe that bitcoin is going to be a currency today or in the future,” he said. 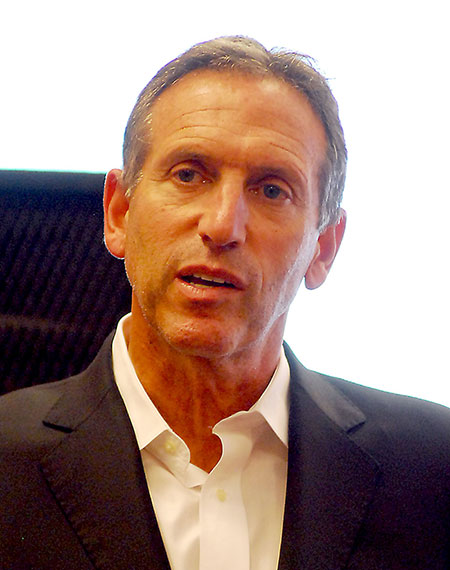 But Schultz does believe that Starbucks could be in a strong position once a trusted cryptocurrency does emerge.

Now, for those of you who don’t know, a cryptocurrency is a digital currency, which is supposed to be harder to counterfeit and easier to transfer, without government intervention. But it could also be subject to hacking and other computer-related problems. Bitcoin is a type of digital currency.

Such currencies are recorded on a digital ledger, also known as a blockchain.

Bitcoin has made news recently because it has skyrocketed in value as investors make big bets on the cryptocurrency being the future of spending. One bitcoin currently equals $11,000—suggesting the currency is the beneficiary of a massive bubble.

The problem with bitcoin and other digital currencies is that they have yet to be put into use in any major way at a restaurant or other retailer.

That doesn’t mean industry executives aren’t thinking about it. And Schultz’s comments show that some of them definitely are. Even if they don’t like bitcoin.

Those comments came as Schultz was defending Starbucks amid concern from analysts about the chain’s slow transaction growth in the quarter ended Dec. 31—a slowdown that has led to some concern about overdevelopment and which sent its stock down 5% Friday.

Schultz made it clear that the company isn’t currently investing in blockchain, nor does it have a plan to adopt digital currencies.

“I don’t want anyone to hang up on this call and assume that we have all this figured out, because we don’t,” Schultz said. “Or that we’re making a significant investment in this, because we’re not.”

But Schultz clearly believes his company has an opportunity to benefit from this technology over the long term.

Indeed, 11% of Starbucks’ U.S. transactions come through mobile order and payment. And more than a third of the company’s domestic sales comes from members of its Starbucks Rewards loyalty program. Its gift cards are practically currency themselves—one in six Americans received a Starbucks gift card this past holiday season.

If any company outside of, say, Domino’s Pizza would take a cryptocurrency, it would be Starbucks.

Schultz likened cryptocurrencies to the emergence of the internet more than 20 years ago, an emergence that has helped fuel the creation of some major corporate giants like Facebook, Google and Amazon.

“Do you understand and are you anticipating what could happen with cryptocurrencies?” he said. “I’m talking about a new technology of blockchain and the possibility of what could happen not in the near term, but in a few years from now with a consumer application, in which there is trust and legitimacy with regard to a digital currency.”

Schultz believes that there will one day be some digital currencies that are trusted, using blockchain technology. And he believes his company is positioned to take advantage of that future.

“I personally believe that there is going to be one or a few legitimate, trusted digital currencies off the blockchain technology,” he said. “And that legitimacy and trust in terms of consumer application will have to be legitimized by a brand and a brick-and-mortar environment, where the consumer has trust and confidence in the company that is providing that transaction.”

“If you believe that proposition is possible, how many companies or what company has the national or global footprint as well as the digital mobile payment confidence integrated into their existing business?” he added. “There are going to be a lot of winners and a lot of losers. But we are in a very unique position to take advantage of what other tech companies and the blockchain technology will provide to be in the mix of this and benefit financially.”

In short, Schultz is telling the world that Starbucks would be willing to accept a digital currency once a trusted form emerges. And he believes the company would be an important early adopter among retailers.

That’s important for anybody watching the cryptocurrency space. Because no currency will go far if it can’t be spent at a brick-and-mortar company. Starbucks, for all of its digital efforts, is a big brick-and-mortar retailer.