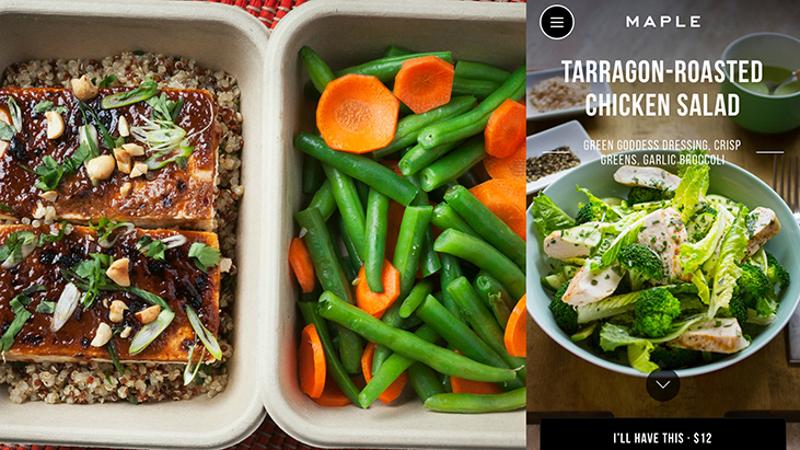 When Caleb Merkl asked himself how he would set up a delivery operation for today’s urban scene, he quickly realized that a restaurant in the traditional sense wasn't part of the answer.

“Great delivery is an entirely different challenge in NYC, a city that has no shortage of great restaurants,” said Merkl.  Why not drop the restaurant component and just do delivery? Why not just establish a place to prepare the food, a way to take orders and the means to deliver them? After all, wasn’t that the quantum leap Domino’s took in the 1970s and ‘80s?

The result is Maple, a nonrestaurant restaurant whose kitchen operations are overseen by famed Momofuku chef-operator David Chang. He serves as chief culinary officer, and Akshay Navle is chief operating officer, though operations don’t fit the usual definition.

Customers use Merkl’s Maple app to place a delivery order that is prepared in Chang’s downtown Manhattan kitchen and hauled to the patron’s home or office, which has to fall within Maple’s current delivery territory. The service is meant to rival third-party delivery operations like GrubHub and Postmates.

“Some pretty standard pain points fueled the whole thing when it comes to ordering food online,” said Merkl. “Questions like, ‘Why am I spending so much time trying to figure out what to order from a huge list of places, none of which are really set up to do delivery in the first place?’ Then realizing you’ll be out $25 by the time you’re done, the food will take an hour to show up and likely won’t be in great shape.”

Not opening an actual brick-and-mortar restaurant allowed Merkl and company to approach delivery with a blank slate.

“It certainly improves our cost structure and allows us more flexibility to scale,” he said. “We're taking a lot of that savings and putting it into the food so that our customers are getting a meal that they otherwise couldn't at our price points. The idea of an accessibly priced, balanced meal that doesn't come at the cost of ingredient integrity is pretty compelling to us.”

Ultimately, Maple plans to open a kitchen in every neighborhood it serves, which will limit the time it takes to transport meals from a kitchen to guests’ doors. But for the time being, Merkl said, the company is working to build a loyal customer base in its current delivery area.

“We're trying to build a company that is going to be here for decades to come,” he said. “This actually means slow-and-steady focused execution. The only thing we're thinking about right now is how to delight our customers day in and day out.”

Packaging was also extremely important to Maple.  It had to be environmentally friendly, with tolerance for a large temperature range and useable for a wide variety of foods.

“It had to be the exact right size and scale for our menu—which meant that it had to have a small enough footprint that the food wouldn't be shaken in transit, but was big enough to allow for generous portion sizes,” he said.

Navle and the rest of the team looked at more than 200 packaging options and tested the real-world applications of more than 90—putting food in them, sending them on bike rides, and testing temperature changes, solubility and environmental-friendliness—before making their final choices.

“We've already started work on the next iteration of packaging because it continues to be an area where we think we can do better,” said Navle.

What really makes Maple work, the Navle says, is the technology that runs it.

“Our technology enables us to do things at large scale that would be impossible even at a small scale without it,” he says.

That includes the customization of the POS, ticketing and expediting systems to Maple’s lone purpose.

Will Gaybrick, another Maple co-founder and partner at Thrive Capital—one of the technology companies who invested $22 million into the concept—was involved from the beginning, helping to craft the vision and even the details of the technology that continues to power their quest, Navle added.

The engineers have sat in kitchens and done extensive user testing with the culinary team to try to build out a product that matches exactly what Maple needs, and nothing more, Navle says. “They have reimagined the entire stack several times as we moved toward launch, and they continue to refine the vision as we learn more about what makes for a fantastic customer experience.”