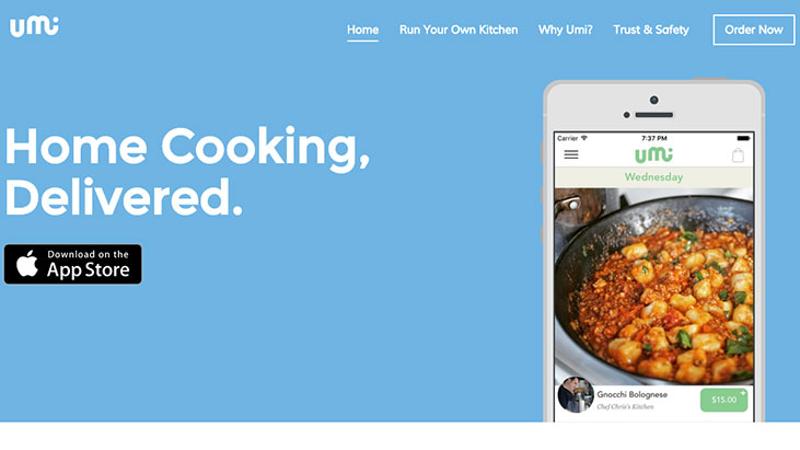 Competition from delivery-only concepts just got a little steeper with the launch of Umi Kitchen in Manhattan this month. Founded by a West Point grad, a former VP of Tumblr and restaurateur Danny Meyer’s daughter, Umi differs from most other dining room-free foodservice operations: Aiming to be the Uber of foodservice, it’s an app that connects diners to home cooks preparing meals in their own kitchens.

After his deployment, while in law school at Yale, co-founder Khalil Tawil found himself craving a home-cooked meal. He had ample restaurant options around him, but no time to cook. So he posted an ad on Craigslist, offering to pay for a home-cooked meal—and he had 17 responses within 48 hours. “I realized there was great potential for connecting home cooks with hungry consumers, so I joined forces with Hallie Meyer [a fellow Yale student], and we started building out the first community of Umi cooks,” he says. Meyer not only brings culinary chops to the partnership, but she's grown up in the restaurant business, bringing her father's insights—and funding—to Umi.

Food is picked up from the homes of Umi’s cooks and delivered to customers by Postmates. The menu—with options priced at $12, $14 or $16, plus the standard $3.99 PostMates delivery charge—offers a wide array of foods, from traditional Indian and Italian to vegan and Paleo diet-specific. In fact, the extreme broadness of home cooking was one of the most unexpected challenges for the Umi concept, says Tawil. “One of Umi’s greatest strengths is the sheer diversity of potential options available. … Figuring out how to unify all of those offerings under the banner of ‘home cooking’ has been a fun challenge to tackle,” he says. To solve for the vastness—as well as market some of the lesser-known ethnic foods—the team has been working with its home cooks on developing best practices around merchandising and telling the story behind those cuisines and methods of cooking.

Obviously, working with home cooks versus professional line cooks in commercial kitchens presents an extra set of challenges, compared to other nonrestaurant restaurants such as Ando, The Eat Purely Company, Maple and Sprig that are popping up across the country. “Before running an Umi kitchen, home cooks must go through an extensive screening, training and evaluation process,” Tawil says. These home cooks get Food Handler certified by ServSafe, and the Umi team conducts kitchen check-ups to ensure all kitchens meet Umi’s health, safety and quality standards, he says.

Before home cooks even get to that point, though, they go through what Tawil calls a rigorous vetting process. Potential cooks apply and submit three proposed menu items for the Umi culinary team to evaluate. Thus far, more than 400 people have applied, and Umi has about 50 home cooks in its stable. Those cooks aren’t preparing food every day, though. Umi Kitchen offers four to seven meal options each day from its app.

At this point, Umi Kitchen is solely mobile-based, which allows it to create the most personalized experience, says Tawil. At the same time, the owners are working to expand to web-based ordering in the future. It’s a convenient way to connect home cooks with hungry diners who don’t necessarily want a restaurant meal.

Umi’s founders won’t say that it’s a direct competitor of restaurants—but it is gunning for a share of the dinner dollar. “Food is a big space,” says Tawil. “Restaurants provide an entirely different customer experience than Umi, as do other more traditional home-cooking concepts out there, whether it’s grocery delivery, a meal kit, etc.” But Umi is taking advice—and funds—from well-known New York operators. It counts Danny Meyer as an investor and mentor, and the founders of better-for-you fast casual Sweetgreen have been involved and are investors, too.