From apps to tabletop tablets to self-ordering kiosks, the switch to consumer-facing technology is putting more tasks—and power—in the hands of the consumer. The  benefits are easy to see—more efficient ordering and payment options, leading to more table turns and higher profits. But while higher-ups at big chains insist that the turn to tech is meant as an enhancement, not replacement, for servers, there’s no denying that the implementation means a redefined position for servers within the restaurant. Here’s how the roles already have started to change in casual dining. 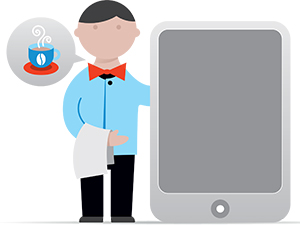 • Diners that opt to use Huntington Beach, Calif.-based BJ’s Restaurant & Brewhouse’s new app won’t see servers bringing menus, taking orders, dropping checks or making change. BJ’s chief executive Gregory Trojan said in an interview with Bloomberg Business that now that staff are relieved from these tasks—which get in the way of servers being able to be attentive—they can focus on their main job: being hospitable.

• Right before Minneapolis-based Buffalo Wild Wings ramped up its tabletop-tablet adoption this spring, the chicken chain added a new position, Guest Experience Captain. The new role functions alongside servers, essentially serving as a cruise-ship director, sampling menu items and planning events, but also increasing service efficiency by stepping in to help otherwise-occupied servers explain how to use the tablets.

• Applebee’s may be in the midst of a national tablet rollout, but it’s not taking ordering out of the servers’ hands … at least, not all the way. While the tablet has ordering functionality, servers must take the initial drink order and enter it into the system before guests can turn to the tech to request refills, giving staff a first go at some interaction as well as a segue to explain how the tablet works. —S.R.