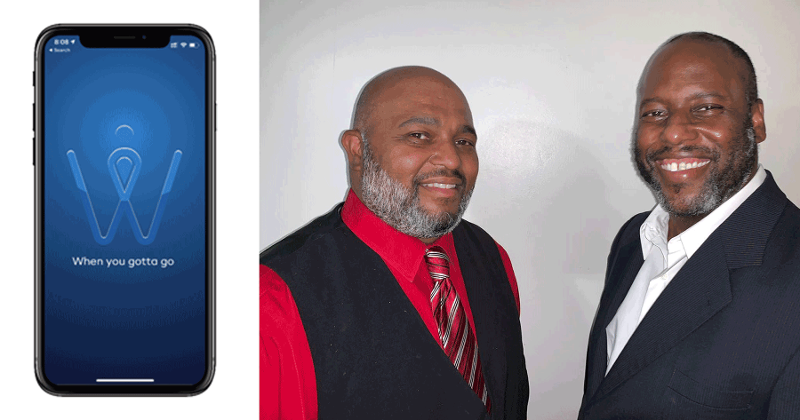 Photographs courtesy of The Whizz App

In this installment, RB looks at an app that shows nearby restaurants with public restrooms.

The technology: The Whizz App was created by a pair of third-party delivery drivers who identified an occupational hazard: They had a hard time finding restrooms while on the job.

“A lot of us carry cups in our cars,” said Whizz co-founder Robert Logan (pictured, at right). “‘Dude, we’re all peeing in a cup,’” he recalled saying to his fellow drivers. “‘What’s going on here?’”

Some restaurants do allow drivers to use their bathrooms while picking up an order, but the ratio was about 50-50, said co-founder Keith Crudupt. And that became even more difficult during the pandemic.

So they set out to solve the problem with an app that would show nearby restaurants where drivers could use the restroom. Logan taught himself to code and built it himself. And because it was impossible to track which restaurants were even open during the pandemic, Logan and Crudupt gathered that data themselves, checking off individual restaurants while doing deliveries.

The app doubles as a marketing tool for restaurants, which can partner with Whizz to offer meal discounts for users.

Whizz launched in June in Los Angeles with its first partner restaurant, WaBa Grill. The app has about 1,000 users, a number that has grown exponentially in October and November, Logan said.

How it works: Users download the app to view a map of nearby restaurants with restrooms available. Special icons highlight partner restaurants where users can get a deal on food. When a user comes into the restaurant, they show the app to an employee who grants restroom access.

Benefits: The benefits for drivers are obvious, but the app also provides a powerful marketing tool for partner restaurants via the discount feature.

“At the time [the user] comes aware of the offer, they’re either on the way to your store or already in your store,” said Mark Finnegan, VP of marketing and technology for WaBa. “It’s sort of the holy grail of location-based marketing.”

And Whizz users don’t need to use the restroom to get the discount. Logan and Crudupt said many will visit the restaurant just to order food.

Drawbacks: The app is only available in Los Angeles for now. The plan is to expand to other cities, but the app will need to first build a user base there for it to make sense for restaurants.

Cost: Restaurants can partner with The Whizz App for free to see how it works for them. After that, it will cost $69 a month per location.

Use case: WaBa has been involved with The Whizz App from the beginning, with Finnegan advising the developers on the marketing element. He initially saw Whizz as a way to help fulfill WaBa’s mission of giving back to drivers who had helped support the chain during the pandemic. The marketing opportunity was a bonus.

“It’s not often you find something that benefits your business and also does a lot of good,” he said.

The LA-based bowl chain has partnered with the app at 200 locations, offering deals such as 20% off a chicken bowl and drink. Visits driven by Whizz have been low compared to other forms of advertising, Finnegan said, but the conversion rate is high: At some locations, about 30% or 40% of Whizz visits turn into transactions.

He acknowledged there could be a novelty factor contributing to that, “But it’s starting at a high base, and I think it really has legs.”

RB’s take: It’s still early, but the app has shown clear benefits for both drivers and restaurants. Implementation seems simple, and with an opportunity to try it for free, the risk for restaurants is minimal. Expanding to new markets might be tough during the pandemic, but there’s still plenty of room for Whizz to grow and prove itself in LA.